Creatures of Passage- by Morowa Yejide - Feature and Review 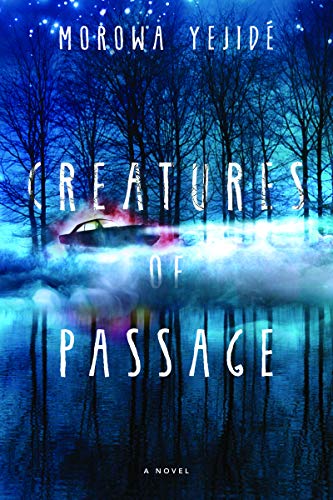 ABOUT THE BOOK:
With echoes of Toni Morrison’s Beloved, Yejidé’s novel explores a forgotten quadrant of Washington, DC, and the ghosts that haunt it.Nephthys Kinwell is a taxi driver of sorts in Washington, DC, ferrying ill-fated passengers in a haunted car: a 1967 Plymouth Belvedere with a ghost in the trunk. Endless rides and alcohol help her manage her grief over the death of her twin brother, Osiris, who was murdered and dumped in the Anacostia River.Unknown to Nephthys when the novel opens in 1977, her estranged great-nephew, ten-year-old Dash, is finding himself drawn to the banks of that very same river. It is there that Dash--reeling from having witnessed an act of molestation at his school, but still questioning what and who he saw--has charmed conversations with a mysterious figure he calls the "River Man," who somehow appears each time he goes there.When Dash arrives unexpectedly at Nephthys's door one day bearing a cryptic note about his unusual conversations with the River Man, Nephthys must face both the family she abandoned and what frightens her most when she looks in the mirror.Creatures of Passage beautifully threads together the stories of Nephthys, Dash, and others both living and dead. Morowa Yejidé's deeply captivating novel shows us an unseen Washington filled with otherworldly landscapes, flawed super-humans, and reluctant ghosts, and brings together a community intent on saving one young boy in order to reclaim themselves.

Creatures of Passage by Morowa Yejide
My rating: 4 of 5 stars

Creatures of Passage by Morowa Yejide is a 2021 Akashic Books publication.

Nephthys Kinwell drives a haunted 1967 Plymouth. As she sits behind the wheel, the car will be enveloped in fog that allows Nephthys to taxi certain passengers to unique destinations.

Nephthys battles her own alcoholic demons, brought on by the death of her twin, and is recently made worse by her worries for her young grand- nephew, Dash, who talks to a ‘River Man’ no one else can see…

This book arrived in my mailbox just as I was lining up my lighter summer ‘beach’ reads. I tried reading the book twice during the summer, but both times I was unable to give the book the undivided attention it required.


As the temps cooled down, my mood changed accordingly, and I found this book calling to me again- and as they say- the third time was the charm.

The novel is not all that long- but it is a densely plotted novel with multiple threads, timeframe shifts, and a large cast of characters, which can be a little confusing if one isn’t paying close enough attention.

The writing doesn't appear at all cohesive, in the beginning, which added to my initial struggle- but once I grasped the connections, and the pieces began to click into place, I began to fall under the spell of the lush prose, and the building tension, which was mingled with an underlying melancholy.

The story is set in Washington, D.C.’s Anacostia neighborhood during the 70s - but in a re-imagined- world building manner. Those familiar with this area will certainly understand the author’s view- but for those unfamiliar with the neighborhood’s history, the imagery might not have the same impact.

This is a story centered around both the living and the dead. The novel visits, grief and anger, fear and pain, as well as criminal intent and dread.

The story strives for peace, healing, and understanding amid danger and the unknown. The language and various locations, worldly or otherwise, are mythical and entrancing. The atmosphere is often heavy and moody, but there’s a ray of hope for the characters I found myself quite concerned about, and for some there was long awaited peace.

I am still struggling with how to define this book. While surely, due to the supernatural nature of the story, it could be- and has been- categorized as horror- but while the story is scary, tense, and unsettling- this is not horror in the traditional sense-

Unless we put horror in the same frame as magic realism- which is where this book truly lands, in my opinion. It leans towards the spiritual and could fit right into the fantasy genre- but with a crime fiction element.

It's also technically a novel of historical fiction- but with the various shades of symbolism and allegory involved, the story has literary value, as well.

The book portrays America through both a realistic and fantastical lens, with spiritual battles leading the way to physical ones, taking the reader along for an epic, almost heart-stopping climax.

This small book packs a big punch. The author has a huge imagination. The writing, though very unconventional, is well-done. This novel is certainly different from anything else I’ve read in a good long while. I will be keeping my eye on this an author!! 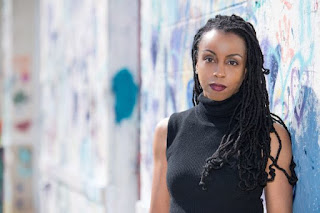 MOROWA YEJIDÉ, a native of Washington, DC, is the author of the critically acclaimed novel Time of the Locust, which was a 2012 finalist for the PEN/Bellwether Prize, long-listed for the 2015 PEN/Bingham Prize, and a 2015 NAACP Image Award nominee. She lives in the DC area with her husband and three sons. Creatures of Passage is her second novel.