The Darkest Flower by Kristin Wright - Feature and Review 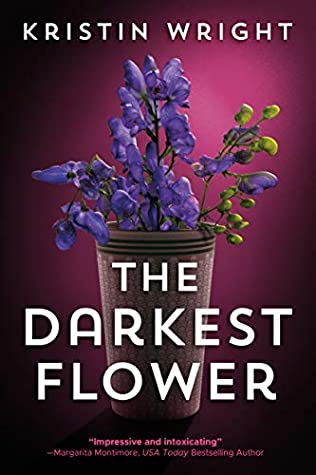 You’ll never believe the terrible things being said about the perfect president of the PTA.

Attempted murder? Inexplicable accident? Either way, a PTA mom struggled for her life in an elementary school cafeteria, poisoned by wolfsbane. Now all eyes are on the accused, the victim, and a woman hired to look deeper.

Ambitious defense attorney and single mother Allison Barton is anxious to escape the shadow of the low-down dog of a marquee partner carrying their renowned Virginia law firm. A win for her high-profile new client will give Allison the career she deserves. And PTA president Kira Grant certainly appears innocent—except for the toxic bloom in her backyard and perhaps a bit of a malicious streak. But no one said the innocent had to be likable—or entirely honest. Besides, with an image as carefully cultivated as her garden, Kira would be insane to risk everything on something as outrageous as the attempted murder of one of her closest friends.

What about those in Kira’s orbit, a sunny suburb of moms behaving badly? What do they really know about Kira? What does Kira know about them? For Allison, the answers are getting darker every day.

The Darkest Flower by Kristin Wright
My rating: 4 of 5 stars

The Darkest Flower by Kristin Wright is a 2021 Thomas & Mercer publication.

When Kira Grant, a PTA president, is accused of trying to poison one of the other mothers, she hires Allison Barton to defend her.

Kira has always lived a life of privilege and has no earthly idea what it is like to struggle. Be that as it may, she’s convinced her husband is having an affair, is in denial about her daughter’s dyslexia, and truly believes she is right about everything.

Then Kira is accused of murder- and faces some true adversity in her life for a change- but she’s so sure of herself and so convinced she knows better than Allison, she tries to micro- manage, manipulate and control the entire investigation. She gives Allison fits – but Allison is far more formidable than she’s been credited with.

The problem is, the deeper Allison digs the more suspects she turns up- and the possible motives are beyond twisted!! But the fact remains:
Someone tried to commit murder-right there in front of a bunch of school children, any of whom could have been an accidental casualty in the plot, and Allison will stop at nothing to discover the truth…

I thoroughly enjoyed this book. I love legal thrillers, but I seldom find one anymore that combines much courtroom action with the investigation angles. This book not only balanced the two, but gave the genre a big quirky breath of fresh air.

This book was pure entertainment. It’s easy to read, fast-paced, though some of the characterizations are nearly cartoonish at times- except for Allison- who plays a more stereotypical role-but is our true protagonist- despite Kira’s flamboyant personality nearly drowning her out much of the time.

While the book has a few mixed reviews, I thought it was unique, perhaps a bit satirical- or darkly humorous, though I wasn’t quite sure that was what the author intended.

If you don’t take it too seriously, you might be able to enjoy it just for the pure fun of it. There’s a nice little twist at the end, too. Others have claimed to have seen it coming a mile off- but as jaded as I am- I didn’t figure it all the way out. Then, once the truth was revealed, I realized the story was maybe a bit darker than I’d give it credit for.

This is yet another book I’ve read this past month that was a little out the box- and it is another book that might not be suited for everyone- but I enjoyed it well enough. 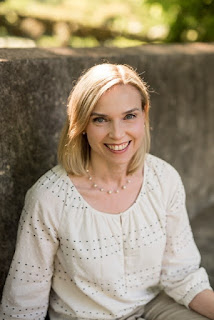 Kristin Wright is a graduate of the University of Michigan Law School and has simultaneously been a small-town general practice lawyer handling criminal defense and the vice president of the elementary school PTA. She lives in Virginia with her husband, sons, and two beagles. For more information about the author visit www.kristinbwright.com.
Posted by gpangel at 11:00 PM