What the Devil Knows- by C.S. Harris- Feature and Review 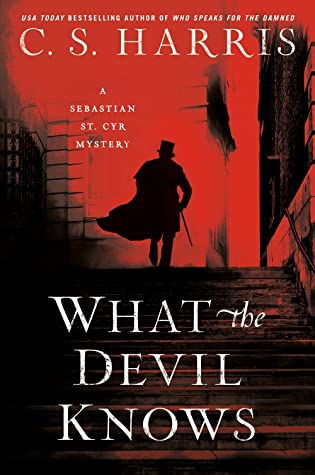 ABOUT THE BOOK:
Sebastian St. Cyr thought a notorious serial killer had been brought to justice until a shocking series of gruesome new murders stuns the city in this thrilling historical mystery from the USA Today bestselling author of Who Speaks for the Damned.

It's October 1814. The war with France is finally over and Europe's diplomats are convening in Vienna for a conference that will put their world back together. With peace finally at hand, London suddenly finds itself in the grip of a series of heinous murders eerily similar to the Ratcliffe Highway murders of three years before.

In 1811, two entire families were viciously murdered in their homes. A suspect--a young seaman named John Williams--was arrested. But before he could be brought to trial, Williams hanged himself in his cell. The murders ceased, and London slowly began to breathe easier. But when the lead investigator, Sir Edwin Pym, is killed in the same brutal way three years later and others possibly connected to the original case meet violent ends, the city is paralyzed with terror once more.

Was the wrong man arrested for the murders? Bow Street magistrate Sir Henry Lovejoy turns to his friend Sebastian St. Cyr, Viscount Devlin, for assistance. Pym's colleagues are convinced his manner of death is a coincidence, but Sebastian has his doubts. The more he looks into the three-year-old murders, the more certain he becomes that the hapless John Williams was not the real killer. Which begs the question--who was and why are they dead set on killing again?
LISTEN TO AN EXCERPT:
MY REVIEW:

What the Devil Knows by C.S. Harris
My rating: 4 of 5 stars

What the Devil Knows by C.S. Harris is a 2021 Berkley publication.

When a magistrate and a seaman are both murdered in a similar fashion, using the same modus operandi as the Ratcliffe Highway Murders, three years prior, Sebastian is asked to aid in the investigation. The case is especially tricky as The Highway murderer was presumably caught- but committed suicide. It then stands to reason that this present- day killer couldn’t be the same person- right?

What connection does a magistrate, a seaman, and the violent murders of two families have in common? Sebastian soon begins to uncover a web of corruption designed to protect the hierarchy and continue to greedily line the pockets of the affluent…

This installment in the long-running series is very complex! It’s a smart, carefully crafted plot and commanded my undivided attention. As always, the vivid descriptions help to create the palpable atmosphere that makes this series so effective. I’m also on pins and needles about the developments with Hero’s father and the news concerning Sebastian’s mother.

The mystery was one of the better ones in the series- the intrigue, social commentary, and the fabulous characterization keep this series at the top of my favorites list! C. S. Harris, aka Candice Proctor, is the USA TODAY bestselling author of the Sebastian St. Cyr mystery series, the C. S. Graham contemporary thriller series, seven historical romances,, and the standalone Civil War historical GOOD TIME COMING. An Air Force brat who grew up exploring castles in Spain and fishing in the mountains of Oregon and Idaho, Candy later worked as an archaeologist and earned a PhD in European history. A former academic who has lived all over the world, she now makes her home in New Orleans with her husband, former intelligence officer Steven Harris. Visit her website at www.csharris.net.