The Atmospherians by Alex McElroy - Feature and Review 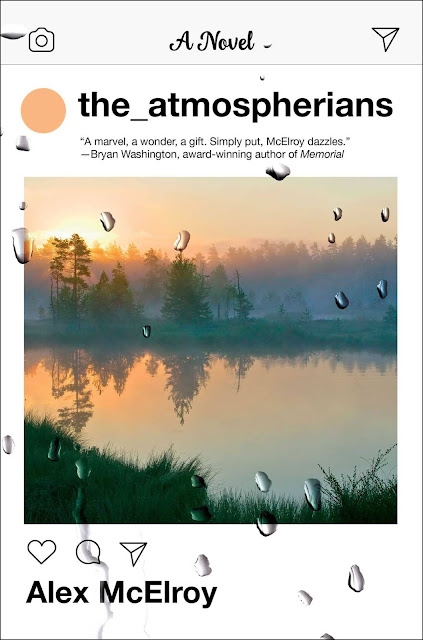 A “dazzling” (Bryan Washington, author of Memorial and Lot ) and brilliantly satirical debut novel for fans of Women Talking and Red Clocks about two best friends—a disgraced influencer and a struggling actor—who form The Atmosphere, a cult designed to reform problematic men.

Sasha Marcus was once the epitome of contemporary success: an internet sensation, social media darling, and a creator of a high profile wellness brand for women. But a confrontation with an abusive troll has taken a horrifying turn, and now she’s at rock bottom: canceled and doxxed online, fired from her waitress job and fortressed in her apartment while men’s rights protestors rage outside. All that once glittered now condemns.

Sasha confides in her oldest childhood friend, Dyson—a failed actor with a history of body issues—who hatches a plan for Sasha to restore her reputation by becoming the face of his new business venture, The Atmosphere: a rehabilitation community for men. Based in an abandoned summer camp and billed as a workshop for job training, it is actually a rigorous program designed to rid men of their toxic masculinity and heal them physically, emotionally, and socially. Sasha has little choice but to accept. But what horrors await her as the resident female leader of a crew of washed up, desperate men? And what exactly does Dyson want?

Explosive and wickedly funny, this “Fight Club for the millennial generation” (Mat Johnson, author of Pym) peers straight into the dark heart of wellness and woke-ness, self-mythology and self-awareness, by asking what happens when we become addicted to the performance of ourselves.
LISTEN TO AN EXCERPT:
MY REVIEW:

The Atmospherians by Alex McElroy
My rating: 4 of 5 stars

The Atmospherians by Alex McElroy is a 2021 Atria Books publication.

Okay- well, that was different- in a good way!

Satire is hard to balance, but if it is done right, I love it! This book hits an uncomfortable mark as it examines influencers, toxic masculinity, and body image, and perhaps the role we play in it.

Sasha is a successful influencer, until an unforeseen tragedy sends her popularity plummeting, turning her into a pariah in an instant. At the height of her anxiety, her old friend, Dyson, approaches her with a opportunity. He wants Sasha to be the face of his planned cult, which will be disguised as a workshop for men hoping to cure themselves of their toxic masculinity. They will name the cult ‘The Atmosphere’ and the members will be called ‘The Atmopsherians. ‘

Desperate to escape the frightening reality of her life, Sasha agrees to join Dyson at an abandoned summer camp where they will invite a specific number of men, from a curated list of candidates, to join them. Upon arrival, these men will dedicate their lives to cleansing themselves of their ingrained traits of toxic masculinity.

As the cult grows more bizarre, as the only woman at the camp, Sasha walks a fine line, especially since she only agreed to this madness out of pure desperation.

Sometimes a point is best made through satire. Preparing oneself for anything satirical, means accepting that you are being made fun of, in a sarcastic, occasionally caustic manner. This novel is a parody, with laugh out loud funny moments, but the truth is, it wouldn’t be funny, if there wasn’t some truth in it.

Satire can also be rather dark, and this novel has some gruesome moments- so be warned. Mostly, though, the book definitely hits on the pulse, and components of our current culture and society, and does so with searing and occasional graphic stabs at some very serious topics.

One must look at the whole picture, to understand what’s being said here. It’s not just a localized bashing, it’s open season on all of society.

Typically, the word ‘cult’ in a book synopsis will draw me in like a moth to a flame. But, in this situation, the cult, an ingenious move on the author’s part, is one of the most screwball cults ever, making the setup seem more like a means to an end- but it’s the perfect environment to examine all the issues at play and a perfect opportunity to ponder the ways in which we might contribute to them.

For me, though, I thought the most important theme was how our society is addicted to self- performance, always ‘on’ … being followed, observed, and recorded, by an enormous audience on social media platforms and YouTube, with people overrating their own importance, while overlooking troublesome issues, such as the impact or consequences of their ‘influence’- and to what end?

This is a strange little book, I must say, but I got a kick out it, dark though it was at times. It was hilarious, clever, and serious, very well- written, and smart. You may recognize yourself in this book, but, even if you are like me, and don’t follow all that wellness and influencing stuff, you’ll recognize the characters for who and what they represent. The message is there for you to decipher, either on the surface or on a deeper level.

Maybe someday, we’ll all get lucky, and someone will intentionally topple the whole house cards, even if it is only to escape their own self- made trap. Maybe then, people will awaken, as if from a long sleep, and return to building real relationships again- one's based on morals, merit and principle, instead of popularity, influence, or performance.

Overall, I liked this book- it’s funny, sure- but remember- satire often exposes the underbelly in such a way to avoid strident offense. One has to be able to read between the lines of the exaggerated scenarios to see the way it exposes some unflattering, but important insights and promotes independent thought. 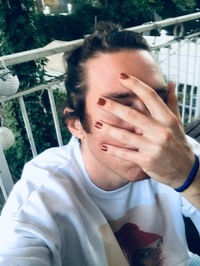 Alex McElroy is a nonbinary writer based in Brooklyn. Their first novel, The Atmospherians, will be published by Atria in 2021. Other writing appears in Vice, The Atlantic, Tin House, TriQuarterly, New England Review, and their first book, Daddy Issues, was published in 2017.​Alex has received fellowships from The Bread Loaf Writers' Conference, The Tin House Summer Workshop, The Sewanee Writers Conference, The Inprint Foundation, The Elizabeth George Foundation, and The National Parks Service.
Posted by gpangel at 11:00 PM