Death by Shakespeare by Kathryn Harkup- Feature and Review 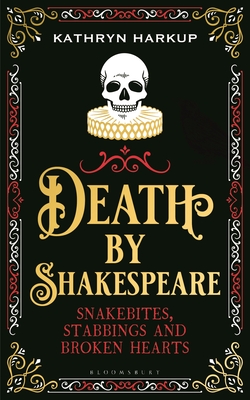 ABOUT THE BOOK:
An in-depth look at the science behind the creative methods Shakespeare used to kill off his characters.In Death By Shakespeare, Kathryn Harkup, best-selling author of A is for Arsenic and expert on the more gruesome side of science, turns her expertise to Shakespeare and the creative methods he used to kill off his characters. Is death by snakebite really as serene as Cleopatra made it seem? How did Juliet appear dead for 72 hours only to be revived in perfect health? Can you really kill someone by pouring poison in their ear? How long would it take before Lady Macbeth died from lack of sleep? Readers will find out exactly how all the iconic death scenes that have thrilled audiences for centuries would play out in real life.In the Bard's day death was a part of everyday life. Plague, pestilence and public executions were a common occurrence, and the chances of seeing a dead or dying body on the way home from the theater was a fairly likely scenario. Death is one of the major themes that reoccurs constantly throughout Shakespeare's canon, and he certainly didn't shy away from portraying the bloody reality of death on the stage. He didn't have to invent gruesome or novel ways to kill off his characters when everyday experience provided plenty of inspiration.Shakespeare's era was also a time of huge scientific advance. The human body, its construction and how it was affected by disease came under scrutiny, overturning more than a thousand years of received Greek wisdom, and Shakespeare himself hinted at these new scientific discoveries and medical advances in his writing, such as circulation of the blood and treatments for syphilis.Shakespeare found 74 different ways to kill off his characters, and audiences today still enjoy the same reactions--shock, sadness, fear--that they did over 400 years ago when these plays were first performed. But how realistic are these deaths, and did Shakespeare have the science to back them up?
LISTEN TO AN EXCERPT:
Bloomsbury Publishing · Death By Shakespeare by Kathryn Harkup, read by Nicky Diss

Death by Shakespeare: Snakebites, Stabbings and Broken Hearts by Kathryn Harkup
My rating: 4 of 5 stars

Death by Shakespeare: Snakebites, Stabbings, and Broken Hearts by Kathryn Harkup is a 2020 Bloomsbury SIGMA publication.

I am nowhere close to being an expert on Shakespeare, knowing the bare basics at best. Yet, when this book popped up on my radar, I thought it sounded interesting.

This book is a well-researched, detailed study of the various means in which Shakespeare killed off his characters, and how historically and scientifically authentic those death scenes were, compared to the knowledge we have at our disposal today.

While Shakespeare is known for both comedies and tragedies, high drama, intrigue, romance and heartbreak, as we well know, death sells, and Shakespeare provided plenty of it. There were executions, battles, poisonings, plagues, and suicides, to name a few.

I’m not sure how often the authenticity or accuracy of Shakespeare’s death scenes have been questioned or scrutinized over the years, but this author has taken the Herculean task to heart, and her findings are quite surprising.

So, how well did the Bard do? Was he way off course, or astonishingly close to the mark?

Well, you’ll have to read the book to find out. I will give you a few hints, though. Shakespeare did have a few sources at his disposal, providing him with inside information on various subjects, which did help add legitimacy to his writing.

On the other hand, he was woefully off base in some cases- but one also should consider that some scenes were embellished upon by the stage performers, more for dramatic effect than for accuracy.

I’m wondering how many people are taught this information when studying Shakespeare. If they are not, they are missing out on some of the finer points of his writing. People living in the 1500s may have taken things at face value, but they did have the advantage of fully understanding some of the little inside jokes- and I’m not sure how aware the modern student might be of the full context of those nuances.

Overall, trust me, you don’t need to know a lot about Shakespeare, or even like Shakespeare, to enjoy this book. The science is a big promotional point, I’ve noticed, and I agree the author really did pay attention to detail and it is obvious she knows her stuff, but the history is what appealed to me the most.

Because of the subject matter, one might think this book is a bit morbid, and yes, there are some pretty lurid and gross descriptions and details included in the book, but despite that, I learned a great many things I might never have discovered otherwise, and the presentation was actually quite entertaining!

I don’t recall how I stumbled across this book, but I’m very glad I did! 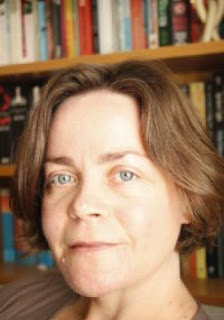 Kathryn Harkup is a chemist and author. Kathryn completed a PhD then a postdoc at the University of York before realising that talking, writing and demonstrating science appealed far more than spending hours slaving over a hot fume-hood. Kathryn went on to run outreach in engineering, computing, physics and maths at the University of Surrey, which involved writing talks on science and engineering topics that would appeal to bored teenagers, and she is now a science communicator delivering talks and workshops on the quirky side of science.
Posted by gpangel at 11:00 PM