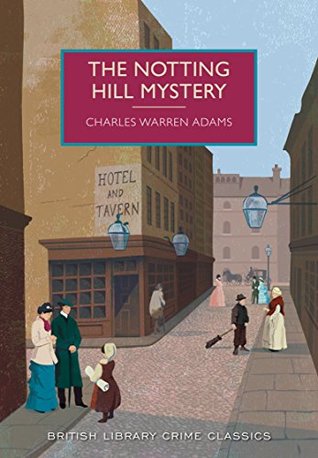 ABOUT THE BOOK:
The Notting Hill Mystery has been widely described as the first detective novel. The story is told by the insurance investigator Ralph Henderson, who is building a case against the sinister Baron R___, suspected of murdering his wife in order to claim her life insurance. Henderson descends into a maze of intrigue, including a diabolical mesmerist, kidnapping by gypsies, slow-poisoners, a rich uncle's will and three murders.Presented in the form of diary entries, family letters, chemical analysis reports, interviews with witnesses and a crime scene map, the novel displays innovative techniques that would not become common features of detective fiction until the 1920s. This novel launched the British Library Crime Classics series in 2012, and is now reissued with a striking new cover design.
LISTEN TO AN EXCERPT:
MY REVIEW:

The Notting Hill Mystery by Charles Warren Adams
My rating: 4 of 5 stars

Ralph Henderson is an insurance investigator who carefully lays out a solid case of insurance fraud and murder. Much like a police detective would, he uses good old -fashioned shoe leather to conduct interviews and gather evidence. Then, he presents his case in writing, almost like a lawyer would do to convince a jury-who, in this case, happens to be you- the reader!

The details are fascinating, if a bit melodramatic. The Baron R is the prime suspect and poisoning appears to be his modus operandi… that and his talents as Mesmerist. There are a few surprising twists before all is said and done, keeping things interesting- if a bit far-fetched.

The modern reader would probably pan this book today. Some un-PC threads, (a kidnapping by a band of ‘Gypsies’), and implausible plot devices, although popular at the time the book was written, might turn some readers off today.

Other than that, what makes this book stand out, like the synopsis states, is that it is believed to be the first full length detective novel. The book could also technically pass as an inverted mystery, as it is clear right from the get-go who the murderer is. The reader remains interested because they want to see how the murderers were committed. I think this book does set a standard for the future of mystery novels and for that reason, I think mystery lovers might find this book of interest.

It is also Henderson’s presentation of the facts that kept me invested in the story. It would have been nice to see him return in subsequent installments, to see his character fleshed out a bit, because he is quite good at his job. I found myself wondering about his looks, his private life, etc.

This one is worth checking out for its historical value and contribution to crime fiction. The British Crime Library has a nice selection of these classic mysteries available in digital format. I’m looking forward to exploring more of them this year!
3.5 stars

*Just to be clear, the publishing date is for the release in digital format. The book was not written in present day, but set in the 1800s. This is NOT historical fiction as I have seen some categorize it as such. 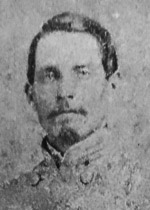 Charles Warren Adams (1833-1903) was an English lawyer, publisher and anti-vivisectionist, now known from documentary evidence to have been the author of The Notting Hill Mystery. This is usually taken to be the first full-length detective novel in English.Born in 1833, he was the son of children's author Charlotte Adams, and the younger half-brother of clergymen and authors William Adams and Henry Cadwallader Adams. As a lawyer, Adams was involved in the bailout of the publishing firm Saunders, Otley & Co., which published his crime novel Velvet Lawn (1864) and detective novel The Notting Hill Mystery (1865) under the pseudonym Charles Felix. He died in 1903.
Posted by gpangel at 11:00 PM