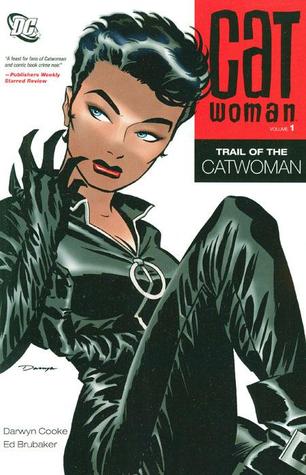 For years, Selina Kyle has prowled the skyline of Gotham City as its most famous thief, Catwoman. But when word spreads of Catwoman's demise, Selina decides to leave the costumed world behind and continue her trade cloaked in the shadows. Unable to enjoy her newfound anonymity for too long though, Selina decides that she must return to her infamous persona. Donning a new costume and attitude, Catwoman returns to the streets and sets her sights on the serial killer that has been preying upon the streetwalkers she calls friends.

Catwoman, Volume 1: Trail of the Catwoman by Ed Brubaker
My rating: 4 of 5 stars

Catwoman Volume one: Trail of the Catwoman is a 2012 DC Comics publication. (Originally published in 2008)

Because I named my new kitten, Selina, after Catwoman, it was only fitting that I catch up on a few Catwoman comics for fun. There are SO many to choose from, I had a hard time deciding where to begin. This one was on Hoopla and it seemed to be well received- so I thought this might be a good place to dive in.

Why I am drawn to the Catwoman character is her complexity. She’s got a painful past, has not always walked on good side of the law, but is a character who wants to be a good person-at least in this volume of stories.

In this collection, Selina has faked her own death. She returns to Gotham City, has a little bit of a makeover, and then begins doing some detective work, hoping to find a serial killer targeting sex -workers. 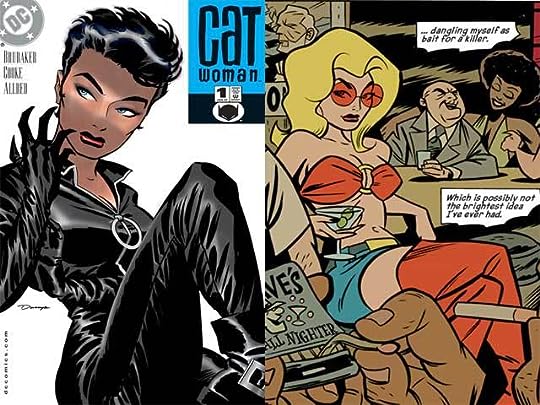 The action takes place in the East End where the people need an equalizer of Catwoman’s caliber.

The first part of the novel is part heist, part noir, and sets the stage Selina/Catwoman’s new outlook on life.

I enjoyed the graphics, dialogue and stories included in this collection. I have even more angles of Catwoman to ponder on and found this volume to be entertaining and a nice diversion for me. Now on to Volume 2. 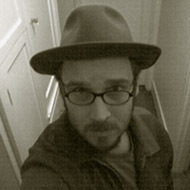 Ed Brubaker (born November 17, 1966) is an Eisner Award-winning American cartoonist and writer. He was born at the National Naval Medical Center, Bethesda, Maryland.Brubaker is best known for his work as a comic book writer on such titles as Batman, Daredevil, Captain America, Iron Fist, Catwoman, Gotham Central and Uncanny X-Men. In more recent years, he has focused solely on creator-owned titles for Image Comics, such as Fatale, Criminal, Velvet and Kill or Be Killed.In 2016, Brubaker ventured into television, joining the writing staff of the HBO series Westworld. 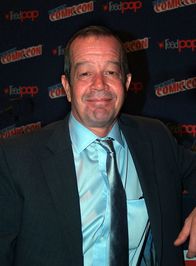 Darwyn Cooke was an Eisner Award winning comic book writer, artist, cartoonist and animator, best known for his work on the comic books Catwoman, DC: The New Frontier and Will Eisner's The Spirit.

In 1985, Cooke published his first comic book work as a professional artist in a short story in New Talent Showcase #19, but economic pressure made him leave the career and he worked in Canada as a magazine art director, graphic and product designer for the next 15 years.

In the early 1990s Cooke decided to return to comics, but found little interest for his work at the major publishers. Eventually he was hired by Warner Bros. Animation after replying to an ad placed by animator Bruce Timm.

DC Comics then approached Cooke about a project which he had submitted to the publisher years earlier which eventually became Batman: Ego, a graphic novel published in 2000.

The critical success of that project led to Cooke taking on more freelance work, such as X-Force, Wolverine/Doop and Spider-Man's Tangled Web for Marvel Comics and Just Imagine... Stan Lee for DC.

In 2001, Cooke and writer Ed Brubaker teamed up to revamp the Catwoman character. They started with a 4 issue serial "Trail of the Catwoman" in Detective Comics #759-762 in which private detective Slam Bradley attempts to investigate the death of Selina Kyle (AKA Catwoman).

The story led into a new Catwoman title in late 2001 by Brubaker and Cooke, in which the character's costume, supporting cast and modus operandi were all redesigned and redeveloped. Cooke would stay on the series, which was met with critical and fan acclaim, up until issue #4. In 2002 he would write and draw a prequel, the Selina's Big Score graphic novel which detailed what had happened to the character directly before her new series.
Cover to DC: The New Frontier #6.
Cover to DC: The New Frontier #6.

Cooke's next project was the ambitious DC: The New Frontier (2004), a six issue miniseries which sought to tell an epic storyline bridging the gap between the end of the golden and the start of the silver age of comic books in the DC Universe. The story, which was set in the 1950s, featured dozens of super-hero characters and drew inspiration from the comic books and movies of the period as well as from Tom Wolfe's non-fiction account of the start of the US Space Program The Right Stuff. The major DC characters are introduced in "The New Frontier" in the same order that DC originally published them, even down to the correct month and year in the story's timeline. In 2005, Cooke won an Eisner Award for "Best Limited Series", and a Joe Shuster Award for "Outstanding Canadian Comic Book Cartoonist" for his work on the series.

In July 2005, it was announced that in 2006 Cooke and writer Jeph Loeb would produce a Batman/Spirit crossover, to be followed shortly afterwards by an ongoing Spirit series written and drawn by Cooke. Batman/The Spirit was ultimately published in November 2006, followed in December by the first issue of Cooke's The Spirit. In June 2007, Cooke and J. Bone won a Joe Shuster Award for "Outstanding Canadian Comic Book Artists" for their work on "Batman/The Spirit", and Cooke won "Outstanding Canadian Comic Book Cartoonist" for his work on "The Spirit".
Posted by gpangel at 11:00 PM