My Dark Vanessa by Kate Elizabeth Russell- Feature and Review 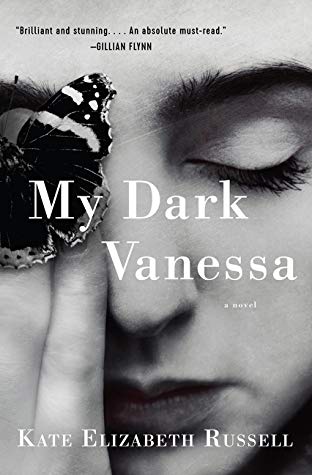 Exploring the psychological dynamics of the relationship between a precocious yet and her magnetic and manipulative teacher, a brilliant, all-consuming read that marks the explosive debut of an extraordinary new writer.

2000. Bright, ambitious, and yearning for adulthood, fifteen-year-old Vanessa Wye becomes entangled in an affair with Jacob , her magnetic and guileful forty-two-year-old English teacher.

2017. Amid the rising wave of allegations against powerful men, a reckoning is coming due. has been accused of sexual abuse by a former student, who reaches out to Vanessa, and now Vanessa suddenly finds herself facing an impossible choice: remain silent, firm in the belief that her teenage self willingly engaged in this relationship, or redefine herself and the events of her past. But how can Vanessa reject her first love, the man who fundamentally transformed her and has been a persistent presence in her life? Is it possible that the man she loved as a teenager—and who professed to worship only her—may be far different from what she has always believed?

Alternating between Vanessa’s present and her past, My Dark Vanessa juxtaposes memory and trauma with the breathless excitement of a teenage girl discovering the power her own body can wield. Thought-provoking and impossible to put down, this is a masterful portrayal of troubled adolescence and its repercussions that raises vital questions about , consent, complicity, and . Written with the haunting intimacy of The Girls and the creeping intensity of Room, My Dark Vanessa is an era-defining novel that brilliantly captures and reflects the shifting cultural mores transforming our relationships and society itself.

My Dark Vanessa by Kate Elizabeth Russell
My rating: 5 of 5 stars

My Dark Vanessa by Kate Elizabeth Russell is a 2020 William Morrow publication.


By now we’ve all heard the stories and have seen male and female teachers arrested for abusing their positions and embarking on inappropriate relationships with their students. I could tell you stories about things that happened way back when I was in high school, and things that happened at my children’s high school, where teachers crossed lines with their students. It is more widely reported now, almost to the point where it seems commonplace.

While we often get caught up in the feeling of betrayal we have, which is caused by someone we trusted to uphold our values, to be a mentor to our kids by setting an example, and of course, by obeying the law, we overlook the long lasting ramifications for those who were seduced- often with careful manipulation, by these men and women we have entrusted our children to, gradually luring in the most vulnerable with their attentiveness and flattery.

This book explores the psychological damage and the cruel emotional trauma left on one young victim, Vanessa Wye, who at fifteen, was seduced by Jacob , a forty-two -year old teacher, at her school.

These emotional scars never fully healed, continuously reopened, constantly bleeding, and infecting this young woman, who simply could not move forward and live up to her full potential- nor could she maintain friendships or a normal relationship with another man, and simply could not admit to what is so obvious to others.

"Because even if I sometimes use the word abuse to describe certain things that were done to me, in someone else's mouth the word turns ugly and absolute...It swallows me and all the times I wanted it, begged for it"

Don’t let them fool you. They are as vulnerable, sensitive, confused and insecure as ever. They cope with incredible pressure to conform, be accepted, and to do things they are emotionally unprepared for.

They are just as capable of falling under the spell of someone older, seemingly more sophisticated, someone they admire or look up to, whose attention is flattering and alluring, as more innocent generations before them. It can be quite heady and intense, making it hard for them to fully understand that they are indeed the victim in all this.

Vanessa, who is often paralleled with Lolita or, in some cases it might be a juxtaposition, falls straight into Jacob’s trap, as we helplessly stand by and watch.

It’s a struggle to see her life spiral out of control, and resign herself to a life of dark obsession, and living well below her intellectual means.

The psychological damage Vanessa endures is the reason I gave this book five stars. I know the book will be controversial. I know it is not for everyone. It will generate heaven only knows what kind of reaction once it hits bookstores, but I think it is an important examination, even if it is a work of fiction. It’s a portrayal we should welcome, as it proves many points women have been trying to stress for ages.

Crawling inside the mind of a predator is not easy- it’s not supposed to be. This book is not one you ‘enjoy’. It’s a book that should make one feel extremely uncomfortable, one that makes you squirm in your seat. It is supposed to have that type of deep effect on you. In fact, it took me a very long time to read this novel because I had to take frequent breaks from it.

Overall, this book is just downright chilling, and left me feeling shaken and very emotional. While it is not an easy novel, it is one I recommend reading, if you can. It is very thought-provoking, and I can see it bringing out some pretty intense discussions for book clubs.

Vanessa’s portrait is utterly heartbreaking. Her view of the situation- again, too common. She put everything on herself, and our society continues to enable that feeling of shame and guilt, and even goes so far as to threaten and warn off anyone who might think of doing otherwise. As others have pointed out, this book shows why recent movements like #MeToo, resonated with so many people and is another reason why I feel it is a worthy five -star book.

Shouldn’t need to even say it, but- if you have certain triggers this is NOT the book for you. I’ve written and re-written this review many times, and have toned down my frustrations, knowing my words might offend some. But, please, please, please- if you suspect a situation is not appropriate, under any circumstances, with your child, sibling, friend or colleague, don’t hesitate to listen, to hear them, to intervene or report your concerns to those who have the authority to do so- or encourage them to come forward or seek help. The details may be upsetting to hear, but your courage just might save someone you love from becoming another ‘Vanessa’. 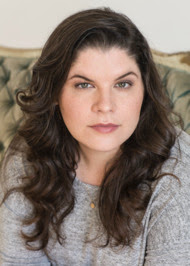 Kate Elizabeth Russell was born and raised in eastern Maine. She holds an MFA from Indiana University and a PhD from the University of Kansas. My Dark Vanessa is her debut novel.
Posted by gpangel at 1:00 AM