How far will you go to protect your family? Will you keep their secrets? Ignore their lies?

In a small town in Virginia, a group of people know each other because they’re part of a special treatment center, a hyperbaric chamber that may cure a range of conditions from infertility to autism. But then the chamber explodes, two people die, and it’s clear the explosion wasn’t an accident.

A showdown unfolds as the story moves across characters who are all maybe keeping secrets, hiding betrayals. Was it the careless mother of a patient? Was it the owners, hoping to cash in on a big insurance payment and send their to college? Could it have been a protester, trying to prove the treatment isn’t safe?

Miracle Creek by Angie Kim
My rating: 5 of 5 stars

Fantastic! Lived up to the hype

Everyone knows I love a good courtroom drama, so this book was highly recommended to me by some of my GRs peers. But, try as I might, the book just wasn’t calling out to me when it was first released. So, I waited for the right mood, and I think my instincts paid off this time.

In a small Virginia town, a Korean couple has set up a Hyperbaric chamber on their land, which draws  a group of eclectic people, all hoping to find relief from conditions ranging from autism to infertility. However, some people are adamantly opposed to this controversial treatment for children with autism, and have begun protesting.

Then, a tragic explosion leaves two people dead, and severely injures several others, leaving many lingering questions behind.

Was it an accident or was it deliberate? Was it one of the protestors or a member of the group participating in the chamber treatment?

As the investigation proceeds, the mother of an autistic boy is singled out as the prime suspect. Did she, with malice aforethought, set out to murder her own child? There is strong circumstantial evidence that she did, but as the trial begins, the situation leading up to the explosion is revealed, exposing a plethora of secrets, cover-ups, lies, and agonizing guilt, providing more than ample reasonable doubt in the reader's mind. Is the right person on trial?

The premise of this book is a bit unusual, at least in the beginning. I have heard of the hyperbaric chamber, or something like it, probably from some medical drama on television, but I didn’t know its official name or what all it was used for.

Apparently, it is used for numerous health issues ranging from anemia to vision loss, but is questionable when it comes to certain other conditions. Interesting. I learn something new every time I read a book!

The downside, of course, was the uptick in the number of characters I had to keep track of. Again, I found myself reading slower to make sure I was understanding everything that was going on. I listened to portions of this book on audio as well, and thought it was very well done considering the amount of characters involved.

It feels like I have been waiting for decades for a riveting courtroom drama. The well is so dry, I soaked this one up like a sponge! As popular as this book became, I hoped it would prompt a legal thriller comeback- just so long as it didn’t turn into a ‘trend’ or oversaturation. Doesn’t anyone know how to practice moderation?)

However, this story goes much deeper than the murder trial. It also takes a hard look at what it means to be a parent- the desire to shelter and protect our children and the strong urge to give them a better life and a brighter future, providing them with the best advantages possible. Yet, the moral sets, is equally important, as well as instilling a strong level of accountability, from both parent and child, building true character.

Parenting is difficult under the best of circumstances, but raising a child with special needs is an all- consuming effort, the challenges constant, and this novel provides some very examples of that, measuring the exhausting toll it can take on even the most resilient and dedicated parents.

Overall, this is a well-rounded novel that could just as easily have relied on one dimension of the story- the trialor the behind the scenes drama that revealed all those stunning secrets and resentments. To have adeptly combined the two aspects of the story, with balance, and near perfect pacing, is what really made this novel stand out.

Obviously, I am very impressed this debut novel. Can’t wait to see what Angie Kim comes up with next. 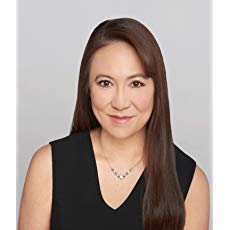 Angie Kim moved from Seoul, South Korea, to the suburbs of Baltimore as a preteen. She attended Stanford University and Harvard Law School, where she was an editor of the Harvard Law Review, then practiced as a trial lawyer at Williams & Connolly. Her stories have won the Glamour Essay Contest and the Wabash Prize for Fiction, and appeared in numerous publications, including The New York Times, Salon, Slate, The Southern Review, Sycamore Review, Asian American Literary Review, and PANK. She lives in Northern Virginia with her husband and three sons. MIRACLE CREEK is her first book. Visit her website at www.angiekimbooks.com
Posted by gpangel at 1:00 AM