FLASHBACK FRIDAY- After Her by Joyce Maynard- Feature and Review 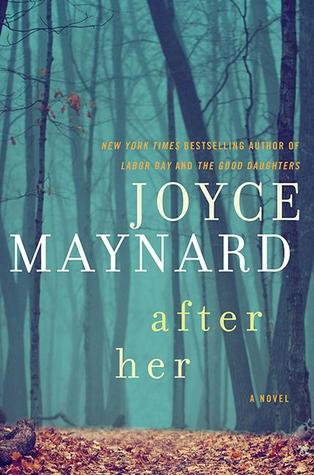 The New York Times bestselling author of Labor Day and The Good Daughters returns with a warm and haunting novel of sisterhood, adolescence, sacrifice, and suspense

It's the summer of 1979, and a dry, hot, northern California school vacation stretches ahead for Rachel and her younger sister Patty-the daughters of a larger-than-life, irresistibly handsome and chronically unfaithful detective father who loves to make women happy, and the mother whose heart he broke.

Left to their own devices, the inseparable sisters spend their days studying record jackets, concocting elaborate fantasies about the life of the mysterious neighbor who moves in down the street, and playing dangerous games on the mountain that rises up behind their house.

When young women start showing up dead on the mountain, the girls' father is charged with finding the man responsible, known as The Sunset Strangler. Seeing her father's life slowly unravel when he fails to stop the murders, Rachel embarks on her most dangerous game yet: setting herself up as bait to catch the killer, with consequences that will destroy her father's career and alter the lives of everyone she loves.

It is not until thirty years later that Rachel, who has never given up hope of vindicating her father, finally smokes out the killer, bringing her back to the territory of her childhood, and uncovering a long-buried family secret.

As with her novel Labor Day, Maynard's newest work is part thriller, part love story. Loosely inspired by the Trailside Killer case that in the late seventies, her tale delves deep into the alternately thrilling and terrifying landscape of a young girl's first of adult sexuality and the loss of innocence, the bond between sisters - and into a daughter's tender but with her father, and what it is to finally trust a man.

After Her by Joyce Maynard
My rating: 4 of 5 stars

After Her by Joyce Maynard is a 2013 William Morrow publication.

Rachel and Patty are on summer break and are pretty much left to fend for themselves, while their mother spends most of her time in her room with her library books. Because their mother can’t afford cable, they watch TV through the window of their neighbor’s house and make up the dialogue themselves, and spy on another one their neighbors, creating elaborate stories about him.

However, they also spend time playing on the mountain behind their house which also happened to be the possible hunting ground of The Sunset Strangler.

The girls, Rachel especially, has a bird’s eye view of the case that is dominating headlines, because their charismatic father is the lead detective on the case. With her father's face on , the popular kids invite Rachel into their circle, eager for exclusive information about the case.

However, as the case drags on, with no arrest, Rachel watches her father, a man with a weakness for women, but a larger than life hero to her, begin to slowly come apart, putting his health at risk, as his career and reputation go down the drain.

As the years pass, Rachel never gives up on vindicating her father, determined to discover the identity of The Sunset Strangler....

If someone were to ask me if I had read any books by Joyce Maynard I would have quickly answered in the affirmative. How is it possible I never one of her books, right? Yet, I have only listed two of her books here on Goodreads. If I have read her work previously, it was long before I was keeping track of such things. So- I’m going to count this book as part of my 2020 challenge to read authors I’ve never tried.

Why I chose this book over her other novels, I’m not sure. I think it popped up on Goodreads or at the library and was the first one I came to on my list. Whether or not this is her best work or a book she is well known for, I couldn’t say. But, either way, I am glad I picked this book and will certainly go back and read more books by this author.

Rachel’s first- person narrative is what brings this story to life. The author based the book on a true crime case, one similar to the events that transpire in the story, as the detective working the case had two daughters who firmly believe their father’s death was directly linked to his job.

The time frame is also of great importance and as I was reading about the games Rachel and Patty played together in 1979, I was reminded of television shows and trends of the time. I was also struck by how to roam and explore. Naturally, they put themselves in unnecessary danger and their whereabouts should have been monitored more closely.

On the other hand, living without cable, and without having every single hour of their day planned and structured, exercised their minds and bodies, and encouraged their imaginations, which no doubt, played a role in Rachel's eventual career path. Not only that, this book should come with a soundtrack! But this is just my rambling musings.

The book is a thriller, a mystery, a coming of age tale, and about father and daughter relationships. It’s a poignant and bittersweet story that might make you grab for a tissue before all is said and done, but it’s also one of many surprises, ending on an upbeat note that hints at long overdue peace and new beginnings.

Overall, this book is much more than a mystery-thriller- it's a well-rounded story with a little something for everyone. I’m very much looking forward to discovering more of Maynard’s work. 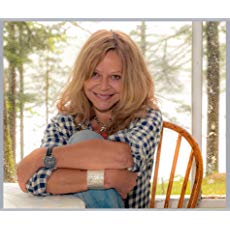 Maynard is the author of seventeen books, including the novel To Die For and the best-selling memoir, At Home in the World--translated into sixteen languages. Her novel, To Die For was adapted for the screen by Buck Henry for a film directed by Gus Van Sant in which Joyce can be seen in the role of Nicole Kidman's lawyer.. Her novel Labor Day was adapted and directed by Jason Reitman for a film starring Kate Winslet and Josh Brolin, to whom Joyce offered instruction for making the pie that appeared in a crucial scene in the film.
Posted by gpangel at 1:00 AM