Inheritance: A Memoir of Genealogy, Paternity, and Love by Dani Shapiro- Feature and Review 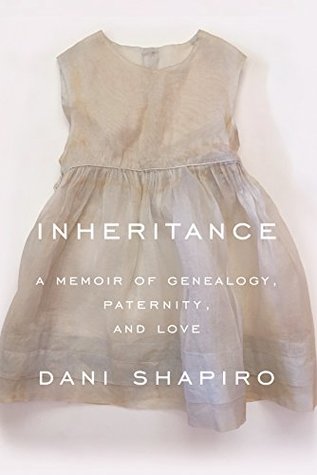 “A gripping genetic detective story, and a meditation on the meaning of parenthood and family.” —Jennifer Egan, author of Manhattan Beach

From the acclaimed, best-selling memoirist and novelist—“a writer of rare talent” (Cheryl Strayed—a memoir about the staggering family secret uncovered by a genealogy test: an exploration of the urgent ethical questions surrounding fertility treatments and DNA testing, and a profound inquiry of paternity, identity, and love.
What makes us who we are? What combination of memory, history, biology, experience, and that ineffable thing called the soul defines us?
In the spring of 2016, through a genealogy website to which she had whimsically submitted her DNA for analysis, Dani Shapiro received the stunning news that her father was not her biological father. She woke up one morning and her entire history--the life she had lived--crumbled beneath her.
Inheritance is a book about secrets--secrets within families, kept out of shame or self-; secrets we keep from one another in the name of love. It is the story of a woman's urgent quest to unlock the story of her own identity, a story that has been scrupulously hidden from her for more than fifty years, she had spent writing brilliantly, and compulsively, on themes of identity and family history. It is a book about the extraordinary moment we live in--a moment in which science and technology have not only medical also the capacities of the human heart to contend with the consequences of what we discover.

Inheritance: A Memoir of Genealogy, Paternity, and Love by Dani Shapiro
My rating: 4 of 5 stars

Inheritance: A Memoir of Genealogy, Paternity, and Love by Dani Shapiro is a 2019 Knopf publication.

A poignant journey to self-rediscovery!

The home DNA kit is so popular right now. I know many people who have purchased one and mostly it was a fun and fascinating exercise. However, there are many pros and cons that consumers often neglect to consider.

Pros- such as learning about a predisposition to certain diseases is beneficial information to have.

But, one of the cons is privacy. I think many consumers fail to realize their DNA information is being used in ways that are profitable to other people, and there are no real guidelines in place to keep one's information safe from third parties. Even the FDA backed off on their original concerns about revealing health information. Until more policies are in place I think I'll take a pass on the trend for now.

Another consequence, as many have discovered, is the exposure of a few family secrets along the way. Surprise! You have a half brother you didn't know about!

For Dani Shapiro, who only sent off for a DNA analysis on a whim, discovering that the man who raised her was not her biological father sent her reeling. This would be a shock to anyone, at any point in their lives, but for a mature woman who felt confident in her heritage- despite some skepticism from others close to her- it was an adjustment, she couldn't absorb easily.

Both of her parents were dead, but Dani did recall a startling conversation with her mother once, where her mother confessed that Dani had not been conceived in the usual manner.

From that memory, Dani pieces together a complex puzzle, which erases much of what she thought she knew about herself, while exposing the truth of her heritage, her genetic makeup and opening up the possibility for relationships with her biological family members she never would have known about otherwise.

This is a fascinating story and Dani’s voice is so compelling. I felt as though I was on this journey with her. Her confusion, hurt, and disconnect with everything she had known before is palpable, and emotional, but not disproportionately so. I thought Dani went through this process of rediscovery with grace and dignity.

There may still be lingering questions she will never have the answers to, but she has managed to find a balance between her past and her new normal. She's made peace with her parents, her biological father, and the various cultural, religious, and health implications she struggled with along the way.

This is a very engrossing and interesting book. I don’t think I’ve ever read a memoir quite like this one. I found Dani to be an engaging storyteller and I am thankful she shared such an intensely personal part of her life with us.

Dani Shapiro is the bestselling author of the memoirs Hourglass, Still Writing, Devotion, and Slow Motion, and five novels including Black & White and Family History. She lives with her family in Litchfield County, Connecticut. Her latest memoir, Inheritance, will be published by Knopf in January, 2019.