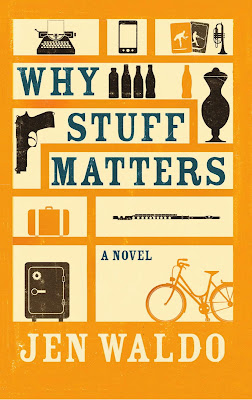 When Jessica, a grieving widow, inherits an antique mall from her also inherits the , an elderly, amoral, acquisitive, and paranoid collection.
When one of the vendors, a wily ex-con named Roxy, shoots her ex-husband, she calls Jessica to help bury the body and soon Jessica is embroiled in cover-ups, lies, and misdirection. Into this mix comes Lizzie, Jessica’s late husband’s twelve-year-old daughter by his first marriage, who’s been dumped on Jessica’s doorstep by the child’s self-absorbed mother and it soon becomes apparent that Lizzie is as obsessed with material possessions as Jessica’s elderly tenants.
Why Stuff Matters is a compelling ode to possession, why people like things and the curious lengths they will go to keep them. Returning to her fictional Caprock, Waldo turns her wry wit on the lives of those afraid to let go. 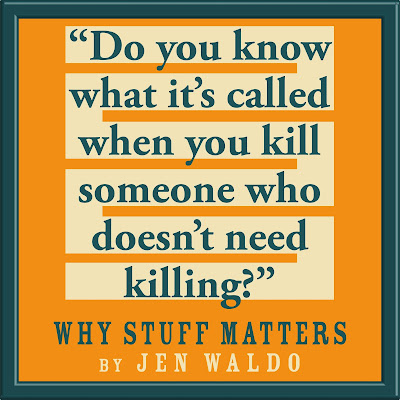 If I had to evacuate because of a fire, what three things would I save? Considering that my new novel, Why Stuff Matters, addresses a small community’s obsession with material possessions, this is a relevant question. Also, fires do occasionally sweep through this portion of Texas, so the possibility of this scenario coming true is a literal concern as well as a figurative one.
The first thing I’d grab would be my laptop, which goes with me every time I spend a night away from home. Over this one item, I’ll admit to . I write every morning. It is invariably what I do. Even if I were evacuated to some stale hotel while my home burned down, I’d write.
The next thing I’d take with me is woefully unoriginal. I’d take the photo albums. Not that I ever spend time browsing through them, but as a family we’ve had adventures. I think our sons would want me to rescue pictures of them as children riding camels, hiking through the Scottish highlands, scrambling around the ruins of Petra, or strolling through the tulips at Keukenhof.
Lastly, I’d dump the little dishes that hold my jewelry into my leather jewelry box that’s meant for traveling. Necklaces, earrings, rings—the usual stuff, but it’s nice stuff and I wouldn’t want to lose it.
Now keep in mind that for us, a fire might become a reality. We live amongst a lot of splintery cedar trees and undergrowth, and when there’s been no rain for a couple of months, the area becomes frighteningly dry. But there would . An evacuation notice would be given; we’d have ample time to gather some clothes, pack up, and get out.
It’s not like my husband and I haven’t discussed the likelihood and made a plan. The first thing in the truck will be the laptop. Then, while I gather the photo albums and jewelry, David would be freeing the art from the walls. We’ve collected some nice oils and batiks over the years, and each piece holds a memory—where we got it, how we haggled to get the price down, the endless discussion of where we’d hang it. In many cases, we know the artist.
After all this stuff is in the truck, we’d walk through and see what else we could save—probably a few small pieces of furniture. Together, we’d lift and carry the rosewood chest that reigns from the end of the hallway, purchased in Sorrento. And another chest; we bought it in Vietnam when we lived in Singapore and ended up paying the price again in duty to get it into the country. Live and learn. We’d slide both of these chests into the bed of the truck.
And that’s it. That’s all the truck will hold.
While I’ve written about the items I hold most dear, I’m also aware that it’s just stuff. However, having said that, a few months ago David and I loaded up the truck and went on a road trip. Four hours into it, we stopped for lunch. I walked around the back of the truck and saw that we’d driven that whole way with the tailgate open. Our luggage and David’s golf clubs were still there, but we lost a box of items that I’d put in at the last minute. The box held two new beach towels, laundry detergent, sunscreen, a bottle of Goose, and two bottles of a really nice Malbec. I didn’t spare a thought about how this box, falling on the highway, could have caused an accident. I was upset over the loss of the stuff. I felt befuddled and incomplete until every one of those items had been replaced. It seems I have more in common with the acquisitive folk in Why Stuff Matters than I thought. 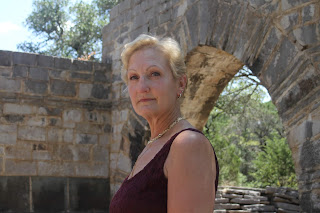 Waldo lived in seven countries over a thirty-year period and has now settled, along with her husband, in Marble Falls, Texas. She first started writing over twenty years ago when, while living in Cairo, she had difficulty locating reading material and realized she’d have to make her own fun. She has since earned an MFA and written a number of novels. Her work has been published in The European and was shortlisted in a competition by Traveler magazine. Old Buildings in North Texas and Why Stuff Matters have been published in the UK by Arcadia Books. Jen’s fiction is set in Northwest Texas and she’s grateful to her hometown of Amarillo for providing colorful characters and a background of relentless whistling wind.