Out of the Dark by Gregg Hurwitz- Feature and Review 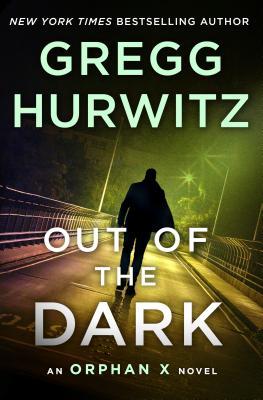 When darkness closes in―he's your last, best hope. Evan Smoak returns in Gregg Hurwitz’s #1 international bestselling Orphan X series.
Taken from a group home at age twelve, Evan Smoak was raised and trained as part of the Orphan Program, an off-the-books operation designed to create deniable intelligence assets―e. . Evan was Orphan X. He broke with the Program, using everything he learned to disappear and reinvent himself as the Nowhere Man, a man who helps the truly desperate when no one else can. But now Evan's past in the Orphan Program is reaching out to him.
Someone at the very highest level of government has been trying to eliminate every trace of the Orphan Program by killing all the remaining Orphans and their trainers. After Evan's mentor and the only father he ever knew was killed, he decided to strike back. His target is the man who started the program and who is now the most heavily guarded person in the world: the President of the United States.
But President Bennett knows that Orphan X is after him and, using weapons of his own, he's decided to counter-attack. Bennett activates the one man who has the skills and experience to track down and take out Orphan X―the first recruit of the program, Orphan A.
With Evan all his skills, resources, and intelligence to find a way through the layers of security that surround the President, suddenly he also has to protect himself against the deadliest of opponents. It's Orphan vs. Orphan with the future of the country―even the world―on the line.

Out of the Dark by Gregg Hurwitz
My rating: 5 of 5 stars

Out of the Dark by Gregg Hurwitz is a 2019 Minotaur Books publication.

Although my taste in thrillers usually leans towards different styles and directions, this series grabbed my attention right away and has quickly become one of my favorites.

This fourth installment opens with Evan Smoake-AKA "Orphan X”, plotting the assassination of the president of the United States- for good reason. It’s a kill or be killed kind of situation.

Unfortunately, for Evan, the president has a new girl on his team named, Naomi, and she’s giving Evan a good run for his money.

Meanwhile, a young man on the autism spectrum dials into the infamous ‘Nowhere Man’ hotline, just as Evan is battling his most formidable opponent to date.

So, fasten your seatbelts folks and prepare for an orphan against orphan showdown that will leave you holding on for dear life!

The Orphan X series may be long on action, but the story doesn’t depend on it or hide behind it. This is a stylish series, smart, and expertly plotted, with a nice emotional depth blended in to ensure our attachment to Evan and other recurring characters, as well.

I’m especially impressed with the way Hurwitz manages to create a dual storyline, both of which are suspenseful and urgent, amid all the chaos. While the ‘Nowhere Man’ threads are often secondary to the main plot, they are always compelling, and I love meeting the new characters and circumstances introduced in each chapter of the series. I also like the psychology behind the concept and the way good deeds are paid forward. The story featured in this chapter was especially poignant, giving Evan a chance to practice his humanity skills.

Because this is not the type of thriller I'm normally drawn to, I was afraid it could quickly and easily flame out.

However, so far, each installment has been equally riveting – but, I must say, this one just might be my favorite book in the series to date. 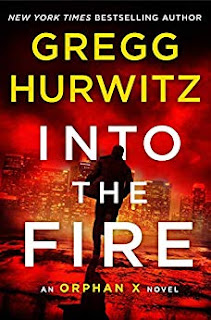 ABOUT THE AUTHORThe New York Times bestselling Orphan X returns - just when Evan Smoak thinks he's done, his deadliest job yet pulls him back Into The Fire...

Evan Smoak lives by his own code.
Once he was known as Orphan X. Trained as an off-the- assassin and spoken about only in whispers, Evan Smoak was one of the most talented – and most feared – men in the Program. But he broke free and reinvented himself as The Nowhere Man, a figure shrouded in mystery, known for helping the truly desperate.
If anyone is truly desperate, it’s Max Merriweather.
Max is at the end of his rope. His cousin has been brutally murdered, leaving Max an envelope that contains nothing but a mysterious key. However, someone really wants that key, badly enough that Max – and anyone he turns to – is in deadly danger. What seems like a simple job for The Nowhere Man turns out to be anything but. Behind every threat he takes out, a deadlier one emerges and Evan Smoak must put himself in greater danger than ever before as he heads once more Into The Fire. 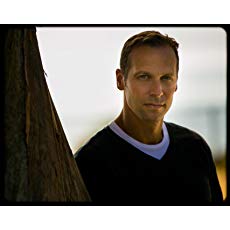 GREGG HURWITZ is the New York Times #1 internationally bestselling author of twenty thrillers, including OUT OF THE DARK (January 2019). His novels have won numerous literary awards and have been published in thirty languages. Additionally, he's written screenplays and television scripts for many of the major studios and networks. Gregg lives with his two Rhodesian in Los Angeles, where he continues to play soccer, frequently injuring himself.