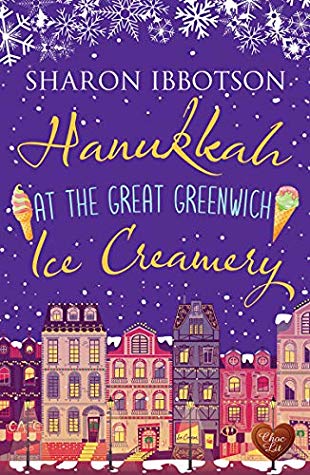 Hanukkah days, Christmas nights and strawberry ice cream
is a man who could do with a little bit of sweetening up. It’s no surprise that when he walks into The Great Greenwich Ice Creamery on a typically gloomy London day before Christmas, he insists on a black coffee rather than his childhood – strawberry ice cream.
But then he meets River Luca, the woman behind the . After their first encounter, Cohen begins visiting the ice creamery every Tuesday, gradually learning more about the intriguing River. Could her cynical Cohen to become the man who embraces Christmas, Hanukkah and even strawberry ice cream?

Hanukkah at the Great Greenwich Ice Creamery by Sharon Ibbotson
My rating: 5 of 5 stars

Hanukkah at the Great Greenwich Ice Creamery by Sharon Ibbotson is a 2019 Choc Lit publication.

World weary grudgingly weathers the London gloom to run an errand for his mother. His mission takes him to a Greenwich ice creamery where he comes face to face with River De Luca-the daughter of his mother’s best friend, who is definitely off limits. His world tilts on its axis, causing him to pause and take stock of his life.

River’s life couldn’t have been more different from Cohen’s. She is deaf, abandoned by her birth parents, and hasn’t had the best luck in the romance department. How could Cohen, the wealthy man with a hardened heart the right guy for her?

I loved this story!!

The atmosphere of the story immediately drew me in, and suddenly I could see the dreary London scenery and the charming brightness of the ice creamery by contrast. I knew this story would be good, and I was not disappointed.

The diversity and mingling of different religious celebrations are also a big draw. Cohen’s mother is Jewish, so she celebrates Hanukkah, and her faith has a big role in the story, as does her relationship with her son.

The challenges the deaf or hearing- impaired face is gently approached, with great respect, and is also an integral part of the romance.

The book is short, so things progress rapidly, but the relationships are fleshed out, and character growth, along with true love, develops beautifully. The story has its moments of poignancy, and can be emotive, but the tone has a fantastical quality to it, as well, making it feel positively magical!

Overall, this is simply a delightful story from start to finish!! 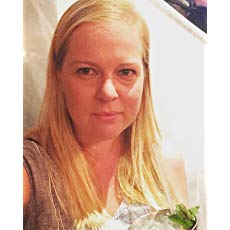 Sharon Ibbotson was born in Sydney, Australia, to British parents and lived there until her sixteenth birthday, at which point she was schooled in the U.K. She started writing from an early age, including a long-foray into 'Buffy the Vampire Slayer' , and was a Sydney Morning Herald Young Writer of the Year in 1997.
Her first novel, 'The Marked Lord' was published by Lit in January 2019, followed soon after by 'A Game of Desire' in June of the same year.
By day she be found parenting her two small children and two (even smaller) cats, while by night she writes, often into the early hours.
Sharon currently lives in London, the U.K, with her husband, son and daughter.
Posted by gpangel at 1:00 AM