FLASHBACK FRIDAY: Everything I Never Told You by Celeste Ng- Feature and Review 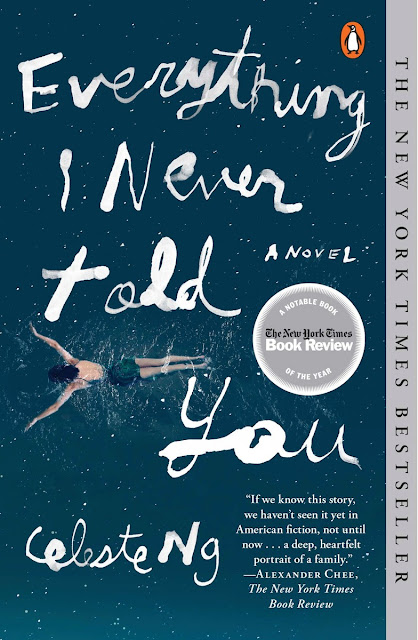 Lydia is dead. But they don’t know this yet . . So begins this debut novel about a mixed-race family living in 1970s Ohio and the tragedy that will either be their undoing or their salvation. Lydia is the favorite child of Marilyn and James Lee; their middle daughter, a girl who inherited her mother’s bright blue eyes and her father’s jet-black hair. Her parents are determined that Lydia will fulfill the dreams they were unable to pursue—in Marilyn’s case that her daughter become a doctor rather than a homemaker, in James’s case that Lydia be popular at school, a girl with a busy social life and the center of every party.

When Lydia’s body is found in the local lake, the delicate balancing act that has been keeping the Lee family together tumbles into chaos, forcing them to confront the long-kept secrets that have been slowly pulling them apart.

Everything I Never Told You by Celeste Ng
My rating: 5 of 5 stars

Everything I Never Told You by Celeste Ng is a 2015 Penguin Books publication.

As I began this book, my mind was a clean slate, with absolutely no preconceived ideas about it, so I was really surprised by it, and stunned by my emotional response to it. Once I started it, I literally did not move from the couch until I had turned the last page.

One of the main topics addressed here is the interracial marriage between a white woman, Marilyn, and an American Chinese man, James, who marry in the late 1950's, at a time when such an occurrence was very rare.

While this is a huge theme in the story and it is referred to often, I also picked up on the unhappiness I am sure many women like Marilyn felt in this time frame. Marilyn was smart, very smart, and wanted to be a doctor, (not a nurse), in a time when this too was very rare. Determined to have her cake and eat it to, she married the man she was in love with and started a family, but her career never materialized as planned. Marilyn eventually accepts her dream is never going to come to fruition and so it is her oldest daughter, Lydia, who must make up for this failing.

So, when Lydia disappears, her parents are absolutely destroyed, and long buried feelings of resentment bubble to the surface and expose the cracks in this seemingly well adjusted and happy family.

This story is sad, emotional, but utterly absorbing, and beautifully written. My heart went out to all the characters in the book, some of whom I felt more keenly for than others, but I still wanted them to come out intact, even if they will never be completely whole again. The Lee's will soldier on, believing in second chances, and learning from their past mistakes, will do right by those still living, and in doing so, will honor the memory of Lydia. This is a very thought provoking and compelling read, a cautionary tale, ending with a message of hope and the promise of better days to come.

GET YOUR COPY HERE:
https://www.amazon.com/Everything-Never-Told-You-Awards-ebook/dp/B00G3L7V0C/ 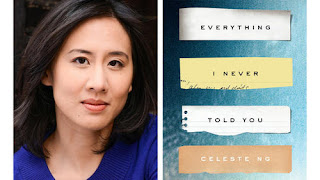 Celeste Ng is the author of the novel Everything I Never Told You  (Penguin Press), which was a New York Times bestseller, a New York Times Notable Book, and Amazon's #1 Best Book of the Year 2014. She grew up in Pittsburgh, Pennsylvania, and Shaker Heights, Ohio, in a family of scientists. Celeste attended Harvard University and earned an MFA from the University of Michigan (now the Helen Zell Writers’ Program at the University of Michigan), where she won the Hopwood Award.  Her fiction and essays have appeared in One Story, TriQuarterly, Bellevue Literary Review, the Kenyon Review Online, and elsewhere, and she is a recipient of the Pushcart Prize.
Currently, she lives in Cambridge, Massachusetts.