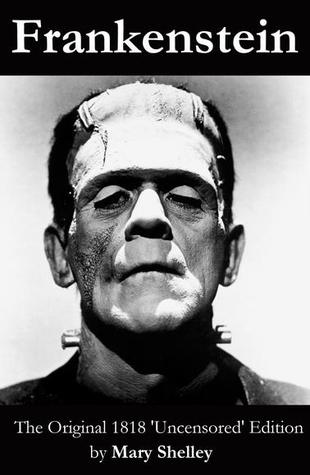 Frankenstein; or, The Modern Prometheus is the original 1818 'Uncensored' Edition of Frankenstein as first published anonymously in 1818. This original version is much more true to the spirit of the author's original intentions than the heavily revised 1831 edition, edited by Shelley, in part, because of pressure to make the story more conservative. Many scholars prefer the 1818 text to the more common 1831 edition.

Frankenstein by Mary Wollstonecraft Shelley
My rating: 4 of 5 stars

Frankenstein by Mary Wollstonecraft Shelley is an 1818 publication. This book is a 2013 e- publication)

I thought that I had read this book at some point during my early teens- maybe in junior high? Even so, I couldn’t remember anything about the book and knew that if I ever re-read it, it would be like reading it for the first time. Every year I consider reading Frankenstein for Halloween, but it never seemed to make the cut- until now.

Once I finally settled into reading the book it became immediately apparent that the book was completely unfamiliar to me. I’m still not sure If I ever truly read this book all the way through, and I’m waffling on how clear my memory is on that- but- I did finally take notice of the blurb/synopsis for this edition of Frankenstein, which clearly states that this book is the original 'uncensored' 1818 version, the one submitted by an ‘anonymous’ author as Frankenstein: The Modern Prometheus. According to the blurb, Shelley heavily edited the book in 1831, under pressure to make it more conservative.

So, even if you have read this book once before, this original version may be worth your time. If you have only seen the countless films based on the book, you really should read the book for a greater understanding of Shelley’s true intent when writing the book.

The novel is controversial for its time, and I think it still gives one a lot to ponder over. It is a Horror novel, but maybe not in the way you have been conditioned to think of it. The story is also told by the narrators, (Walton, Frankenstein and the Monster), with the benefit of hindsight, giving them the ability to see their errors and the consequences they wrought.

Several weighty themes are addressed in the story and people have theorized and analyzed the symbolism and pontificated on these subjects, searching for all manner of possible allegory, for ages.

In this case, the subtitle Shelley gives the book, suggests a parallel with the Greek mythological figure- Prometheus the Titan- who created humanity with clay. The quote by The monster to his creator- “Remember, that I am monster; I ought to be thy Adam, but I am rather the fallen angel, whom thou drivest from joy for no misdeed" seems to be a reference to the creation depicted in Genesis.

The scientific ramifications suggest a cautionary tone-perhaps bordering on alarmist territory, in my opinion, but certainly raises questions- ones that are still being considered today.
John Milton’s- Paradise Lost’ is also thought to have influenced Shelley as the theme of alienation and isolation are prominent throughout the book.

For me, the motives behind Frankenstein’s experimentation, which, despite some arguments suggesting his grief played a role in his decision, were in my opinion, wholly egotistical and arrogant, spurred on by his raw and naked ambition. He attempts to sway the reader, at once claiming he is the devil, while at the same time, rationalizing his actions. His work backfires spectacularly, when his creation turns out to be so ‘hideous’, he is unable to acclimate himself within a normal society. He is abandoned by his creator, which leads to intense bitterness and anger, leading to his demand for a mate.

The conclusion felt a little bit abrupt, maybe a bit vague. Unlike Frankenstein, Walton’s choice is one that considers the overall effect of his ambitions- but, does the monster follow through on his promise?

Looking at the various points lined out here hard to find too many similarities between the book and the various movie adaptations. The revised version of the book is the most commonly read, but still I hardly recognize the story compared to Hollywood’s interpretation of it.

As for the writing- compared to what we are accustomed to today, the prose may take some getting used to, but I had no trouble with it. As to whether the book stands the test of time is perhaps debatable. I couldn’t help but notice many recent three- star ratings for the book compared with tons of five- star ratings from years past.

I think this book has more merit than it is given credit for, and still raises many valid questions. Today’s world is full of Victor Frankenstein prototypes- ambitious to the point of obsession, and the consequences of personal achievement be damned- and they never seem to fully learn from their mistakes either.

For a book synonymous with the horror genre for centuries, I’d say it does stand the test of time. It is much more thought provoking than I had anticipated, and even if I had read this book from start to finish in my youth, I no doubt missed out on the various messages implied throughout. All of that would have sailed right over my head as I’m sure my only goal was to read a scary story.
I’m glad Frankenstein finally made it to the top of my Halloween reading list. Someday I may read the edited edition, and compare notes, but I doubt I’ll ever be tempted to watch a movie version again, with the possible exception, of Young Frankenstein. 😁😁 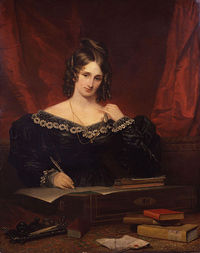 Mary Shelley (née Mary Wollstonecraft Godwin, often known as Mary Wollstonecraft Shelley) was a British novelist, short story writer, dramatist, essayist, biographer, travel writer, and editor of the works of her husband, Romantic poet and philosopher Percy Bysshe Shelley. She was the daughter of the political philosopher William Godwin and the writer, philosopher, and feminist Mary Wollstonecraft.Mary Shelley was taken seriously as a writer in her own lifetime, though reviewers often missed the political edge to her novels. After her death, however, she was chiefly remembered only as the wife of Percy Bysshe Shelley and as the author of Frankenstein. It was not until 1989, when Emily Sunstein published her prizewinning biography Mary Shelley: Romance and Reality, that a full-length scholarly biography analyzing all of Shelley's letters, journals, and works within their historical context was published.The well-meaning attempts of Mary Shelley's son and daughter-in-law to "Victorianise" her memory through the censoring of letters and biographical material contributed to a perception of Mary Shelley as a more conventional, less reformist figure than her works suggest. Her own timid omissions from Percy Shelley's works and her quiet avoidance of public controversy in the later years of her life added to this impression.The eclipse of Mary Shelley's reputation as a novelist and biographer meant that, until the last thirty years, most of her remained out of print, obstructing a larger view of her achievement. She was seen as a one-novel author, if that. In recent decades, however, the republication of almost all her writings has stimulated a new recognition of its value. Her voracious reading habits and intensive study, revealed in her journals and letters and reflected in her works, is now better appreciated. Shelley's recognition of herself as an author has also been recognized; after Percy's death, she wrote about her ambitions: "I think that I can maintain myself, and there is something inspiriting in the idea". Scholars now consider Mary Shelley to be a major Romantic figure, significant for her literary achievement and her political voice as a woman and a liberal.