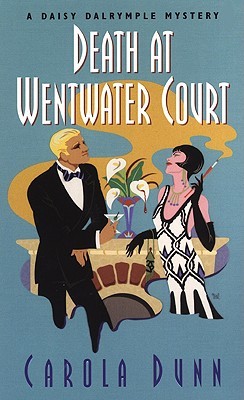 This first installment of a cozy mystery series transports readers back to the bygone era of 1923 Britain, where unflappable flapper and fledgling journalist Daisy Dalrymple daringly embarks on her first writing assignment—and promptly stumbles across a corpse.

No stranger to sprawling country estates, wealthy Daisy Dalrymple is breaking new ground in having scandalously traded silver spoon for pen and camera to cover a story for Town and Country magazine. But planned interviews with the inhabitants of Wentwater Court give way to interrogation after suave Lord Stephen Astwick meets a dire fate on the tranquil skating pond. Armed with evidence that his fate was anything but accidental, Daisy joins forces with Scotland Yard to examine an esteemed collection of suspects and to see that the unlikely culprit doesn’t slip through their fingers just as the unfortunate Astwick slipped through the ice.

Death at Wentwater Court by Carola Dunn
My rating: 4 of 5 stars

Murder at Wentworth Court by Carola Dunn is a 2006 Kensington publication. Originally published in 1994)

A genuine whodunit set back in the 1920s!

When Daisy Dalrymple, a photographer and journalist arrives at Wentworth Court to work on a feature article about the historical home, she soon finds herself embroiled in a host of family dramas, while trying to discourage a rather ardent admirer.

But, when another guest is found dead, the apparent victim of an ice -skating mishap, Daisy suspects foul play. After Daisy alerts Alec Fletcher of her suspicions, the pair team up, making an unlikely but very effective detective team. But, can they draw out a potential murderer and discover their motive?

Believe it or not, I have never read a book by Carola Dunn. It's not that I was unaware of her, but somehow, I just never got around to reading any of her work. My library and Hoopla have been prominently displaying her mystery novels recently, and even have them in audio- which I’ll have to try with the next book in the series. When I realized this series was set during the 1920s, despite my solemn vow not to start another series, I couldn’t resist, especially since the books aren’t very long.

I loved, loved, loved all the 1920s vernacular, and Daisy is definitely a woman ahead of her time. The mystery is very well done, with a ‘golden age’ atmosphere to it. A house full of possible suspects, the process of elimination, and then the big surprise reveal- which turned out to be a total surprise. It’s a formula that’s been used countless times, but, if it is done right, it always seems to work.

Overall, the mystery is light, clean, fun, and pretty much what I expected it to be. I’m glad I caved and added yet another series to my TBR pile. It’s fun to slip into a ‘’ style mystery with familiar characters from time to time. So, I’m going to stop worrying about how many series I start or how long it takes to finish them. I’m having fun discovering new series and old ones too, and enjoy all of them- and that’s all that matters, right?

I think I’m going to like Daisy Dalrymple a lot and can’t wait to see what she gets up to next. 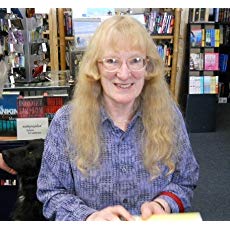 Carola Dunn is the author of the Daisy Dalrymple Mysteries, the Cornish Mysteries, and over 30 Regencies. Born and raised in England, the author now lives with her dog in Eugene, Oregon, USA.