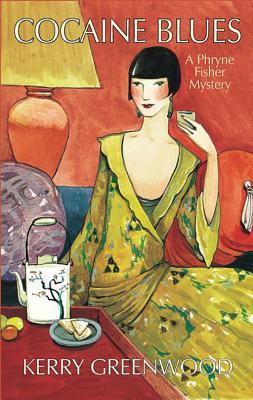 The London season is in full fling at the end of the 1920s, but the Honorable Phryne Fisher—she of the gray-green eyes and garters—is tiring of polite conversations with retired colonels and dances with weak-chinned men. When the opportunity presents itself, Phryne decides it might be amusing to try her hand at becoming a lady detective in Australia. Immediately upon settling into Melbourne's Hotel Windsor, Phryne finds herself embroiled in . From poisoned wives and cocaine smuggling and rampant communism—not to mention erotic encounters with the beautiful Russian dancer, Sasha Lisse—Cocaine Blues charts a crescendo of steamy intrigue, culminating in the Turkish baths of Little Lonsdale Street.

Cocaine Blues by Kerry Greenwood
My rating: 4 of 5 stars

This is the first in the Phryne Fisher series written by Kerry Greenwood and published by Poisoned Pen.

Phryne is a wealthy heiress with a talent for solving crimes. Bored with polite English society, Phryne heads to Australia to see about a woman that could be a poisoning victim. Phryne plans to stay in Australia and start her own private detective business.

This first case Phryne is chasing after a hack abortionist, a cocaine ring and of course,  trying to find out if her friend's daughter is being poisoned.

Set during the 1920's, the sharp dialogue, excellent descriptions, and a fast moving story with a shocking outcome left me wishing for more.

is quite modern, non conformist, witty, sharp and very likeable. The secondary characters are equally charming. This series has been going on for a while, with I think about eighteen books, at this time. But, nearly all of them are under three hundred pages, so it wouldn't take long to catch up, which I intend to do.

Very impressed with this one. 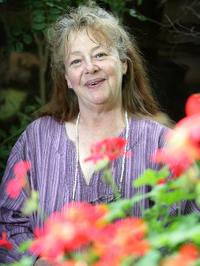 The Phryne Fisher series (pronounced Fry-knee, to rhyme with briny) began in 1989 with Cocaine Blues which was a great success. Kerry has written thirteen books in this series with no sign yet of Miss Fisher hanging up her pearl-handled pistol. Kerry says that as long as people want to read them, she can keep writing them.
Kerry Greenwood has worked as a folk singer, factory hand, director, producer, translator, costume-maker, cook and is currently a solicitor. When she is not writing, she works as a locum solicitor for the Victorian Legal Aid. She is also the unpaid curator of seven thousand books, three cats (Attila, Belladonna and Ashe) and a computer called Apple (which squeaks). She embroiders very cannot knit. She has flown planes and leapt out of them (with a parachute) in an attempt to cure her fear of heights (she is now terrified of jumping out of planes but can climb ladders without fear). She can detect second-hand bookshops from blocks away and is often found within them.
For fun Kerry reads science fiction/fantasy and detective stories. She is not married, has no children and lives with a registered wizard. When she is not doing any of the above she stares blankly out of the window.
Posted by gpangel at 1:00 AM