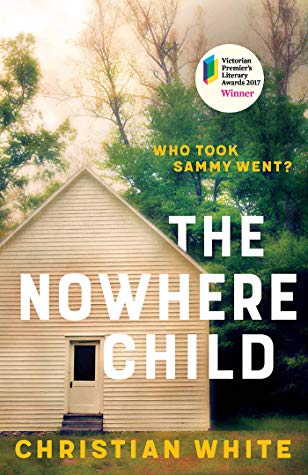 Winner of the Victorian Premier’s Literary Award, The Nowhere Child is screenwriter Christian White’s internationally bestselling debut thriller of psychological suspense about a woman uncovering devastating secrets about her family—and her very identity…
Kimberly Leamy is a photography teacher in Melbourne, Australia. Twenty-six years earlier, Sammy Went, a two-year old girl vanished from her home in Manson, Kentucky. An American accountant who contacts Kim is convinced she was that child, kidnapped just after her birthday. She cannot believe the woman who raised her, a loving social worker who died of cancer four years ago, crossed international lines to steal a toddler.
On April 3rd, 1990, Jack and Molly Went’s daughter Sammy disappeared from the inside their Kentucky home. Already estranged since the girl’s birth, the couple drifted further apart as time passed. Jack did his best to raise and protect his other daughter and son while Molly found solace in her faith. The Church of the Light Within, a Pentecostal fundamentalist group who handle poisonous snakes as part of their worship, provided that faith. Without Sammy, the Wents eventually fell apart.
Now, with proof that she and Sammy in fact the same person, Kim travels to America to reunite with a family she never knew she had. And to solve the mystery of her abduction—a mystery that will take her deep into the dark heart of religious fanaticism where she must fight for her life against those determined to save her soul…

The Nowhere Child by Christian White
My rating: 4 of 5 stars

The Nowhere Child by Christian White is a 2019 Minotaur Books publication.

An unconventional spin on the child kidnapping thriller-

When Kimberly Leamy, a photographer living in Melbourne, Australia is approached by a total stranger claiming she is Sammy Went, the toddler who disappeared twenty-six years ago in Manson, Kentucky, she is highly skeptical. However, she still feels compelled to look through a few old family photos, where, to her dismay, she discovers her baby pictures bear a striking resemblance to Sammy Went. She is then shocked by her stepfather, Dean’s admission that Kim’s mother had secrets she took her grave, secrets he swore never to reveal.

Needing to discover the truth, Kim travels to Kentucky to meet with the family of Sammy Went, where one stunning revelation, or event, after another, leaves her head spinning. Is she really Sammy? Who was the woman who raised her and why did she kidnap Sammy? As Kim searches for answers about her true identity, she stirs up a den of snakes- quite literally-

As I have stated many times, the missing child ‘trope’ is one that has been written many times over, but for some reason, it is always a theme I find absorbing and compelling. I try to imagine what it must be like to live one’s life in that type of limbo, never knowing for sure what happened to your child.

In some novels, centered around kidnappings, a person will come forward claiming they are a long- lost kidnap victim, and sometimes the victim is found years and years later, living under an assumed identity. However, the story usually ends on what is presumed to be a happy ending, with the family reunited and finally receiving long overdue closure.

However, in this case, the story is centered around Kim, the alleged victim, as she copes with the shock of discovering her entire life, up to this point has been a lie. She has another family, in another country. Not only that, Sammy’s disappearance revealed a few shocking family secrets, changing the dynamics of the Went family forever.

While all of this sounds like a heavy family drama, there is a strong undercurrent of suspense, as the specifics of Sammy’s disappearance remain shadowy, with several viable suspects still at large. It would seem everyone involved has a secret, or a hidden resentment, or are under the influence of a strange religious order, one which practices dangerous rituals, including snake handling. It is impossible for Kim/ Sammy to let her guard down, to trust anyone, until the bitter end, when the shocking truth is finally revealed.

Once more the kidnapped child theme held me captive, unable to wrap my head around Sammy’s family dynamic, marveling at Kim’s ability to absorb the unreal circumstances and revelations thrown at her at breakneck speed. The author did a great job of building the suspense at just the right pace and keeping the reader off balance.

This is a unique story, featuring quirky, eccentric characters, and a few truly shivery moments that may make some readers uncomfortable, especially if you have a thing about snakes. I had a few mixed feelings about the way things wrapped up, but overall, I found this to be a very satisfying thriller!

Christian White is an Australian author and screenwriter. His debut novel, The Nowhere Child, won the Victorian Premier’s Literary Award for an Unpublished Manuscript. He co-created the television series Carnivores, currently in development with Matchbox Pictures and Heyday TV, and co-wrote Relic, a psychological horror feature film to be produced by Carver Films (The Snowtown Murders, Partisan).
Born and raised on the Mornington Peninsula, Christian had an eclectic range of ‘day jobs’ before he was able to write full-time, including food-cart driver on a golf course and video editor for an adult film company. He now spends his days writing from his home in Melbourne where he lives with his wife, the filmmaker Summer DeRoche, and their adopted greyhound, Issy. He has a passion for true crime podcasts, Stephen King and anything with Bigfoot. The Nowhere Child is his first book. Christian’s currently working on his second novel, due for publication by Affirm Press in 2019.