Who Slays the Wicked by C.S. Harris- Feature and Review 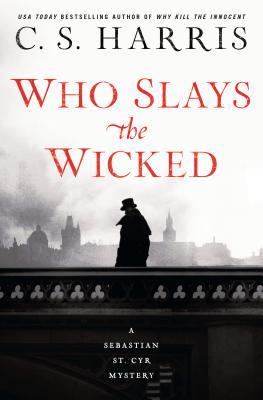 The death of a fiendish nobleman close to home as Sebastian St. Cyr is tasked with finding the killer to save his young cousin from persecution in this riveting new historical mystery from the USA Today bestselling author of Why Kill the Innocent....
When the dissolute young Ashworth is found brutally murdered, Sebastian St. Cyr, Viscount Devlin, is called in by Bow Street magistrate Sir Henry Lovejoy to help catch the killer. Just seven months before, Sebastian had suspected Ashworth of aiding one of his longtime friends and companions in the kidnapping and murder of a string of vulnerable street children. But Sebastian was never able to prove Ashworth's complicity. Nor was he able to prevent his troubled, headstrong young niece Stephanie from entering into a disastrous marriage with the dangerous nobleman.
Stephanie has survived the difficult birth of twin sons. But Sebastian soon discovers that her marriage has quickly degenerated into a sham. Ashworth abandoned his pregnant bride at his father's Park Street mansion and has continued living an essentially bachelor existence. And mounting evidence--ranging from a small bloody handprint to a woman's silk stocking--suggests that Ashworth's killer was a woman. Sebastian is tasked with unraveling the shocking nest of secrets surrounding Ashworth's life to keep Stephanie from being punished for his death.

Who Slays the Wicked by C.S. Harris
My rating: 4 of 5 stars

Who Slays the Wicked by C. S. Harris is a 2019 Berkley publication.

Well, naturally, I didn’t shed any tears over Ashworth’s demise. Good riddance, if you ask me. But the evidence tends to point to Sebastian’s niece, a development that made me as nervous as it did Sebastian.

It then becomes of utmost importance to keep suspicion away from Stephanie, if at all possible, in hopes of finding another viable suspect- of which there are plenty. However, more political intrigue develops when the Russian Grand Duchess arrives in London several months ahead of schedule.

Meanwhile, Hero is doing research on the poorest people of London, which has her interviewing rag and bone pickers and night soil men. Also, Hero finally begins to connect the dots when it comes to her dear, clever and conniving cousin, when a few more interesting details emerge. I can't wait for this thread to develop further!!

As always, there is a lot going on in this latest chapter in the series. As desperately as Sebastian hopes his niece is not guilty, he remains mostly unbiased, occasionally over compensating, following the clues, making calm, yet worrying deductions. He also had to put up with the Russian connection, which quickly becomes more of a personal concern, as Sebastian's inquires are not exactly welcome.

It is hard to find fault in this book anywhere, especially the way Harris weaves the intricate details of this enthralling mystery. But, as a long- time reader of the series, I was a bit disappointed in the chemistry between Hero and Sebastian- and Hero’s reduced role. I, also, at this point in the series, really wouldn’t miss Kat all that much, if Sebastian left off visiting her for a while. Her role in this installment felt more like a contrivance or token appearance anyway.

That said, Hero’s research is eye-opening. As a history lover, I have read about the extremely distasteful occupations the poor acclimated themselves to and the lengths they would go just to survive, but Hero’s research humanizes the poverty- which is extreme, and hard to imagine. These segments may make a few readers feel a bit squeamish- and grateful for modern plumbing.
(Although it is worth noting that Rag & Bone men made a resurgence in the 2000’s due to the cost of scrap metal.)

Overall, this was another incredibly tense and deeply engrossing installment in one of my very favorite series!!

GET YOUR COPY HERE:
https://www.amazon.com/Slays-Wicked-Sebastian-Mystery-Book-ebook/dp/B07FC1KCFT/ 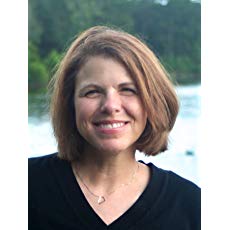 An Air Force brat who grew up exploring castles in Spain and fishing in the mountains of Oregon and Idaho, Candy later worked as an archaeologist and earned a PhD in European history. She now writes the Sebastian St. Cyr historical mystery series as C.S. Harris and under her own name, Candice Proctor. Married to retired Army Colonel Steve Harris, she lives in New Orleans. Visit her website at www.csharris.net.
Posted by gpangel at 1:00 AM