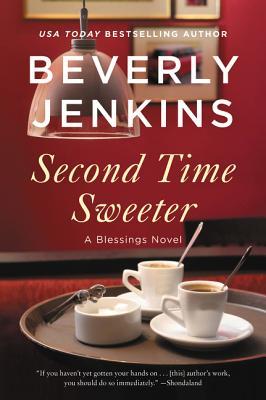 NAACP nominee and USA Today bestselling author Beverly Jenkins continues her beloved Blessings series with a new heartwarming novel set in Henry Adams, Kansas.
Malachi “Mal” July has run into trouble in the past. With a reputation as a player, he’s now a recovering alcoholic and has made progress in redeeming himself in the eyes of his family and the citizens of Henry Adams, Kansas. He’s not only turned his diner into a profitable business, but also mentors the town’s foster kids. And he’s even staying true to one woman—Bernadine Brown.
But all it takes is a moment of pride to blind Mal to his blessings—a moment that makes him betray his friends and family, and lose Bernadine’s trust and love. Will he ever be able to win her forgiveness?
Meanwhile Homecoming Weekend is fast approaching, and store owner Gary Clark is reunited with his high school sweetheart. All it takes is a few minutes for them to realize the spark is still there, but is it too late for second chances?
A little help from the good people of Henry Adams may give both Mal and Gary the best second chance at the happiness they missed the first time around…

Second Time Sweeter by Beverly Jenkins
My rating: 4 of 5 stars

I added this book on a whim because I was so surprised to see a contemporary novel written by Beverly Jenkins, an author, who for me, has always been associated with historical romance novels.

Apparently, this book is a part of an ongoing series I knew absolutely nothing about. I didn’t intend to start reading another series- I know, you’ve heard that a million times- much less start in on the ninth book. I don’t have time to binge read the previous eight installments, so I just took a leap and dived in, hoping for the best.

The story appears to be centered around Bernadine Brown, the owner of the small Kansas town of Henry Adams. As the story begins, we learn that Bernadine is broken hearted after the man she was dating, Malachi July, pulled a terrible stunt, putting everything he had worked so hard to achieve at risk.

If that weren’t bad enough, Mal, knowing he has disappointed so many people and hurt Bernadine terribly, is behaving almost as if HE is the injured party.

Meanwhile, store owner, and single father, Gary Clark is hoping to reconnect with the woman he was forced to give up years ago, but never really got over. However, his ex-wife has other plans…

As the title suggests this is a story about second chances and forgiveness, which is the kind of story I’m always a sucker for. I loved Gary’s daughters and the solid family life he provided for them. I was rooting for him, hoping he would finally have a chance to regain what he lost.

While the story with Mal seemed more front and center, I confess I was a little flummoxed by his behavior, and his motives were a little weak. It took me a long time to warm up to him. I was hoping for more of a grand gesture from him, however, since this is an ongoing series, maybe Mal will get his chance to impress Bernadine in more sincere and thoughtful ways- Maybe with things money can’t buy, perhaps.

Although, I couldn’t shake the feeling I was missing out on some pertinent backstory with a few of these characters, I thought this was a super sweet story. I definitely want to keep up with the Henry Adams gang in the future, and hope to add a few of the previous chapters in the series into my reading schedule so I can get caught up to speed. 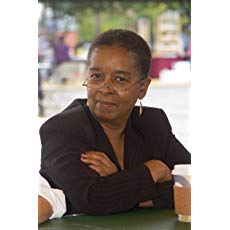 Beverly Jenkins is the recipient of the 2018 Michigan Author Award the Michigan Library Association, the 2017 Romance Writers of America Nora Roberts Lifetime Achievement Award, as well as the 2016 Romantic Times Reviewers’ Choice Award for historical romance. She has been nominated for the NAACP Image Award in Literature, was featured in both the documentary Love Between the Covers and on CBS Sunday Morning. Since the publication of Night Song in 1994, she has been leading the charge for multicultural romance, and has been a constant darling of reviewers, fans, and her peers alike, garnering accolades for her work from the likes of The Wall Street Journal, People Magazine, and NPR. If you would like to be notified when Beverly has a new release, you can sign up for her newsletter at http://www.beverlyjenkins.net.
Posted by gpangel at 1:00 AM