The Man Who Came Uptown- by George Pelecanos- Feature and Review 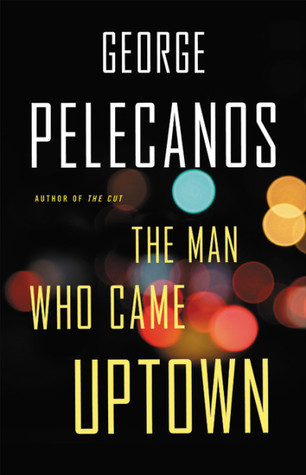 Michael Hudson spends the long days in prison devouring books given to him by the librarian, a young woman named Anna who develops a soft spot for her best student. Anna keeps passing Michael books until one day he disappears, suddenly released after a private detective manipulated a witness in Michael's trial.
Outside, Michael encounters a Washington, D.C. has changed a lot during his time locked up. Once shady storefronts are now trendy beer gardens and flower shops. But what hasn't changed is the hard choice between the temptation of crime and doing what's right. Trying to balance his new job, his love of reading, and the debt he owes to the man who got him released, Michael struggles to figure out his place in this new world before he loses control.
Smart and fast-paced, The Man Who Came Uptown brings Washington, D.C. in a high-stakes story of tough choices.

The Man Who Came Uptown by George Pelecanos
My rating: 5 of 5 stars

The Man Who Came Uptown by George Pelecanos is a 2018 Mulholland publication.

This is the first book by George Pelecanos, I’ve read in many years. I have a handful of his novels on my shelves, both print and digital, I needed to read first, but this one was so highly recommended to me by many of my Goodreads friends, I had to read this one immediately- and I’m so glad I did!

This crime novel is fittingly dedicated to Charles Willeford and Elmore Leonard. The tribute is both subtle and obvious.


This is a well-crafted crime novel, which is to be expected from a seasoned author who has built a solid reputation writing mystery/ thrillers- of course, he is just as respected for his television manuscripts.

This story, however, almost becomes philosophical, giving the reader a lot more to ponder on than the mystery and various criminal vignettes acted out by this exquisitely flawed cast of characters.

Book lovers and fans of literary fiction will drool over the storyline involving Anna, who works at the jail in the book group program, and Michael, a prisoner upon which she, and her book recommendations have an enormous impact.

Michael’s jail term is significantly reduced, and he is released after a PI named Phil Ornazian does a little wheeling and dealing on his behalf. Phil’s motives aren’t exactly pure, however. As it happens, our PI, and family man, Phil, has a lucrative side business, where he robs pimps and other criminals of their ill-gotten gains.

Phil, along with his sidekick, Thaddeus Ward, are hired to discover who robbed a wealthy family and violated their teenage daughter while they were away on vacation. Phil, who obviously plays loose and fast with the law, all but blackmails Michael, who is determined to play it straight and get his life in order, into driving a getaway car for him.

Meanwhile, Michael and Anna, who is married, meet by chance, rekindling their friendship, sharing more book recommendations and flirting with an illicit attraction to one another.

While there is a gritty crime drama, a mystery to solve, a fair amount of action, and few nail- biting moments in the story, what stands out the most are the characterizations. Is one crime worse than the other? After repeated failures, has Michael finally put his criminal escapades behind him? How has Anna’s influence on him and his newly acquired love of literature influenced him? Will Anna pursue something beyond friendship with Michael, or will she remain loyal to her husband?

I loved this book! I didn’t go into it with extra high expectations, thinking of it only in terms of crime fiction. What I got was something far more in depth and redeeming. It’s homage to books and literature, it’s a deep character analysis, and a piece of literary fiction, disguised as a mystery-thriller. It’s stylish and sleek, deep and thoughtful, and felt honest and real. The only complaint I have is that it was over far too soon!! 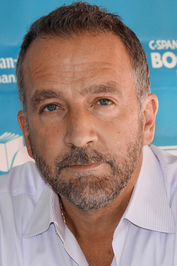 George Pelecanos was born in Washington, D.C. 1957. He worked as a line cook, dishwasher, bartender, and woman's shoe salesman before publishing his first novel in 1992.
Pelecanos is the author of eighteen novels set in and around Washington, D.C.: A Firing Offense, Nick's Trip, Shoedog, Down By the River Where the Dead Men Go, The Big Blowdown, King Suckerman, The Sweet Forever, Shame the Devil Right as Rain, Hell to Pay, Soul Circus, Hard Revolution, Drama City, The Night Gardener, The Turnaround, The Way Home, The Cut, and What It Was. He has been the recipient of the Raymond Chandler award in Italy, the Falcon award in Japan, and the Grand Prix Du Roman Noir in France. Hell to Pay and Soul Circus were awarded the 2003 and 2004 Los Angeles Times Book Prizes. His short fiction has appeared in Esquire, Playboy, and the Suspects, Best American Mystery Stories of 1997, Measures of Poison, Best American Mystery Stories of 2002, Men From Boys, and Murder at the Foul Line. He served as editor on the collections D.C. Noir and D.C. Noir 2: The Classics, as well as The Best Mystery Stories of 2008. He is an award-winning essayist who has written for The New York Times, The Washington Post, GQ, Sight and Sound, Uncut, Mojo, and numerous other publications. Esquire magazine called him "the poet laureate of the D.C. world." In Entertainment Weekly, Stephen King wrote that Pelecanos is "perhaps the greatest living American crime writer." Pelecanos would like to note that Mr. King used the qualifier "perhaps."
Pelecanos served as producer on the feature films Caught (Robert M. Young, 1996), Whatever (Susan Skoog, 1998) (George and Mike Baluzy, 1999), and was the U.S. of John Woo's cult classic, The Killer and Richard Bugajski's Interrogation. Most recently, he was a producer, writer, and story editor for the acclaimed HBO dramatic series, The Wire, winner of the Peabody Award and the AFI Award. He was nominated for an Emmy for his writing on that show. He was a writer and co-producer on the World War II miniseries The Pacific, and is currently at work as an executive producer and writer on David Simon's HBO dramatic series Treme, shot in New Orleans.
Pelecanos lives with his family in Silver Spring, Maryland.