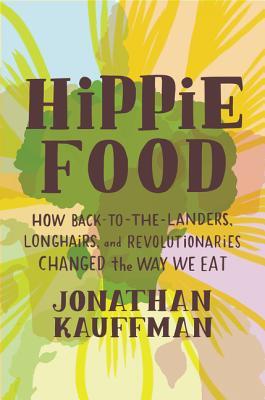 An enlightening narrative history—an entertaining fusion of Tom Wolfe and Michael Pollan—that traces the colorful origins of once unconventional foods and the diverse fringe movements, charismatic gurus, and counterculture elements that brought them to the mainstream and created a distinctly American cuisine.
Food writer Jonathan Kauffman journeys back more than half a century—to the 1960s and 1970s—to tell the story of how a coterie of unusual men and women embraced an alternative lifestyle that would ultimately change how modern Americans eat. Impeccably researched, Hippie Food chronicles how the , revolutionaries, and back-to-the-landers rejected the square establishment of President Richard Nixon’s America and turned to a more idealistic and wholesome communal way of life and food.
From the mystical rock-and-roll cult known as the Source Family and its legendary vegetarian restaurant in Hollywood to the Diggers’ brown bread in the Summer of Love to the rise of the co-op and the origins of the organic food craze, Kauffman reveals how today’s quotidian whole- staples—including sprouts, tofu, yogurt, brown rice, and whole-grain bread—were introduced and eventually became part of our . From coast to coast, through Oregon, Texas, Tennessee, Minnesota, Michigan, Massachusetts, and Vermont, Kauffman tracks hippie food’s journey from niche oddity to a cuisine that hit every corner of this country.
A slick mix of gonzo playfulness, evocative detail, skillful pacing, and elegant writing, Hippie Food is a lively, engaging, and informative read that deepens our understanding of our culture and our lives today.

Hippie Food: How Back-to-the-Landers, Longhairs, and Revolutionaries Changed the Way We Eat by Jonathan Kauffman
My rating: 4 of 5 stars

Hippie Food by Jonathan Kauffman is a 2018 William Morrow publication.

This well- researched book delves into the way the sixties counterculture raised awareness and concerns about preservatives and other food additives, and changed our eating habits, incorporating brown rice, wheat bread, tofu, and organics into mainstream consciousness, and into supermarkets. These foods now grace our tables as everyday staples, a far cry from the white rice, white flour, and packaged white bread frequently used in households up to that point.

“Health in America is controlled by the refined food industrialists who support a multi-million- dollar business.” Adelle Davis

Why did the counterculture start eating foods like brown rice, tofu, granola, and whole-wheat bread in the 1960’s and 1970’s?

Tracing just how these fringe ideas and ingredients spread to so many communities felt like an impossible task, fifty years later. When I would ask former they thought natural foods had taken off all over the country at the same time, swear to God, half a dozen of them answered, “Magic”. Then I would start talking to them about what they themselves were during those years and the real answer emerged: travel.

As a child, I remember my parents buying that brick style block of Sunbeam white bread. It really wasn’t until much later- in the 1980’s that wheat bread became more commonplace, at least in my neck of the woods. Now, I simply can’t imagine ever buying white bread again. I haven’t eaten white bread in decades. I never gave much thought as to how or when these changes began to take hold, but once I started reading this book, I was surprised by the humble beginnings of organic and brown rice farming, and the history of wheat bread.

‘Gypsy Boots feel so fine, I feel so great. So, let me go open that gate. I just have a had tremendous date with a glass of milk and a soy bean cake. All my muscles are strong and loose, because I drink lots of mango juice. For scorns and frowns I have no use, cause I feel wild as a goose. Life is a game of take and give. The world is my brother and I love to live. So, what’s this living really worth if there isn’t any peace on earth.’

For the foodie, this is a fun and fascinating journey, written with a little wit and humor, and loaded with interesting trivia. Be aware, though, that if you are looking for a recipe book, this is not one. However, if you are into organics and healthy foods you will find this book to be very interesting.
I really enjoyed this book tremendously. It was a learning experience and I discovered so many things about whole foods, and the fun history behind the trends and how they eventually became our ‘new normal’. 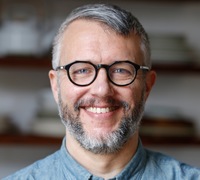 Jonathan Kauffman grew up in a lentil-loving Mennonite family in Northern Indiana in the 1970s. He went to college in the Twin Cities and then moved to San Francisco. After working as a line cook for a number of years, he left the kitchen for what seemed at the time like the more lucrative world of journalism. Jonathan was a restaurant critic for 11 years in the Bay Area and Seattle (East Bay Express, Seattle Weekly, SF Weekly), where his criticism awards from the James Beard Foundation, the International Association of Culinary Professionals and the Association of Food Journalists, among others. He joined the staff of the San Francisco Chronicle in 2014. There, he covers the intersection of food and culture, whether that means the rise of cookie Instagrammers or the effects of gentrification on small, family-run restaurants.
Posted by gpangel at 1:00 AM