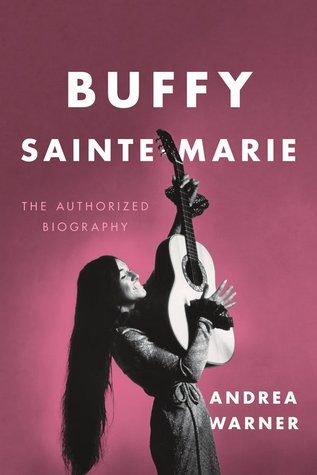 Folk hero. Rock icon. Living legend. Buffy Sainte-Marie is all of these things, and Greystone is proud to celebrate the incredible Cree singer-songwriter, activist, and educator with her authorized biography.
For more than 50 years, Sainte-Marie has made her voice heard through her music, art, and activism, establishing herself among the ranks of folk greats such as Joni Mitchell and Bob Dylan. She’s released more than twenty albums and ten singles, survived being blacklisted by two U.S. presidents, and has received countless accolades, including the only Academy Award ever to be won by a First Nations artist. Her most recent album, Power in the Blood (2015), won the Polaris Music Prize and two Juno Awards. But Sainte-Marie is so much more than a musician; she is also an entrepreneur, a pioneer in digital art, and an important cultural activist who has worked tirelessly advocating for and protecting Indigenous rights and freedoms. Her incredible contributions to society will be recognized when she receives the Allan Waters Humanitarian Award at the 2017 Juno Awards, and will also come to light in her forthcoming biography.
Penned by leading music, culture, and feminist writer Andrea Warner, Buffy Sainte-Marie: An Authorized Biography will weave a powerful, intimate look at the life of a beloved artist and everything that she has accomplished in her 76 years (and counting)

Buffy Sainte-Marie: The Authorized Biography by Andrea Warner
My rating: 4 of 5 stars

Between the ages of five and seven, I liked the am pop radio stations that came in clear enough in my small rural location. Those stations were more apt to play ‘These Boots are Made for Walking’ by Nancy Sinatra than anything remotely folk sounding. However, folk music was all over the television in prime time variety shows, the news and other mediums and we even sang some generic folk songs in our music class at school. I loved it, to be honest. My mother allowed me, at the ripe old age of seven to buy Judy Collins and Joan Baez records, and I nearly wore them out- before I fell in love with David Cassidy, Bobby Sherman and The Osmond Brothers, that is. 😊

I never really connected to folk music in the same way again, until I was much older. But, folk music was never a genre I was well versed in. I knew the heavy hitters from the sixties and seventies, but never scratched too far beneath the surface. So, to be perfectly honest, I had never heard of Buffy Sainte-Marie- although now, I realize I was marginally aware of one or two of her songs. Therefore, this is really my first introduction to her and her background.

For anyone else like me, who are mostly unfamiliar with this artist, Buffy is a Cree member- one of the largest groups of First Nations in Canada and has an Indigenous heritage. Her background has led her to focus on the rights and freedoms of the Indigenous people. 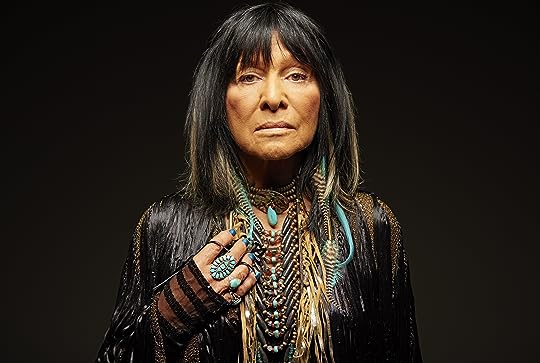 Her musical abilities are natural and self-taught, and her songs, while ever changing, usually stuck with themes of peace over war and the individual’s responsibility in helping to prevent further bloodshed. Her message truly resonated with the anti-war sentiment in the sixties and her signature song, ‘Universal Soldier’ became an anthem.

Yet, Buffy never did cross over into the mainstream the way her white counterparts did. She remained out of the public glare, while commanding the respect of many other folk musicians. Her songs were recorded and covered by Elvis, Glen Campbell, and Donavon, just to name a few. But, her personal life remained an enigma- maybe even to some of her biggest fans.

This book takes the reader back to Buffy’s troubled childhood, which explains a lot about her aversion to socializing and publicity tactics. We follow her through her early years in the music business, her struggles with publishing rights, and her activism. She was even a regular on Sesame Street for a time until budget cuts forced her out. Her private life was also examined, which was not always easy to read about, so be prepared for a few uncomfortable passages.

However, once most of these bad patches were behind her, Buffy carved out a niche for herself and although still active musically, she put a lot of her energy behind teaching and education, paving the way for indigenous people in more ways than she is credited for, opening doors for them in many areas, including music.

I liked the fact that this was an authorized biography. The author has the permission to print and publish anything she wished with her subject’s permission, which to me, says a lot. One thing I always look for in a biography is organization. This book has a nice presentation, mostly done in the traditional chronological way. She named each chapter after one of Buffy’s songs, which was a nice touch, I thought.

While Buffy’s life has certainly been extraordinary, her music important and emotional, the book, at times, is a bit dry. It is also rather brief, and I’m not entirely sure how well it fully captured Buffy’s persona or spirit.

Other than that, the book is certainly worth checking out. I knew little or nothing about this artist and am glad to have discovered her. I learned more insights into the music business, how Buffy survived on the fringes of major, household name, success and was impressed by her musical abilities after watching a few YouTube videos. However, I also learned a lot about First Nations and the many challenges facing Indigenous people.

From a personal standpoint, I admired Buffy’s forthrightness, and her boldness and courage. I see in her a little bit of a kindred spirit in that she sees through a lot of smoke and mirrors and refuses to play the required games. She was a true pioneer and a real life rebel- which always comes at a cost. She lives her life on her own terms and is someone who seems to need space away from the crowds and too much peopling. I can relate to that, but I’m happy she still performs, records, writes and is still a strong advocate.

This is a quick and easy read, but also an interesting outline of Buffy Sainte -Maire’s life and times. 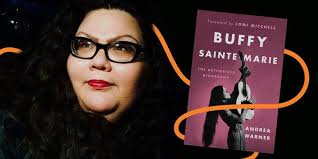 Andrea Warner is the author of Buffy Sainte-Marie: The Authorized Biography (Sept. 25, 2018, Greystone) and We Oughta Know: How Four Women Ruled the '90s and Changed Canadian Music (Eternal Cavalier Press, 2015). A freelance writer, Andrea is also an associate producer at CBC Music, a theatre critic at the Georgia Straight, a radio columnist, and the co-host of the weekly podcast Pop This!. Her pronouns are she/her/hers, and she is a settler who was born and raised in Vancouver on the unceded traditional territories of the Musqueam, Squamish, and Tsleil-Waututh First Nations. Pop culture, art, and feminism make her happy. @_AndreaWarnerContact: hello@theandreawarner.com