FLASHBACK FRIDAY- The Inheritance by Tom Savage- Feature and Review 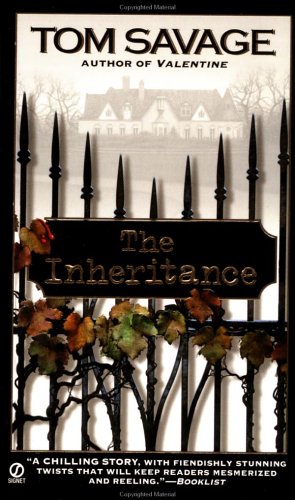 Holly is about to collect on an inheritance from a family she's never met. In an imposing mansion, looming like a shroud above Long Island Sound, the Randall family is waiting. Tonight, Holly's fortune is coming at a terrifying price. "A chilling story, with fiendishly stunning twists that will keep readers mesmerized and reeling."--"Booklist." Warner Bros. An LG and Mystery Guild selection.

The Inheritance by Tom Savage
My rating: 5 of 5 stars

I read this book many years ago. I was going through my bookshelf the other day and found that I had kept it all these years. I had forgotten alot of it, and decided to read it again, which is something I don't do very often. CR 1998, 369 pages long, The Inheritance, written by Tom Savage, is a mystery, suspense novel. The plot takes many twist along the way, some of them downright shocking. None of the revelations are there just for shock value, this is a very cleverly plotted story, giving the reader small clues and information slowly. We know right away that there has been a murder, we know that a vast fortune has been inherited by a girl who was unaware of her heritage. Holly Smith was adopted and knew that, but had no idea who her biological family was. She gets a letter from her Aunt Alicia informing her she is the heir to a fortune. As Holly takes her time deciding if she should respond and how, she learns her aunt has passed away and so Holly is left to deal with the entire situation on her own.
We are also clued in fairly early on that Holly's uncle was expecting to inherit the fortune and was unaware of Holly and his father's will, leaving the bulk of his fortune to his neice. So, we know that Holly is not very well liked by her new family and could be in danger.
We watch as Holly adjust to wealth, makes friends, allies, and as she figures out who her enemies are. It goes without saying, don't make up your mind about anyone until the very last page- literally. A great read!!