Whiskey in a Teacup: What Growing up in the South Taught Me About Life, Love, & Baking Biscuits by Reese Witherspoon- Feature and Review 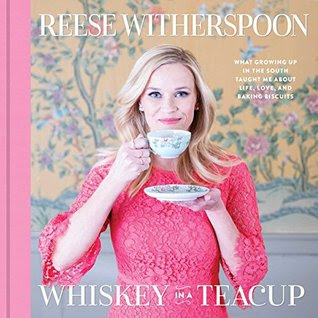 Academy award–winning actress, producer and entrepreneur Reese Witherspoon invites you into her world, where she infuses the southern style, parties and traditions she loves with contemporary flair and charm.Reese Witherspoon’s grandmother Dorothea always said that a combination of beauty and strength made southern women 'whiskey in a teacup'. We may be delicate and ornamental on the outside, she said, but inside we’re strong and fiery.
Reese’s southern heritage informs her whole life, and she loves sharing the joys of southern living with practically everyone she meets. She takes the South wherever she goes with bluegrass, big holiday parties, and plenty of Dorothea’s fried chicken. It’s reflected in how she entertains, decorates her home, and makes holidays special for her kids — not to mention how she talks, dances and does her hair (in these pages, you will learn Reese’s fail-proof, only slightly insane hot-roller technique). Reese loves sharing Dorothea’s most delicious recipes as well as her favourite southern traditions, from midnight barn parties to backyard bridal showers, magical Christmas mornings to rollicking honky-tonks.
It’s easy to bring a little bit of Reese’s world into your home, no matter where you live. After all, there’s a southern side to every place in the world, right?

Whiskey in a Teacup: What Growing Up in the South Taught Me About Life, Love & Baking Biscuits by Reese Witherspoon
My rating: 4 of 5 stars

Whiskey in a Tea Cup: What Growing Up in the South Taught Me About Life, Love & Baking Biscuits by Reese Witherspoon is a 2018 Touchstone publication.

I feel like I’ve watched Reese Witherspoon grow up. She was always so funny and seemed approachable. She has proven herself to be not only an accomplished actress, but a highly successful entrepreneur and businesswoman. However, she did face an uncomfortable moment in her life, a situation that may have been the catalyst that rededicated Reese to her southern roots.

This is an adorable book, with wonderful color photos, recipes and lots of southern-isms. I’m from the south- born in the deep rural south, at that, moving around a great deal until I finally landed in Texas. So, I could relate to some of the rules and etiquette unique to the southern region.

However, Reese’s version of southern is more suited to certain social classes than the one in which I was born.

There's some old southern traditions Reese heartily embraces, that I simply couldn’t see myself reverting to, like wallpaper, for example. But, that’s probably just a matter of taste. I’m also not too big on bluegrass or country music, but again, that’s just me.

However, I did enjoy her emphasis on civility, politeness, and manners. Those things should never go out of style. The book has a very upbeat and fun tempo, although at times, on the audiobook format I thought it went a little overboard, bordering on contrived. ( I started this one on audio, but switched to e-book a quarter of the way in. Reese did an admirable enough job with the narration, but kept having to refer to the PDF add on for audio listeners, a bonus provided for the recipes included. Once I switched to e book, and saw all those amazing photos, I must recommend going with print or e-book if possible.)

The book almost has the same lay- out as a women’s magazine might, centering on family traditions, popular eateries, decorating for various holidays, hosting dinner parties and of course the requisite recipes included. There are lovely photos of Reese and her children and her beautiful home, with anecdotes about her parents and grandparents.

But, the book is also a memoir, and I think Reese’s message is that her southern upbringing is hardwired into her very being. No matter where she is living she still adheres to those values and principles. She’s matured and realizes that she can be a strong feminist voice, run her businesses and enjoy a successful career and still be a lady and enjoy doing things that makes her feel feminine, and brings her comfort and joy, as well.

She enjoys the benefits of her success, has weathered a few bumps in the road, and learned to embrace a simpler life, creating a nice homey environment for her family and friends and still seems just as approachable as ever.

This is a fun book and gives fans an intimate glimpse at Reese’s life away from Hollywood, which, by the way, is seldom mentioned. This is strictly about her personal time, her southern roots, and about fond family memories and influences that inspired her to become the person she is today. 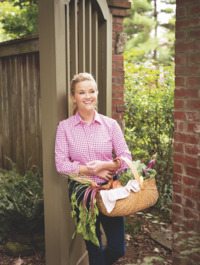 Laura Jeanne Reese Witherspoon is an American actress, producer, and entrepreneur. She is the recipient of several awards, including an Academy Award, a Primetime Emmy Award, a BAFTA Award, and two Golden Globe Awards. Born in New Orleans, Louisiana, and raised in Tennessee, she began her career as a teenager, making her professional screen debut in The Man in the Moon (1991), for which she was nominated for a Young Artist Award. Witherspoon's breakthrough role was playing Elle Woods in the 2001 film Legally Blonde, for which she received her second Golden Globe nomination. In 2014, Witherspoon produced the thriller Gone Girl and received critical acclaim for portraying Cheryl Strayed in Wild, for which she earned her second Academy Award nomination for Best Actress and a fourth Golden Globe nomination. In 2017, she co-produced and starred in the HBO drama series Big Little Lies, for which she received two Primetime Emmy Award nominations for Outstanding Lead Actress in a Miniseries or a Movie and Outstanding Limited Series, winning the latter as a producer.Witherspoon owns a production company Hello Sunshine, a clothing company Draper James, and she is actively involved in children's and women's advocacy organizations. She serves on the board of the Children's Defense Fund (CDF) and was named Global Ambassador of Avon Products in 2007, serving as honorary chair of the charitable Avon Foundation. She received a star on the Hollywood Walk of Fame in 2010.
Posted by gpangel at 2:30 AM