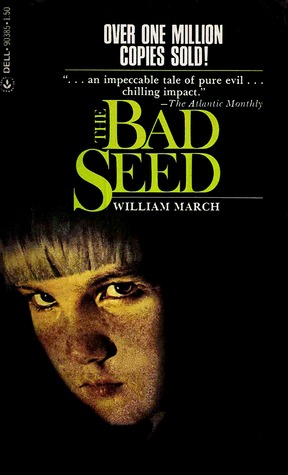 William March's 1954 classic thriller that's as chilling, intelligent and timely as ever before. This paperback reissue includes a new P.S. section with author interviews, insights, features, suggested reading and more.

What happens to ordinary families into whose midst a child serial killer is born? This is the question at the center of William march's classic thriller. After its initial publication in 1954, the book went on to become a million–copy bestseller, a wildly successful Broadway show, and a Warner Brothers film. The spine–tingling tale of little Rhoda Penmark had a tremendous impact on the thriller genre and generated a whole perdurable crop of creepy kids. Today, The Bad Seed remains a masterpiece of suspense that's as chilling, intelligent, and timely as ever before.

The Bad Seed by William March
My rating: 4 of 5 stars

The Bad Seed by William March is a 1972 Dell publication. This book was originally published in 1954.

Evil children can be found in literature, going back centuries. Matilda from ‘The Monk’ by Matthew Lewis ,written back in 1796, for example. However, evil children became a popular horror novel trope beginning in the fifties and reaching an epic peak in the seventies.

Evil children still make an appearance in movies and novels, never completely going out of style, and of course, are not solely confined to the horror or thriller categories.

If you do a Google search for a list of ‘Evil Children’ in literature, you’ll get an eclectic, and interesting group of lists. However, there is always one child that makes the list every single time: little Rhoda Penmark.

I read this book decades ago, and later watched the 1956 film version. While I remembered the basics of the story, I’d forgotten most of the finer details that made this book such a fantastic thriller. I’m glad I picked this one as part of my October/Halloween reading this year. It’s not a supernatural thriller, but is spine tingling, and hair raising, all the same- even after all these years.

“It seemed to her than violence was an inescapable factor of the heart, perhaps the most important factor of all- an ineradicable thing that lay, like a bad seed, behind kindness, behind compassion, behind the embrace of love itself. Sometimes it lay deeply hidden, sometimes it lay close to the surface; but always it was there, ready to appear, under the right conditions, in all its irrational dreadfulness.”

With her husband away on business for an entire summer, Christine is alone with her smart, clever, and precocious, eight -year old daughter, Rhoda. The summer gets off to a tragic beginning, when a little boy in Rhoda’s class dies. Christina begins to have dark thoughts about her daughter’s peculiar behavior, which sparks a sudden keen interest in crimes and those who commit serial murder. As Christine becomes more aware of her daughter’s lack of conscience, the coldness in her, she becomes increasingly anxious. This does not go unnoticed by Christine’s neighbor, who thinks the world of her and Rhoda.

The deeper Christine researches the mind of murderers, especially female serial killers, she begins to trace her own family tree, which reveals a horrible, shocking truth. Can evil be inherited?
It’s the classic debate of ‘nature versus nurture’.

I am so glad I put everything down and gave this sinister little book another look. I was struck by many things this second time around that my younger self wouldn’t have pondered on for too long, or noticed at all, taking everything at face value – ironically.

The book seems a little ahead of its time and tackled some feminist topics we still face today. Except for Leroy, the female characters outnumber the males and are far more dominant. The psychology, especially in the 50s, is very interesting, and the killers Christine researched were real life murderers, several of whom I’d never heard of. This, of course, required some internet investigations, and informed me of some rather shocking true crime cases!

Now that we’ve all become so jaded, a book like this one wouldn’t raise eyebrows today, as it is all too obvious. But, in the fifties, the female criminal is still considered rare, and forget about suspecting such an adorable, innocent looking little girl of being a cold -blooded killer. But, what makes this book so effective, and still quite chilling, even by today’s desensitized viewpoint, is the calculation and mannerisms Rhoda exhibits, and the cluelessness of everyone around her.

Not only that, it raised pertinent questions about inherited proclivities, and a examines the shrewd, diabolical mind a sociopath, who plans and carries out premeditated crimes without the slightest bit of remorse. I’m still impressed with this book, despite its predictable nature. This is a novel that set a president, a trend-setter, and helped spawn an entire trope, both in books and movies, featuring sinister, evil children.

But, more importantly, we are reminded that looks can be deceiving, that evil has many faces, and despite their cherubic little faces and adorable giggles, even children can not be presumed innocent. 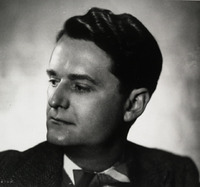 William March (born William Edward Campbell) was an American author and a highly decorated US Marine. The author of six novels and four short-story collections, March was a critical success and heralded as "the unrecognized genius of our time", without attaining popular appeal until after his death. His novels intertwine his own personal torment with the conflicts spawned by unresolved class, family, sexual, and racial matters. March often presents characters who, through no fault of their own, are victims of chance, and writes that freedom can only be obtained by being true to one's nature and humanity.
Posted by gpangel at 12:00 AM