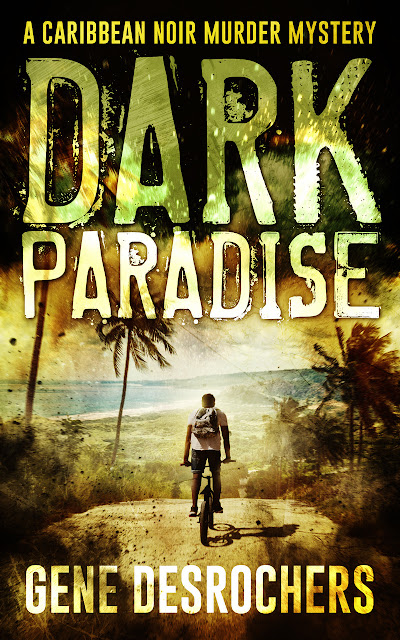 Boise Montague’s life in Los Angeles has fallen apart. After his wife dies, he returns to the tiny island where he grew up. Unfortunately, coming home doesn’t bring him the peace he’s looking for.

Things have changed drastically since his last visit. The island has moved on and so have the people he once knew. When Boise tries to find the one friend he thinks he can count on to be there for him, he’s confronted with another death. A murder. A murder that the police did not think important enough to investigate thoroughly.

Boise wants answers. He enlists a local reporter named Dana, who has theories of her own, to help him dig deeper.

With not much left to lose, a bone to pick with the justice system, and a relentless partner, Boise sets out to do what the police would not: solve the murder of Jeffrey Black.

The island of St. Thomas is a gleaming tropical paradise. Welcome to the Caribbean, where murder is as common as sunshine.

Dark Paradise by Gene Desrochers
My rating: 4 of 5 stars

Dark Paradise by Gene Desrochers is a 2018 Acorn publication.

A fresh and compelling mystery with a cast of interesting characters-

Set against the tropical backdrop of the balmy Caribbean island of St. Thomas, this story is centered around Boise Montague, a man who recently lost his wife. Boise needs to get out of LA, regroup, touch base and reconnect with his roots. To that end, he hopes to become reacquainted with an old pal from his childhood. But, when he learns his old friend had fallen into the drug trade and was murdered, Boise feels an intense desire to figure out how his friend’s life took such a terrible turn and how he ended up dead. Thus, begins an investigation that will unearth more than one shocking crime and keep Boise in a constant state of unease and danger.

This mystery was exactly the change of pace I’ve been craving. The location is different, the characters are quite different from any I’ve encountered in recent memory. The plot is also extraordinary. The story has the feel of a crime drama, while the atmosphere captures the tropics and the underbelly of Caribbean paradise.

Boise is so real and also very sympathetic. He’s got a few extra pounds, some health issues, and a thing for Guinness beer. He’s lost, showing definitive symptoms of depression, but perhaps he’s found a way to begin putting his demons behind him. The secondary characters are very well written and add a tremendous amount of depth and authenticity to the story, especially Dana. I found the mystery to be very absorbing and challenging to me since it was not written in a dull, formulaic format.

Don’t get me wrong, this is not an ‘outside the box’ type of story, it’s just got a different sort of vibe that is like a breath of fresh air. I could grow to like Boise and can see where his character and this series could really develop. This debut novel lays a solid foundation for any subsequent installments, which I do hope will be forthcoming.

Boise proves it is hard to come home again, that time doesn't stand still, but maybe it could be that the island needs Boise, just as much as he needed it. 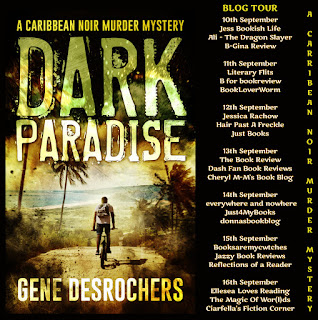 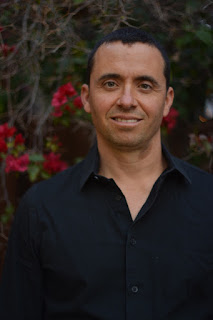 Gene Desrochers hails from a dot in the Caribbean Sea called St. Thomas. He grew up with minimal supervision and free-roaming animals in a guesthouse that also served as a hospital during wartime. He has spent his life steadily migrating west, and now finds himself in Los Angeles with a beautiful wife, cats, and kids. After a lifetime of writing and telling short stories, he ventured into the deep end, publishing his first novel, Dark Paradise in 2018. If you ask, he will regale you with his Caribbean accent and tennis prowess.


https://www.genedesrochers.com/
Posted by gpangel at 2:00 AM