Those Other Women by Nicola Moriarty - Feature and Review 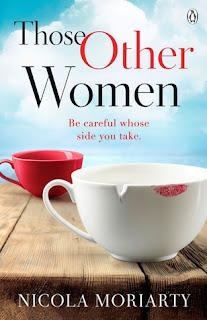 From the author of The Fifth Letter comes a controversial and darkly comic story about the frustrations of being a childless woman in the modern baby-obsessed world... .
Poppy's world has been tipped sideways: the husband who never wanted children has betrayed her with her broody best friend.
At least Annalise is on her side. Her new friend is determined to celebrate their freedom from kids, so together they create a Facebook group to meet up with like-minded women, and perhaps vent just an little about smug mummies' privileges at work.
Meanwhile, their colleague Frankie would love a night out, away from her darlings - she's not had one this decade and she's heartily sick of being judged by women at the office as well as stay-at-home mums.
Then Poppy and Annalise's group takes on a life of its own and frustrated members start confronting mums like Frankie in the real world. Cafés become battlegrounds, playgrounds become war zones and offices have never been so divided.
A rivalry that was once harmless fun is spiraling out of control.
Because one of their members is a wolf in sheep's clothing. And she has an agenda of her own . . .

Those Other Women by Nicola Moriarty
My rating: 4 of 5 stars

Those Other Women by Nicola Moriarty is a 2018 Penguin publication.

A timely and cautionary tale-

When Poppy is informed by her lifelong friend that she and Poppy’s husband have been having an affair, which has resulted in a pregnancy, Poppy is blindsided. It’s not just the affair, it’s that she and her husband had both agreed they didn’t want kids. Now she’s been told that he really did want kids after all.

When Poppy makes a new friend, Annalise, they decide to create a private Facebook group for women without kids- a direct response to a similar group for women who do have children. It’s supposed to be a supportive kind of group, but the comments become mean and vitriolic in no time flat. To make matters worse, there is a mole in the group. Before long the members of the two Facebook groups start and all -out war with one another, and Poppy, who never intended for any of that to happen, gets caught in the middle of it. Meanwhile, Annalise is harboring an explosive secret that, if discovered, could end her friendship with Poppy.

Social media is a wonderful place to find like-minded people, to receive and give advice, to support people, to get support. But, there is a dark side of social media, as we all know, and it can quickly get out of control. This is a story that reminds us that even if we think we have a safe place to vent our frustrations, you can not completely count on privacy and you might want to temper yourself before serious damage is done.

It is also a story that highlights the various choices women have today and the way some judge others for choosing a path different from theirs. Many women today have chosen to pass on motherhood for many reasons. Others embrace motherhood, while still pursuing a demanding career, while others stay at home. Every one of these options is perfectly fine. But, some non-mothers feel left out, looked down on, as though choosing to forego parenthood is a sin, or that there is something fundamentally wrong with them. I have heard them lament about working moms getting special treatment or extra time off during the work day so they can take care of a sick child or pick their kids up from school or daycare. Mothers may feel entitled to take that time and are unapologetic about missing an important meeting or causing someone else to have to work late or increasing the workload for someone already feeling overwhelmed. I’ve actually heard these arguments, and honest frustrations from both sides. This is why I say this novel is very timely. It is also so realistic I could really see something like this happening.

As we will see, both sides have legit arguments, but instead of working through those issues like adults, they lash out, pout, and point fingers and hold grudges. Presumptions and pre-conceived notions, as well, as gossip, secrets, lies and misunderstandings all aided by the rapid, and toxic atmosphere on social media nearly culminated in the ultimate cat fight. But, without giving too much away, the ladies on both sides of the pond will discover how petty their worries really are.

I loved the way this story ended. Ladies, we are all on the same team here. We all experience difficulties and challenges on a daily basis because we are women. The last thing we need is a bunch of infighting. Let’s be good to each other, support each other, and most importantly let’s respect each other. You never know what someone is going through or what challenges they are facing. In the big scheme of things, working through our differences so that we can help people in far more serious circumstances is a goal we should all strive to achieve. Count your blessings and give your sisters in spirt a virtual hug and a little encouragement. We're all in this thing together!! 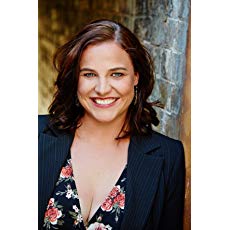 Nicola Moriarty is a Sydney-based novelist, copywriter and mum to two small (but remarkably strong willed) daughters. In between various career changes, becoming a mum and completing her BA, she began to write. Now, she can't seem to stop. Her published works include the novels Those Other Women (2018), The Fifth Letter (2017), Paper Chains (2013) and Free-Falling (2012) as well as contributions to two UK anthologies. She is also the younger sister of best-selling and award-winning authors, Liane Moriarty and Jaclyn Moriarty.

The Fifth Letter has been optioned for film and television by Universal Cable Productions and was a Top Ten Bestseller in Australia with Australian Women's Weekly calling it 'a pacey, circle-of-friends thriller, which accelerates in its intensity and sheer originality with every page"; while the UK's Sun on Sunday said, "With secrets and intrigue, this is a compulsive read." It was The Librarian's Choice top pick for March 2017 and was featured in Popsugar's Best Books for Fireside Reading plus their Favourite Books for the Year (so far)!

Nicola has been awarded the Fred Rush Convocation prize from Macquarie University, along with 'Best Australian Debut' from Chicklit Club. She has been published in Australia, The United States and The United Kingdom and her books have been translated into German, Dutch and Hungarian.