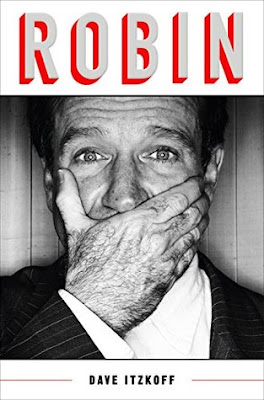 From New York Timesculture reporter Dave Itzkoff, the definitive biography of Robin Williams – a compelling portrait of one of America’s most beloved and misunderstood entertainers.
From his rapid-fire stand-up comedy riffs to his breakout role in Mork & Mindy and his Academy Award-winning performance in Good Will Hunting, Robin Williams was a singularly innovative and beloved entertainer. He often came across as a man possessed, holding forth on culture and politics while mixing in personal revelations – all with mercurial, tongue-twisting intensity as he inhabited and shed one character after another with lightning speed.
But as Dave Itzkoff shows in this revelatory biography, Williams’s comic brilliance masked a deep well of conflicting emotions and self-doubt, which he drew upon in his comedy and in celebrated films like Dead Poets Society; Good Morning, Vietnam; The Fisher King; Aladdin; and Mrs. Doubtfire, where he showcased his limitless gift for improvisation to bring to life a wide range of characters. And in Good Will Hunting he gave an intense and controlled performance that revealed the true range of his talent.
Itzkoff also shows how Williams struggled mightily with addiction and depression – topics he discussed openly while performing and during interviews – and with a debilitating condition at the end of his life that affected him in ways his fans never knew. Drawing on more than a hundred original interviews with family, friends, and colleagues, as well as extensive archival research, Robin is a fresh and original look at a man whose work touched so many lives.

Robin by Dave Itzkoff
My rating: 5 of 5 stars

Robin by Dave Itzkoff is a 2018 Henry Holt and Co. Publication.

After Robin Williams passed away, my daughter turned to me and said, “I grew up with Robin Williams”. After a moment, I realized that in many ways, so had I. I was in my mid-teens when Robin burst onto the scene in that iconic episode of ‘Happy Days’ which led to ‘Mork & Mindy’. I loved that show and found Robin to be a fresh comedic talent who could pull off what appeared to be completely spontaneous dialogue and accompanied by high energy physical comedy. From that time forward I was a huge fan. I loved his stand -up routines and his movies.

For my daughter it was ‘Hook, then ‘Mrs. Doubtfire’, then as she got older, ‘Dead Poet’s Society’ and ‘Good Will Hunting', while I loved ‘Good Morning, Vietnam' and 'The Fisher King'.

While I seldom over react to a celebrity death, Robin’s hit me hard. I was so shocked I’m not sure I ever really processed it outside of the grim aftermath, as lurid details emerged, and social media passed its harsh judgments.

Even though four years have passed, and much has happened in that time, I still feel a jolt of pain when I think of him. I wouldn’t want to read just any old ‘rushed to publication’ book written about him and I’m sure there have been a few hastily thrown together ‘cash grabs” which quickly faded into obscurity. This book, however, is professionally done, well- organized, insightful, informative, often very entertaining, and course poignant look back at the life and career of the one and only Robin Williams.

I personally had no knowledge of Robin’s upbringing and was surprised by his childhood. I could relate in some ways as my father moved his family around nearly as frequently as Robin’s did. I understood how isolating it can be, no matter what your personality type, to start over in a new town, in a new school, surrounded by unfamiliar faces, and once again face the enormous task of making new friends and trying to fit in.

The beginning of Robin’s career was somewhat familiar to me, but I had forgotten a lot of the ups and downs in those early days. The drugs, alcohol, the sudden and intense success, followed by career fits and starts, with spurts of wide recognition followed by incredibly harsh critical bashing.


As a regular follower of Robin’s career, I began to recall much of the ground the author covered, but as far as Robin’s personal life went, I wasn’t all that knowledgeable. I knew he had problems with drugs, that Belushi’s death scared him straight, that Robin had been married and divorced, then remarried and had several children, but I was mostly in the dark when about the details behind his marriages and relationships with colleagues and friends.

The thing about this biography, that really stands out, is that it gives the reader a clearer picture of the man behind the frenetic comedy. Robin's fears, his goals, his hopes, and the demons that plagued him, how he made it all look spontaneous and easy. But, in reality, it was much harder to pull off than anyone ever knew. I was struck by how harsh the movie critics could be, bordering on downright nastiness.

Still, while Robin certainly made his share of sub-par films, overall his body of work is pretty solid, and I have to say, I thought that his improvisations often saved otherwise dull roles, that may have fallen flat if not for Robin’s putting his personal stamp on it. Of course, it backfired on him more than a few times, rather spectacularly. But, as harsh as the critics could be, the public often overrode their skepticism, making Robin's movie box office gold, time and time again.

I really enjoyed looking back on Robin’s career, reminiscing about some of his great roles, his hilarious jokes, and his energy. His personal life is fraught with as many ups and downs as his career, suffering with health problems and substance abuse issues. His battles with alcohol eventually broke up his long- time marriage to a woman who stabilized him in a way most others never could.

The concerns about Robin’s third marriage didn’t feel one hundred percent balanced and may have been the only place in the book where the author’s personal opinion was made evident. Nothing wrong with being independent or having a life which is not defined by your husband’s career. The subsequent estate disputes also painted her in a bad light, but I’m not sure the author approached these events in an entirely subjective manner.

The mystery surrounding Robin’s health in the last years of his life is just plain frustrating. His diagnosis, which may not have been the right one, only makes his suffering more poignant. What he was thinking is hard to discern. Some think he was very aware of what he was doing, while others think he was under the influence of the illness, which despite not knowing him personally, I agree with the latter. Looking at his life up that point, the trials he faced and the odds he overcame, I can’t help but think he was not himself at all at the time.

Reading about Robin’s struggles with his mind was utterly heartbreaking. By the end of the book as we relived Robin’s final days, once again, I was struck by the tremendous loss of talent. I swallowed down a huge and painful lump in my throat, as the impact his death had on the world of entertainment finally sank in. But, that is nothing compared to the loss his family and friends endured, the pain seeping through the pages as they coped not only with the loss, the manner of death, but with the court of public opinion.

The days after being no less stressful, but with the help and support of friends and family, the way to healing was launched. Following the brave example of his children, we can all look back on Robin’s life and career and remember him in the way he would want us to. Remember his compassion, the light he brought to those in need, the endless laughter, and hours of joy and entertainment he provided us with over the course of his life… and ours.

Personal note: The audio version of this book is very well done. If you have a chance to add it, it is worth it 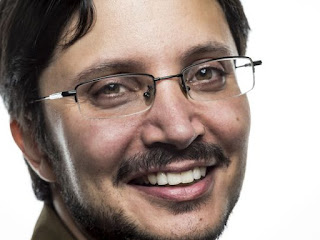 n 1999, Dave Itzkoff worked as an editorial assistant for Details magazine. He worked for Maxim magazine from 1999 to 2002 and Spin magazine from 2002 to 2006. From June 2007 to July 2008, Itzkoff worked as a freelance editor for the Sunday Styles section in The New York Times Dave is currently a culture reporter for The New York Times and writes frequently about film, television and comedy. His latest work is a biography of Robin Williams.
Posted by gpangel at 1:00 AM