Invitation to a Bonfire by Adrienne Celt- Feature and Review 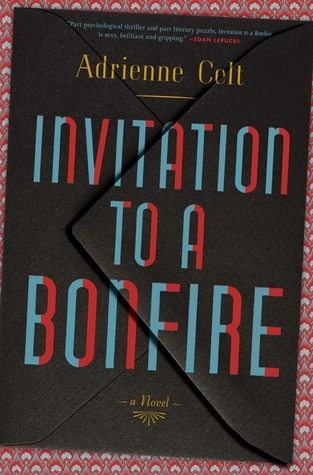 The seductive story of a dangerous love triangle, inspired by the infamous Nabokov marriage, with a spellbinding psychological thriller at its core.
In the 1920s, Zoya Andropova, a young refugee from the Soviet Union, finds herself in the alien landscape of an elite all-girls New Jersey boarding school. Having lost her family, her home, and her sense of purpose, Zoya struggles to belong, a task made more difficult by the malice her peers heap on scholarship students and her new country’s paranoia about Russian spies. When she meets the visiting writer and fellow Russian émigré Leo Orlov—whose books Zoya has privately obsessed over for years—her luck seems to have taken a turn for the better. But she soon discovers that Leo is not the solution to her loneliness: he’s committed to his art and bound by the sinister orchestrations of his brilliant wife, Vera.
As the reader unravels the mystery of Zoya, Lev, and Vera’s fate, Zoya is faced with mounting pressure to figure out who she is and what kind of life she wants to build. Grappling with class distinctions, national allegiance, and ethical fidelity—not to mention the powerful magnetism of sex—Invitation to a Bonfireinvestigates how one’s identity is formed, irrevocably, through a series of momentary decisions, including how to survive, who to love, and whether to pay the complicated price of happiness.

Invitation to a Bonfire by Adrienne Celt
My rating: 4 of 5 stars

Invitation to a Bonfire by Adrienne Celt is a 2018 Bloomsbury USA publication.

Honesty’s a girl who waits at the door
She speaks her piece without a roar.
Clarity shines a light in the dark
Her hand a torch, her mouth a spark.
To reveal is to do more (The whisper that we’re looking for; the listing step on drunken night-
Drunk on time and dearth and plight.)
A girl who snaps to a chime the hour
Knowing not her push or power.
To reveal is to bring clean
Though sometimes says more than we mean.
Perhaps it is our keenest sway
To sometimes mean more than we say.

This book took me by surprise!!

I knew this was an epistolary book and was supposedly based on the famous Nabokov marriage. This was enough to pique my interest.

But, I was blindsided by the sinister quality of the story-

In the 1920’s Zoya Andropova, a young refugee from the Soviet Union finds herself floundering at a prestigious all girls school in New Jersey.

But, when Leo Orlov, a fellow Russian, makes a visit, Zoya is enthralled by meeting her literary idol. The pair forges a bond, developing into a flirtation, then a full-fledged affair. But, Zoya is quite aware that Lev is married, to the beautiful Vera, a girl Zoya once had a brief encounter with. Not only that, it is quite clear Lev is more committed to his work, to finding a lost manuscript, than he is to the women in his life. This is a concession both Vera and Zoya are eventually willing to make. He has no trouble convincing Zoya, however, that they could have a life together, which prompts her to make some stunning decisions. But, it seems she may have underestimated her opponent. An epiphany dawns finally, and Zoya will ultimately decide her destiny and take charge of her identity.

This layered mystery which unfolds via letters and journals was strangely absorbing, capturing the climate of the times. The paranoia towards Zoya, the abuse she endures at school, her loneliness, which leads her to cling to Lev, to fall under his spell, all felt very realistic, and atmospheric.

But, when it becomes clear that Lev has so mesmerized Zoya that she will do his bidding, no matter how shocking, the story takes on a very different tone. Lev is a manipulator of women, but he’s not the only one capable of manipulation. The women in his life soon learn his art is the best part of him and will take drastic measures to make sure he doesn’t become his own worst enemy by making poor career decisions, which of course, would affect their quality of life. Therefore, an odd triangle forms, the outcome of which, left me stunned.

I was absolutely riveted to this saga, the characters and their motives. I was taken off guard by the conclusion, which, despite the circumstances, made my wicked heart grin. Very clever. Just the kind of dark twist I admire.

But, I would remiss if didn’t mention the writing, which is simply outstanding. Pick this book up for the amazing prose, if for no other reason. But, be prepared for a slow build up, and unpredictable, unlikable characters. Still, the outcome of the story will make the wait well worth it. 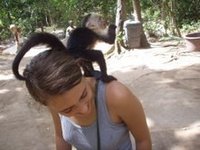 Adrienne Celt is a writer, cartoonist, and avid reader living in Tucson, AZ. Her debut novel THE DAUGHTERS won the 2015 PEN Southwest Book Award and was shortlisted for the 2016 Crawford Award. Her second novel, INVITATION TO A BONFIRE will be published in June 2018.
Winner of a 2016 O. Henry Prize, her short fiction and essays have appeared in Esquire, The Kenyon Review, Epoch, Zyzzyva, Ecotone, The Tin House Open Bar, Prairie Schooner, Electric Literature, The Lit Hub, and many other places. Also a cartoonist, her comics have been published by The Rumpus, The Toast, Bat City Review, Broad! Magazine, The Southeast Review, and other places, as well as appearing on her weekly webcomic: loveamongthelampreys.com. A collection of her comics, APOCALYPSE HOW? AN EXISTENTIAL BESTIARY was published in 2016.
Posted by gpangel at 1:00 AM