Then She Was Gone by Lisa Jewell - Feature and Review THEN
She was fifteen, her mother's
golden girl. She had her whole life ahead of her.
And then, in the blink of an eye, Ellie was gone.
NOW
It’s been ten years since Ellie
disappeared, but Laurel has never given up
hope of finding her daughter.
And then one day a charming and charismatic stranger called Floyd walks into a café and sweeps Laurel off her feet.
Before too long she’s staying the night at this house and being introduced to his nine year old daughter.
Poppy is precocious and pretty - and meeting her completely takes Laurel's breath away.
Because Poppy is the spitting image of Ellie when she was that age.
And now all those unanswered questions that have haunted Laurel come flooding back.
What happened to Ellie? Where did she go?
Who still has secrets to hide?

Then She Was Gone by Lisa Jewell
My rating: 5 of 5 stars

Then She Was Gone by Lisa Jewell is a 2018 Atria Books publication.

Well, this was certainly different!

Missing persons tropes are common in mysteries and thrillers, and the theme has been written and explored in many predictable ways, but also in many clever, even shocking ways. But, no matter how it is presented, it is a scenario that never fails to draw me in. But, I must say, this novel puts an entirely new and fresh spin on the missing persons mystery-

Ellie, a conscientious teenager, and the apple of her mother's eye, left to visit the library and was never seen or heard from again. Laurel, Ellie's mother, couldn’t understand how her other children and her husband were able to move on with their lives without knowing what happened to Ellie. Laurel's life stalled, her marriage fell apart and the relationship with her two remaining children is strained.

But, finally, after years of just going through the motions of life, Laurel meets Floyd, a single dad with a young daughter named Poppy. The connection between Laurel and Floyd is immediate and heady. But, when Laurel finally gets to meet Poppy, she is unnerved by the uncanny resemblance to her daughter, Ellie. She even smells like Ellie, which kicks Laurel's natural maternal instincts into high gear. This and another small coincidence, puts new thoughts into Laurel’s head, prompting her to do a little amateur sleuthing.

She never in a million years could have predicted the shocking revelations her inquiries would uncover or the personal epiphanies that would change Laurel's life forevermore. Is it possible that Laurel could, at long last, find all the answers about her daughter’s disappearance?

This story was very dark, gloomy, and creepy, but also quite emotional and poignant. Laurel's voice is so realististic, raw, and sympathetic, she nearly had me believing she was a real person and that this was a true story. Her emergence from a tortuous state of limbo and her fierce determination to get to the truth, and begin truly living life again was an amazing transformation.

I think Lisa Jewell has written a chilling novel of suspense, but it is also a book about the power of maternal love, forgiveness and healing and never giving up.

This could be Jewel’s first tentative  steps towards advancing up to the literary thriller category. I was impressed with this novel as it held my rapt attention from start to finish. It gave me goosebumps in more ways than one. 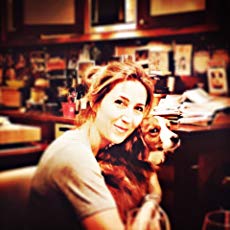 Lisa Jewell was born and raised in north London, where she lives with her husband and two daughters. She is the New York Times, Wall Street Journal, and USA TODAY bestselling author of over twenty novels, including The Girls in the Garden, The House We Grew Up In, and The Third Wife. To find out more, visit Facebook.com/LisaJewellOfficial, or follow her on Twitter @LisaJewellUK
Posted by gpangel at 1:00 AM