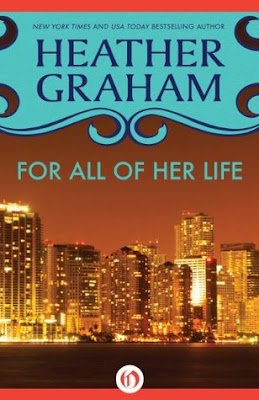 
Sometimes our exes are exactly how we remember them. Sometimes they’re better . . .
Kathy and Jordan Treveryan used to have everything. They fronted the enormously successful rock band Blue Heron, they had two beautiful daughters, and they had a passionate marriage. But life as they knew it came to an abrupt end when their bandmate, Keith, was killed in an apparently accidental fire. Soon after, the band and their marriage fell apart.
In this tale of unstoppable love, Jordan pursues Kathy as he tries to reunite the band and lay to rest the mysterious circumstances of Keith’s death. And while Kathy finds herself torn between her current boyfriend and her lingering feelings for her ex-husband, romance reignites—and the exes may even unravel the truth behind what made them separate so long ago.
This e book features an illustrated biography of Heather Graham, including rare photos from the author’s personal collection.

For All of Her Life by Heather Graham Pozzessere
My rating: 4 of 5 stars

Kathy and Jordon were riding high with the success of their rock band, Blue Heron. They had everything they ever dreamed of- a good marriage, two beautiful daughters, making a living doing what they loved- but then one fateful night, one of their band members perished in a fire. Things were never the same after that. The band broke up- as did Kathy and Jordon.

Now, ten years later, Jordan is trying to get the band back together. He wants Kathy to come to a party he’s having, which will also coincide with their daughter’s birthday. Reluctant at first, Kathy eventually agrees. But, someone is trying to thwart the reunion.

As memories resurface Kathy and Jordon discover their love for each other is still as strong as ever. But, as details about the night of the fire all those years ago begin to slowly emerge, they could find themselves in grave danger.

My first impressions of Heather Graham came from her historical romances, which to this day, I still believe is her strongest suit. However, Graham moved into the contemporary realm and enjoyed some nice success with a string of romantic suspense novels, before she struck just the right chord, at just the right time in the paranormal romance category.

This book was published back in 1995, but Open Road Media has formatted the book in digital format, which as most people know, I am a huge supporter of. Now, these books can find a new audience, while those who lost track of old favorites, or books they have a hard time finding anymore, can enjoy these books all over again.

This story is a fine example of the usual romantic suspense format in the late nineties, but despite its age, it stood up well with the passage of time. The writing style is a little dated, but other than that, it could work just as well today as it did when first published. The dialogue between Jordon and Kathy is not especially sharp, and Kathy’s constant worry about her age bordered on overkill. Still, I loved the chemistry between them, which really sizzled and of course the second chance at love theme is a personal favorite. The suspense is a cut above, and I have to say that while I suspected everyone at one point or another, the killer was mostly a surprise to me. There was a taut, sinister atmosphere from the beginning with some pretty tense moments added in to boot.
The romance and suspense elements are well-balanced, making this book a great textbook example of how to satisfy fans of both genres- something I find many writers of romantic suspense struggle with.

Overall, this was a solid romantic suspense novel. If this book is any indication, I think Graham’s other back-listed titles warrant a closer look.
Note: Zebra has released this book in Paperback and Audio under the title of "Up in Flames" early in 2018 if you would prefer the print edition or would like to add audio.

Heather Graham Pozzessereaka Heather Graham, Shannon DrakeHeather Graham was born on March 15, 1953 and grew up in Dade County, Florida, and attended the University of South Florida at Tampa, majoring in theater arts and touring Europe and parts of Asia and Africa as part of her studies. After college, she acted in dinner theaters, modeled, waitressed, and tended bar. She married Hershey Dennis Possezzere, and after the birth of her third child, she was determined to devote her efforts to her writing: her dream. She sold her first book in 1982.Today, this author's success is reflected not just by reader response and the over 20 million copies of her books in print, but in many other ways. In addition to being a New York Times bestselling author, Heather has received numerous awards for her novels, including over 20 trade awards from magazines such as Romantic Times and Affaire de Coeur, bestseller awards from B. Dalton, Waldenbooks, and BookRak, and several Reviewers' Choice and People's Choice awards.Heather has appeared on Entertainment Tonight, Romantically Speaking, a TV talk show that aired nationwide on the Romance Classics cable channel, and CBS Sunday News. She has been quoted in People and USA Today, been profiled in The Nation, and featured in Good Housekeeping. Her books have been selections for the Doubleday Book Club and the Literary Guild. She has been published across the world in more than 15 languages and has published over 70 titles, including anthologies and short stories.Now, she had five children. Somehow, this prolific author manages to juggle it all - family, career, and marriage - while reaching a level of success to which few can aspire.
Posted by gpangel at 1:00 AM