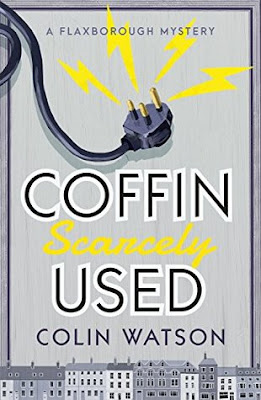 In the respectable seaside town of Flaxborough, the equally respectable councillor Harold Carobleat is laid to rest. Cause of death: pneumonia.
But he is scarcely cold in his coffin before Detective Inspector Purbright, affable and annoyingly polite, must turn out again to examine the death of Carobleat’s neighbour, Marcus Gwill, former prop. of the local rag, the Citizen. This time it looks like foul play, unless a surfeit of marshmallows had led the late and rather unlamented Mr Gwill to commit suicide by electrocution. (‘Power without responsibility’, murmurs Purbright.)
How were the dead men connected, both to each other and to a small but select band of other town worthies? Purbright becomes intrigued by a stream of advertisements Gwill was putting in the Citizen, for some very oddly named antique items…
Witty and a little wicked, Colin Watson’s tales offer a mordantly entertaining cast of characters and laugh-out-loud wordplay.
READ AN EXCERPT:

Coffin Scarcely Used by Colin Watson
My rating: 4 of 5 stars

Coffin Scarcely Used by Colin Watson is a 2018 Farrago publication. (This book was originally published in 1958)

What a wonderful find!!

I am happy this rather obscure mystery series has been rediscovered and propelled into the digital age.

I was unfamiliar with the series, to be honest, and was equal parts excited and skeptical about reading it. Described as a humorous mystery, and published in the fifties, I was worried it might be too silly, or too dated. I’ve also grown a little wary of mysteries or detective novels written back in this era due to extreme sexism. (Which is to be expected to some extent, and I do take the time frame into consideration, but some older titles are just too abusive in one way or another for me to be able to enjoy it.)

However, I needn’t have worried. This mystery/police procedural is an absolute delight!

Small towns are often deceptively wholesome. Flaxborough is a fine example of that. It is a small, sleepy seaside community, quite dignified, but it is hiding a shocking secret.

When a man passes away, the cause of death is barely remarked upon, it certainly didn’t raise any criminal alarms, but when his neighbor dies shortly thereafter, under rather odd circumstances, Detective Inspector Purbright is called in to investigate. What at first appeared to be an unusual way of committing suicide, may have been murder. It’s up to Purbright and Sargent Love to solve the puzzle.

This really is an exceptional mystery novel. It deals with some rather seedy topics without being graphic. In fact, one must read between the lines, since it isn’t stated outright. Still, there were conversations, about other issues that had yet to become hot button topics in the average house hold.

The humor is dry and witty, and the dialogue is razor sharp. This first installment is fairly short, and I easily read it in one sitting. I enjoyed it thoroughly, and once again, I am grateful this series is getting some recognition. Any mystery lover will appreciate this story and will be charmed by Love and Purbright. The ending was phenomenal, and a complete and rather shocking surprise!

I believe there are twelve installments in this series and I sincerely hope all of them will be formatted to digital. I am quite impressed with this little gem and would love to read every book in the series! 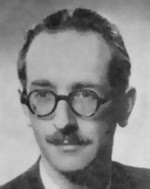 Colin Watson was educated at the Whitgift School in South Croydon, London. During his career as a journalist he worked in London and Newcastle-on-Tyne, where he was a leader-writer for Kemsley Newspapers.His book Hopjoy Was Here (1962) received the Silver Dagger Award. He was married, with three children, and lived in Lincolnshire. After retiring from journalism he designed silver jewellery.As well as a series of humorous detective novels set in the imaginary town of Flaxborough, featuring Inspector Purbright, Watson also wrote and later revised a study of detective stories and thrillers called Snobbery with Violence.