The Outsider by Stephen King- Feature and Review 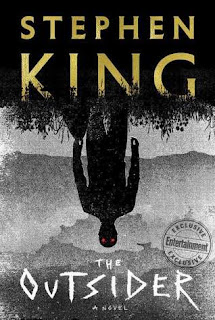 An unspeakable crime. A confounding investigation. At a time when the King brand has never been stronger, he has delivered one of his most unsettling and compulsively readable stories.
An eleven-year-old boy’s violated corpse is found in a town park. Eyewitnesses and fingerprints point unmistakably to one of Flint City’s most popular citizens. He is Terry Maitland, Little League coach, English teacher, husband, and father of two girls. Detective Ralph Anderson, whose son Maitland once coached, orders a quick and very public arrest. Maitland has an alibi, but Anderson and the district attorney soon add DNA evidence to go with the fingerprints and witnesses. Their case seems ironclad.
As the investigation expands and horrifying answers begin to emerge, King’s propulsive story kicks into high gear, generating strong tension and almost unbearable suspense. Terry Maitland seems like a nice guy, but is he wearing another face? When the answer comes, it will shock you as only Stephen King can.

The Outsider by Stephen King
My rating: 5 of 5 stars

The Outsider by Stephen King is a 2018 Scribner publication.

An eleven -year old boy is found brutally murdered and strong evidence points to Little League coach Terry Maitland. Detective Ralph Anderson is particularly outraged and makes the fateful decision to arrest Terry in public, creating a media sensation in the process. But, as the investigation begins to unfold, doubts and alternative evidence make Ralph question Terry’s guilt. As the mystery deepens the horrible truth that emerges creates a heart pounding and tense race against time, and the ultimate good versus evil showdown.

“Reality is thin ice. But most people never fall through until the very end”

Now, plenty of people have reviewed this book, and King certainly doesn’t need any help from me in promoting his novels, I just had to add my own complimentary comments about this one. This book reminded me of why, when I was a teenager, I was always the first in line to buy a new SK novel, why I absorbed them as fast as possible, then read them again and again and again. King has a way of building a complex puzzle, while creating characters readers are sure to respond to, either in a good or a bad way, and then proceeds to scare the crap out of us. The action picks up right at the beginning, building and building, first as a standard mystery and police investigation, then segues into the stuff that will keep you up at night.

King is always funny, always a bit sarcastic, and likes to poke fun here and there, sometimes good naturedly, and sometimes with a more caustic tone, while also addressing serious issues from time to time without becoming preachy. His passages featuring fellow author Harlan Coben, was especially fun and entertaining. (Although, you may want to refrain from asking Coben if he knows who the killer is from the start, or if he figures it out as he goes along- I think that question has been asked and answered, and Coben could be weary of it. 😊)

King’s basic style is still working, is still relevant, avoiding the traps of standard formulas and clichés authors of his generation, who have clogged up the NYT bestseller lists for the past forty years, are prone to. However, as Karin Slaughter points out in her otherwise glowing review for the Washington Post-

“If you can accept that a contemporary man in his late 40s recalls quoting “Our Gang” with his kid brother instead of the Fonz or even Pee-wee Herman, you’re in for a hell of a ride.” LOL!

My only regret is that I did not realize Holly’s character was connected to the Mr. Mercedes trilogy, and I’ve been meaning to read those books for a long time. But, on the plus side, I feel more motivated to get started on it sooner, rather than later.

This book is will remind readers of why Stephen King is the master… and always will be. 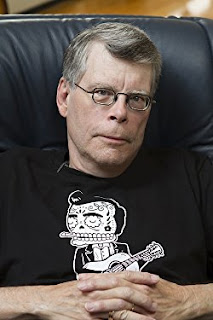 Stephen King is the author of more than fifty books, all of them worldwide bestsellers. His recent work includes The Bill Hodges Trilogy, Revival, and Doctor Sleep. His novel 11/22/63 was named a top ten book of 2011 by The New York Times Book Review and won the Los Angeles Times Book Prize for Mystery/Thriller as well as the Best Hardcover Book Award from the International Thriller Writers Association. He is the recipient of the 2003 National Book Foundation Medal for Distinguished Contribution to American Letters. He lives in Bangor, Maine, with his wife, novelist Tabitha King.
Posted by gpangel at 1:00 AM