FLASHBACK FRIDAY: The Church of Dead Girls by Stephen Dobyns- Feature and Review 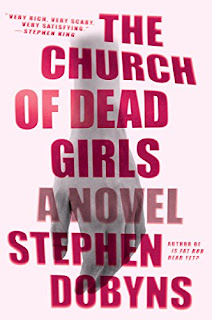 Despite its superficial resemblance to a whodunit, The Church of Dead Girls is not a conventional thriller. Don't expect it to be suspenseful. This is a literary horror tale--slow paced, contemplative, meticulous in its descriptions--about a formerly sleepy small town in which the crucial distinction between public and private life is dissolving as suspicion spreads like a toxin. The reader's guide to this process of corruption is a high school biology teacher--reserved, somewhat snotty, but a thoughtful man, and reliable in spite of his cynicism. He says, "It is dreadful not to be allowed to have secrets. Years ago I happened to uncover a nest of baby moles in the backyard and I watched them writhe miserably in the sunlight. We were like that." Ultimately you realize that the killer's identity, even the deaths of three girls, are small matters compared to the collapse of the town's very soul.

The Church of Dead Girls by Stephen Dobyns
My rating: 5 of 5 stars

I'm not much of a re-reader. But, I actually kept my copy of this book and have read it twice. This is much more a than just a mystery. The way the author builds the suspense as our narrator tells a chilling tale of how a town turns in on itself after a young girl goes missing.
Human nature is explored as people began to eye their neighbors and secrets are brought to light in a small town.
There is a murderer among them and the reader gets sucked into the vortex of the investigation and maybe we even become a little like the town folk ourselves as we suspect first one ,then another.
This is a very absorbing book that should be a part of literature as well as a good old fashioned mystery. Very haunting novel that stays with you after you have finished reading it. Highly recommend! 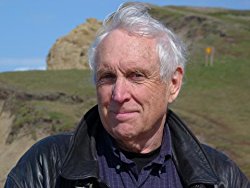 Stephen Dobyns is the author of The Day's Last Light Reddens the Leaves of the Copper Beech (BOA Editions, 2016), as well as 23 novels, 14 books of poetry, two collections of essays, and one book of short stories. Among his many honors and awards are fellowships from the NEA and the Guggenheim Foundation. Throughout his career, Dobyns has worked as a reporter for Detroit News, a reviewer for many prestigious publications, and has taught at numerous academic institutions. He lives in Westerly, Rhode Island.
Posted by gpangel at 1:00 AM