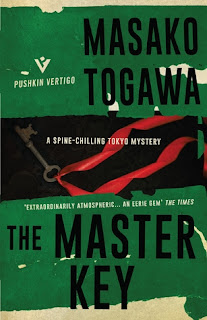 A building full of secrets. A key that will unleash them all.
The K Apartments for Ladies in Tokyo conceals a sinister past behind each door; a woman who has buried a child; a scavenger driven mad by ill-health; a wife mysteriously guarding her late husband’s manuscripts; a talented violinist tortured by her own guilt. The master key, which opens the door to all 150 rooms, links their tangled stories. But now it has been stolen, and dirty tricks are afoot.
For a deadly secret lies buried beneath the building. And when it is revealed, there will be murder.

The Master Key by Masako Togawa


The Master Key by by Masako Togawa, Simon Grove (Translator) is a 2017 by Pushkin Vertigo publication.

Originally published back in 1962, this ‘puzzle’ mystery has been translated into the English Language and is now available in digital format.

Although I consider myself somewhat well versed on mystery novels and the various sub-genres, I wasn’t quite sure what was meant by ‘puzzle mysteries’, which, of course, piqued by interest, on top of the cultural aspects and the vintage/classic angle I’m always a sucker for.
The story is centered around the K apartments for single ladies, which is about to be moved due to the widening of a highway. As the story progresses the past and present slowly merge as the truth behind the death of an infant is revealed amid shocking revelations.

The apartment's master key plays a prominent role in the way these tightly held secrets emerge from the shadowy corners of loneliness, obsession, and sorrow, and the deceptively benign activities transpiring at the K apartments for women.

The story is short, but it packs a big punch. It was almost like reading a group of connected vignettes with the post war backdrop of Tokyo creating a stunning atmosphere. These ‘vignettes’ are all a piece of the puzzle, which gradually comes together, piece by piece, to give the reader the full, entire picture.

Fate! It can stab you in the back any time, upsetting the most carefully thought out activities. Fate doesn't care what the upshot is.

Very clever! The definition of a puzzle mystery is rather vague, but it is supposed to focus on solving the puzzle, without spending a great deal of time on the development of the characters. However, I did get a nice glimpse into the secret lives, and human foibles, of these women, as a tragic story unfolds.

I’ve never read a mystery quite like this one, and the more I pondered on it, the more appreciation I had for the author’s ingenuity. I am very interested in reading more books by Masako Togawa if I can locate any with translations.
I recommend this book to anyone who enjoys mysteries that are a little outside the box, are masterfully written, and keeps you guessing or if you enjoy vintage mysteries. 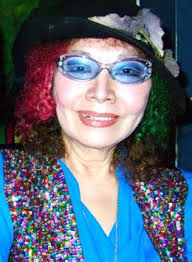 Masako Towaga began writing in 1961, backstage, between her stage appearances, and her first work The Master Key was published a year later, in 1962, for which she was awarded the prestigious  Edogawa Rampo Prize . The story is set in the same apartment she grew up in with her mother. Her second novel, The Lady Killer, followed in 1963, becoming a bestseller. It was adapted for both TV and film, and nominated for the Naoki Prize.
She wrote more than thirty novels and was one of the most popular mystery writers in Japan, with many of her stories based on her own life experience.