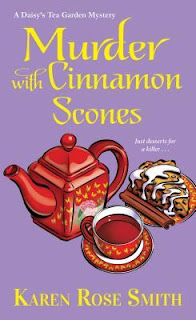 Daisy Swanson and her Aunt Iris run a delightful shop in Pennsylvania’s Amish country with an emphasis on tasty teas and treats—but murder is not so sweet . . .
As local merchants unite to attract tourists for a much anticipated weekend quilting event, business is sure to spill over into eateries like Daisy’s Tea Garden. Gorgeous craftwork is hanging everywhere—but among the quilts, potholders, and placemats, one gallery owner is wrapped up in some dangerous affairs . . .
Reese Masemer had been dating one of Daisy’s employees, Tessa, an artist, though their last interaction was as strained as a cup of loose leaf tea. Now Reese has been found dead near a covered bridge where Tessa’s been practicing her sketches. She’s the obvious suspect, but Daisy’s learning that there were some major secrets in Reese’s background, and several of his relationships were infused with resentment. To save Tessa, she’ll have to find out who’s tainted this quaint little town with murder . . .

Murder with Cinnamon Scones by Karen Rose Smith
My rating: 5 of 5 stars

As the town gears up for the onslaught of tourists expected for a quilting event, Daisy is shocked by the murder of Reese Masemer, the man her good friend, Tess, had been dating. Daisy had no intention of poking her nose into the investigation, but when Tess becomes the primary suspect, she puts on her sleuthing hat once again to keep her friend from being charged with murder.

In the meantime, Daisy is worried her oldest daughter is getting too serious with her new boyfriend, while her own romantic prospect hits a disappointing snag.

This second installment in the ‘Tea Garden Mystery’ series, builds upon a sturdy foundation, becoming more solid and secure as characters develop a bit more and the location becomes more vivid. But, of course, we all showed up for a murder mystery, and this one is a real head scratcher.

This is a series I think I could settle into long term. Daisy is a character I could really grow to love, as she is more ‘mature’, and the issues she copes with are realistic and easy to relate to. I love the supporting cast, and their interesting and compelling relationships. The romance is just little angsty, working on a slow build up, which is nice, as well.

The mystery kept me on my toes and guessing from the start all the way to the nail biting conclusion! I loved the way this story ended, and enjoyed the awesome recipes included with the book. You really must try the cinnamon scones- they are to die for!! 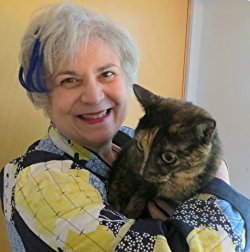 Karen Rose Smith is writing mysteries as well as romances now! Her plots, whether in mystery or romance, are all about relationships.