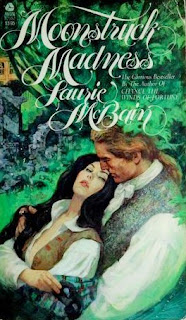 She's one thing by day, something else altogether by night...
After escaping the slaughter of her clan at a young age, Scottish noblewoman Sabrina Verrick provides for her siblings by living a double life, until the night she encounters the Duke, and her secret and all she holds dear is threatened...
He's so disillusioned, he's completely vulnerable...
With his inheritance at stake, Lucien, Duke of Camareigh, sets a trap for the Scottish beauty with the piercing violet eyes, never imagining what will happen when the trap is sprung...
As their lives become irreversibly entangled, Lucien and Sabrina become each other's biggest threat, as well as their only salvation...

Moonstruck Madness by Laurie McBain
My rating: 5 of 5 stars


Moonstruck Madness by Laurie McBain is a 1977 Avon Publication.

I am thrilled to see some of these books are being released in digital format!! However, when I started reading “Chance the Winds of Fortune”, I realized the book was the second in the series. As it happens, I had a vintage copy of this book on my collectable bookshelf, which is even better!!

Written way back in the late 70's, this book might be tossed into the 'bodice ripper' category, but frankly, I didn't feel that way about it. Yes, there are some uncomfortable treatments of women, but despite what many would like to believe, these depictions were accurate and true to the time period.
Other than that, this book is pretty much a standard historical romance for the time frame it was written in.

Sabrina has left her beloved Highlands of Scotland for England with her aunt, sister and young brother. They are not well off, and Sabrina takes part and even devises some dangerous stunts in order to keep her family afloat, until she crosses the Duke of Camareigh, who puts her little enterprise out of business. In order to survive, Sabrina will have to escape her father's plans for her, which leads her right back into the arms of Lucien Dominick.

I loved this story! It's a real classic and is tame enough that modern readers will find it just as enjoyable now as romance lovers did when the book was first published. Sabrina is bold, daring, and a woman who doesn't give up without a fight. I loved her determination, her cleverness, and her fiery passion.

Lucien was absolutely hilarious most of time, as the author depicted him so authentically. He is haughty, arrogant, and manipulative too, but his punishment is having to deal with Sabrina, the love of his life, who always keeps him begging for more.

The secondary characters were also key in this story and give it a very tiny paranormal element as well. There is lots of action, adventure, drama, and emotions in this one, and the writing is simply wonderful. When I read these older books, and find myself swept away , so immersed in another world, never wanting the story to end, I can start to feel a little wistful, wishing there were more books like these being written in present day. Thankfully, a publisher has seen the worthiness of these novels and are reissuing them, breathing new life into them, so that hopefully, a whole new generation will come to love these classics too.

The old paperback version may be hard to find, but one might find it on eBay or Amazon Marketplace, or your favorite paperback swap store.

This book is now available in digital format and is also a part of the Kindle Unlimited program! 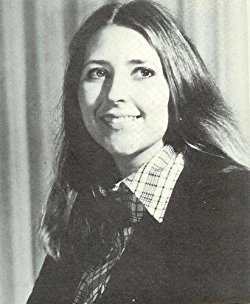 Laurie McBain became a publishing phenomenon at age twenty-six with her first historical romance. She is a winner of the RT Reviewers’ Choice Award for Best Historical Romance Author. All of her romances were bestsellers, selling over 11 million copies.
Posted by gpangel at 1:00 AM