A Well-Timed Murder by Tracee de Hahn- Feature and Review 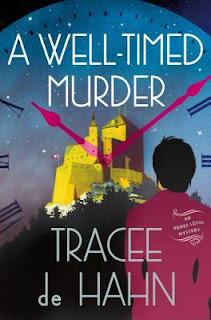 Swiss-American police officer Agnes Lüthi is on leave in Lausanne, Switzerland, recovering from injuries she sustained in her last case, when an old colleague invites her to the world’s premier watch and jewelry trade show at the grand Messe Basel Exhibition Hall. Little does Agnes know, another friend of hers, Julien Vallatton, is at the same trade show―and he’s looking for Agnes. Julien Vallatton was friends with Guy Chavanon, a master of one of Switzerland’s oldest arts: watchmaking. Chavanon died a week ago, and his daughter doesn’t believe his death was accidental. Shortly before he died, Chavanon boasted that he’d discovered a new technique that would revolutionize the watchmaking industry, and she believes he may have been killed for it. Reluctantly, Agnes agrees to investigate his death. But the world of Swiss watchmaking is guarded and secretive, and before she realizes it, Agnes may be walking straight into the path of a killer.
Tracee de Hahn's next mystery, A Well-Timed Murder, is another magnetic mystery that will engross readers from the opening page to the stunning conclusion.

A Well-Timed Murder by Tracee de Hahn
My rating: 4 of 5 stars

A Well Timed Murder by Tracee de Hahn is a 2018 Minotaur Books publication.

This second book in the Agnes Lüthi series, finds Agnes in Lausanne, Switzerland tailing an old adversary, although she is still technically on leave, after sustaining injuries in the line of duty. Surprisingly, she discovers that her friend Julien is also in Lausanne, and that a friend of his recently passed away quite suddenly. Before she knows it, Agnes has found herself embroiled in the case, which by all accounts appeared to be a tragic, accidental death. But, not everyone is convinced of that, which give Agnes a side case to work, before she officially returns to work.

I was very impressed with the first installment of this series and have been eagerly anticipating this follow up. I enjoyed the location, which is a nice change of pace, and I really like Agnes. This story is centered around the Swiss tradition, pride, and reputation of precision watch making. With the possibility of a new breakthrough technology that would revolutionize the industry, it just might be possible Julien’s friend was murdered in order to steal his secrets.

The world of watch making is a fascinating one, and again, this is not a topic that comes up often in mysteries, which is a refreshing change of pace. The mystery has many complexities, and more than one thread that could give an ample motive for murder. As with the first book, this one does not move at a super -fast clip, but builds slowly, which could require a bit of patience for some, but it adds so much depth, deep characterizations, and creates a tantalizing atmosphere the further the mystery deepens.

I didn’t quite connect with Agnes in the same way as I did in the first book, maybe because she doesn’t need my sympathy in quite the same way as before. However, her personal life is still tethered to former husband, via her mother-in-law, with whom she has a complicated relationship. But, the case Agnes catches is so very puzzling, it more than made up for the reduced time spent with Agnes’ profound inner musings.

While the cover of the book might suggest a cozy mystery format, this is pretty much a police procedural and while there is a lack of explicit content, and the language is mostly mild, the mystery almost reminds me of the noir style.

While it is not necessary to read the first book in order to enjoy this one, I do recommend adding to at some point, as it does explain details about Agnes' personal life that will deepen your understanding of her character and enhance your enjoyment of this book. But, all in all, this is an excellent follow up book, very solid, interesting and detailed. I am very much looking forward to Agnes’ next big case!

GET YOUR COPY HERE:
https://www.amazon.com/Well-Timed-Murder-Agnes-Mystery-Mysteries-ebook/dp/B073TSWJMJ/ 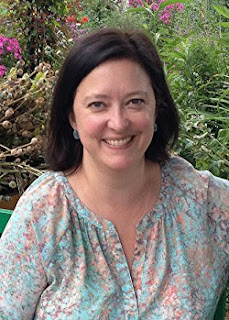 Tracee de Hahn is the author of the Agnes Lüthi Mysteries published by St. Martin’s Press/Minotaur Books. The first in the series, SWISS VENDETTA, was inspired by the 2005 ice storm that ravaged Geneva. The second, A WELL-TIMED MURDER, releases 6 February 2018 and finds Inspector Lüthi at the world's premier watch and jewelry show, Baselworld. When a master watchmaker dies Agnes finds herself deep in the guarded and secretive world of Swiss watchmaking. Tracee was born in Cape Girardeau, Missouri and spent most of her youth in Kentucky. After receiving degrees in Architecture and European history from the University of Kentucky she moved to Switzerland with her husband. Currently they and their two Jack Russell terriers live in Virginia. Find out more about Tracee and the Agnes Lüthi Mysteries on her official website: Traceedehahn.com, on Facebook at TraceedeHahnwriter, on Twitter @LuthiMysteries, on Pinterest at The Agnes Lüthi Mysteries and on Instagram at TraceedeHahn.
Posted by gpangel at 1:00 AM