The Girl on the Velvet Swing: Sex, Murder, and Madness at the Dawn of the Twentieth Century by Simon Baatz- Feature and Review 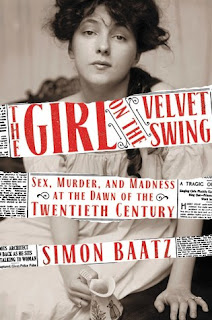 From New York Times bestselling author Simon Baatz, the first comprehensive account of the murder that shocked the world.
In 1901 Evelyn Nesbit, a chorus girl in the musical Florodora,dined alone with the architect Stanford White in his townhouse on 24th Street in New York. Nesbit, just sixteen years old, had recently moved to the city. White was forty-seven and a principal in the prominent architectural firm McKim, Mead & White. As the foremost architect of his day, he was a celebrity, responsible for designing countless landmark buildings in Manhattan. That evening, after drinking champagne, Nesbit lost consciousness and awoke to find herself naked in bed with White. Telltale spots of blood on the bed sheets told her that White had raped her.
She told no one about the rape until, several years later, she confided in Harry Thaw, the millionaire playboy who would later become her husband. Thaw, thirsting for revenge, shot and killed White in 1906 before hundreds of theatergoers during a performance in Madison Square Garden, a building that White had designed.
The trial was a sensation that gripped the nation. Most Americans agreed with Thaw that he had been justified in killing White, but the district attorney expected to send him to the electric chair. Evelyn Nesbit's testimony was so explicit and shocking that Theodore Roosevelt himself called on the newspapers not to print it verbatim. The murder of White cast a long shadow: Harry Thaw later attempted suicide, and Evelyn Nesbit struggled for many years to escape an addiction to cocaine. The Girl on the Velvet Swing, a tale of glamour, excess, and danger, is an immersive, fascinating look at an America dominated by men of outsize fortunes and by the the women who were their victims.

The Girl on the Velvet Swing: Sex, Murder, and Madness at the Dawn of the Twentieth Century by Simon Baatz
My rating: 4 of 5 stars

The Girl on the Velvet Swing: Sex, Murder and Madness at the turn of the Twentieth Century by Simon Baatz is a 2018 Mulholland publication.

What an incredible true story!

‘These crimes, worse than murder, must be avenged. That there are men of large wealth in this city who have made it a business to degrade womanhood- backing plays and players and using art studios to procure poor young girls… is a new revelation to the public: a new story that wealth has turned its rotting force to the corruption of innocent girlhood, whose misfortune is poverty.”

Sounds eerily familiar to current events, but this story for all intents and purposes begins in 1901, when sixteen-year old actress, Evelyn Nesbit, finds herself wined and dined by one of New York’s premiere architects, Stanford White, a much older man.

One night, Stanford finally got the young beauty alone, plied her with alcohol, possibly adding something extra to her champagne.

Evelyn woke up in White’s bed, naked, obviously having been taken advantage of. She never spoke of it, and even continued what appeared to be a mutual friendship with White.

But, when Evelyn caught wealthy Harry Thaw’s attention, the two became inseparable, despite the dark rumors surrounding Harry. However, when Harry proposed, Evelyn demurred until he finally coaxed her into confessing that Stanford White had raped her.

Harry and Evelyn did marry, but Harry became obsessed with White, and what he had done to Evelyn. Fuming with rage, Harry shot and killed Stanford White in front of a crowd of theatre goers. 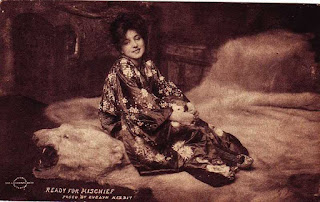 Thus, began a long legal battle where Evelyn was forced to publicly testify to what happened that fateful night with Stanford White, which was so shocking even Theodore Roosevelt implored the press to refrain from printing her testimony verbatim.

However, the bulk of the book is centered around the long legal battle Harry Thaw waged in the attempt to avoid both prison and the mental institution.

.
I was completely unaware of this case. I can see how it captivated the public as I too was absolutely amazed at the many shocking twist and turns the case took, before Harry Thaw's final verdit was announced, years later. It was the ‘crime of the century’ of its time and morphed into the ‘trial of the century'. It was eventually the basis for a movie made in 1955 starring Joan Collins.

While the details of the case caused a huge sensation, and understandably held the public spellbound, the lurid rumors about Harry were not common knowledge at the time. The public seemed very sympathetic towards Harry, who as they saw it, killed the man who raped his wife.

But, for me, what I found so interesting was all the legal wrangling that decided Harry’s fate, and how that decision caused even more complications years later. Harry was really an enigma, a man who did indeed appear to be demented, but was also crazy like a fox. Some may find the legalities and trials dull by comparison to all the other shocking elements of the crime, but I’ve always enjoyed the legal dramas, which is something we rarely these days.

Evelyn’s story is equally compelling, and there is much mystery surrounding her, as well. What was the truth? I believe her story was sincere, not something made up to cover for Harry, which has been suggested. Although there are large chucks of this book dedicated to the trials, mental stability, apprehension, and future of Harry Thaw, it was Evelyn and all that she endured, and the way her life played out post trial that haunted me.


There are a few issues I feel could hamper the reading experience with this book. Sadly, the author had to piece events together in an unconventional way, which had direct consequences when it came to the organization of facts and the fluidity of the writing.

Many readers have become spoiled to true crime stories that read more like a novel. Unfortunately, this book does not have that smooth quality, and as a result some readers will no doubt find areas of the book tedious, as though reading dry history from a text book.

However, because I was completely unfamiliar with these events, the book held my interest from start to finish. I thought it was a pretty wild ride and the outcome left me shaking my head.

Naturally, I couldn’t help but notice that despite the era of time in which these events took place, there are stunning parallels to current headlines, concerning men of wealth and power, taking advantage of women, which is disturbing on so many levels!!

I didn't search this book out due to recommendations or promotions. I simply stumbled across it in my Overdrive library, thought it sounded interesting and checked it out on impulse. I'm glad now that I did!

If you enjoy reading history or true crime you will want to check this book out. 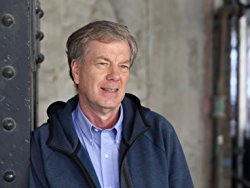 Simon Baatz was born in London and studied at the University of York and Imperial College London. He first came to the United States for graduate work in the history of science at the University of Pennsylvania and he subsequently taught United States history at George Mason University in northern Virginia.
His most recent book, THE GIRL ON THE VELVET SWING, was published on January 16, 2018 by Mulholland Books, an imprint of Little, Brown & Co.
Principato-Young Entertainment, a film and television production company based in Beverly Hills, has optioned his previous book, FOR THE THRILL OF IT, a history of the Leopold-Loeb case. FOR THE THRILL OF IT, a New York Times bestseller, was a finalist for the Edgar Allan Poe Award.
Simon has lived in Tokyo, Frankfurt am Main, and Washington DC and he now teaches American legal history at John Jay College, City University of New York.
Posted by gpangel at 1:00 AM