Here we Lie by Paula Treick DeBoard- Feature and Review 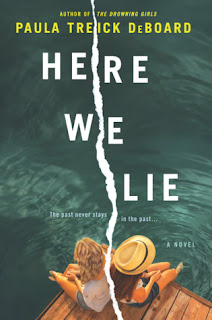 A riveting novel about how the past never stays in the past, from the critically acclaimed author of The Drowning Girls and The Mourning Hours .
Megan Mazeros and Lauren Mabrey are complete opposites on paper. Megan is a girl from a modest Midwest background, and Lauren is the daughter of a senator from an esteemed New England family. But in 1999, Megan and Lauren become college roommates and, as two young women struggling to find their place on campus, they forge a strong, albeit unlikely, friendship. The two quickly become inseparable, sharing clothes, advice and their most intimate secrets.
The summer before their senior year, Megan joins Lauren and her family on their private island off the coast of Maine. The weeks go by, filled with fun and relaxation, until late one night at the end of the vacation, something unspeakable happens, searing through the framework of the girls' friendship and tearing them apart. Many years later, in the midst of a political scandal, Megan finally comes forward about what happened that fateful night, revealing a horrible truth about Lauren's family and threatening to expose their long-buried secrets.
In this captivating and moving novel of domestic suspense, Paula Treick DeBoard explores the power of friendship and secrets and shows how betrayal can lead to disastrous, and deadly, consequences.

Here We Lie by Paula Treick DeBoard
My rating: 4 of 5 stars

Here we Lie by Paula Treick DeBoard is a 2018 Park Row Books publication.


A timely topic mingled with a bittersweet ode to friendship-

Megan Mazeros and Lauren Mabrey come from entirely different backgrounds, but when they end up being college roommates, in the late 1990s, the unlikely pair forge a strong bond.

But, when Megan is invited to spend the summer with Lauren at her family’s private retreat, something happens that forces a wedge between the two girls and their friendship never fully recovered.

Now, Megan is married, having put that summer and Lauren out her mind all these years, until a startling news report regarding a serious allegation against a member of Lauren’s family brings the past sharply into focus. After a flood of memories overwhelms her, Megan knows she can’t stay quiet. She must come forward with her story, forcing her to reveal long buried secrets and shocking, undeniable truths to herself, her family, and the world.


The subject matter at the center of the story is so timely and the scenario is so familiar, so plausible, this story could make tomorrow’s headlines and we’d believe it was a real news story.

The events surrounding the summer of 1999 may be the center of the story, but the heart of the story is about a friendship that manages to survive against incredible odds.


This review has been a difficult one to write, not just because this is an uncomfortable topic, because it happens to be very, very important to me, and I am quite vocal about it on social media, but mainly I’m worried about giving too much away. But, I must say, I think the author did a terrific job of laying out all the angles and complexities without passing judgement on the characters for their decisions and choices.

I also don’t’ want to get preachy about victim blaming, or lecture on spouting platitudes about not facing adversity head on. I think enduring something that traumatic, in a situation where you feel especially powerless and vulnerable, with added emotional connections, could make facing things ‘head-on’ a thing that is easier said than done. Sometimes the mind is so stunned and shocked, the only way to cope is to the bury things deep in the subconscious mind until we are strong enough to face it, to admit it, to deal with it. Not only that, we should all know by now there are many psychological reasons behind these actions, as well as the threats demanding silence, and the disbelief and monumental scrutiny one will most certainly face.

Yet, I am of a mind that you should never keep quiet. Run- don’t walk- speak up and speak out- immediately!! Your voice just might be the one that gives someone else the courage they need to do the right thing and you may prevent someone else from becoming a 'survivor'.

This book highlights the plethora of complexities of situations like this one, adding areas of gray, blurred lines, and the difficulties of calling out men of power. This book could open up a much- needed discussion on this issue, perhaps making it a good book club selection.

But, at the end of the day, the book is also about the mysterious bonds of friendship. Lauren and Megan’s relationship had a rocky foundation, was built on lies and misrepresentations, and both girls are deeply flawed in their own way.

However, once you strip away all the complications that got in the way, the friendship was sincere and legitimate at its core, which gives the book a positive spin, rather than one that leaves you feeling angry or hopeless.

Overall, this is a compelling novel, a cautionary tale, and one that addresses the need to be more informed, educated, less judgmental and a whole lot more supportive of those who come forward, no matter when they find the courage and strength to do so. Maybe this would make it easier for more people to speak up, hopefully sooner, rather than later. 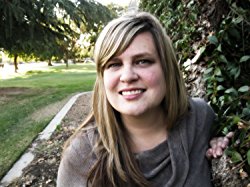 Paula Treick DeBoard is a writer, latte drinker and all-around slave to public education. Her first novels—written in the back seat of a 1977 Chevy Caprice station wagon where her parents let her jostle around, unprotected by a seatbelt—were sadly lost in one cross-country move or another. After earning a BA in English from Dordt College in 1998, Paula thought, “I’ll teach high school during the week and write fiction on weekends,” a delusion which persisted for a decade, during which time she wrote exactly one short story. In 2010, she earned an MFA in Fiction from the University of Southern Maine and discovered a passion for staring at a laptop screen for long hours. Paula’s short fiction has appeared in The Sycamore Review, deCOMP, Cantaraville and The Shine Journal. Occasionally, her work has appeared in venues that have later closed—although surely this is only a coincidence.These days, Paula splits her time between teaching (at the University of California, Merced) and writing. Her novels are The Mourning Hours, The Fragile World and The Drowning Girls (April 2016). Her heart—and any remaining spare time—belongs to Will and their four-legged brood.
Posted by gpangel at 1:00 AM