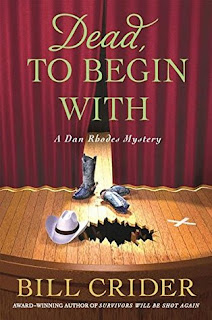 In Clearview, Texas, a wealthy recluse has joined the community and is leading the restoration of an old opera house. When he falls to his death, Sheriff Dan Rhodes suspects that he’s been murdered, but there doesn’t seem to be a motive. Who would want to kill someone who’s helping the town and hasn’t been around long enough to make any enemies?

The Sheriff’s suspicion proves to be true, however, and he begins to look for motives buried in the past, meanwhile having to deal with people fighting over baseball cards at a yard sale, writers who want to talk to him about his sex life, and the Clearview Ghost Hunters, headed up by Seepy Benton, who believes that the old theater is haunted. Clearview might be a small town, but there’s no shortage of excitement.

Dead, to Begin With by Bill Crider
My rating: 5 of 5 stars

Dead,to Begin With by Bill Crider is a 2017 Minotaur Books publication.

Jake Marley, the town recluse, falls to his death in the old movie theatre he was having restored. After many years of living in wealthy solitude, Jake had begun living his life again, mingling with the town’s residents and even bought the old movie theatre, hoping to restore it for future live performances.

Something about the way the body was found, makes Sheriff Dan Rhodes wonder if Jake’s fall was really an accident. Could Jake have been murdered? If so, why would anyone want to kill Jake, a man most people barely even knew?

I am a late comer to this series, having stumbled across it a few years ago, quite by accident. I remember feeling cheated because it took me so long to discover it.

For the life of me, I don’t know how I missed it, since I am partial to Texas authors and Texas settings. But, better late than never! (I have a long, rambling personal story I’ll share at the end of this review about Bill and his penchant for Dr. Pepper, which endeared me to him all the more)

This series is so funny, and the mysteries are always compelling and imaginative. The characters are quirky, with witty dialogue, which always paints a sly portrait of human nature, combined within a charming, cozy, small town atmosphere.

As always, the mystery is very puzzling, as the victim was virtually a stranger within the community making it difficult for Dan to settle on a motive, until he learns the victim had a sister who died in a mysterious one vehicle crash many years ago. Could there be a connection?

Meanwhile, the ghost hunters are still out in full force, convinced the old theatre is haunted, while Dan does his level best to convince himself he doesn’t believe in ghosts.

The play Jake was planning on sponsoring, once the theatre was fully restored, was ‘A Christmas Carol’, which made for a few thought provoking comparisons between the ghost ‘Jacob Marley’ and Jake Marley, the murder victim. Weaving the Dickens tale around the mystery and the suspects was quite clever and very well done.

I was also thankful that Dan finally gave in and succumbed to his Dr. Pepper urges, and rediscovered his enjoyment of it, even though it wasn’t made with pure cane sugar.

This is yet another very well written, laugh out loud funny, immensely entertaining Dan Rhodes mystery!!

As I said, I only discovered this series a few years ago, and no, I haven’t gotten around to reading all the installments, although I do want to someday. After I read one of Bill’s Dan Rhodes mysteries, I was so surprised to see that Dan was a huge fan of Dublin Dr. Pepper. For those not from Texas, who are not aware of the lore surrounding the infamous Dublin Dr. Pepper, it was the oldest Dr. Pepper bottling company, located in a very small town, eleven miles down the road from me. They bottled Dr. Pepper made with pure cane sugar, using a special secret recipe. It was so wildly popular people drove from all over to tour the bottling plant, and would ‘bootleg’ entire cases of it to take back home with them.

As, it so happens, when my son was in high school, he worked for the bottling company, which only had about ten employees. He loved his job, and the people he worked with were like family. Unfortunately, there was a big war between the small town independent bottler and the big, bad corporate Dr. Pepper Company who wanted to buy them out. Most people never really knew the whole story, but at the end of the day, the plant closed, and my son lost his job- (although he was one of the only employees who has continued to work for Dr. Pepper/Snapple, and has moved up the ladder while putting himself through college.)

Still, it was hilarious when I saw that Dan was boycotting Dr. Pepper because they closed the Dublin plant. I secretly cheered him on, understanding his outrage over the corporate bullying.

In the meantime, I hopped over to Bill’s Facebook page, hoping to keep apprised of all his book releases and what not. I ended up following his posts religiously, especially after he adopted three abandoned kittens, he dubbed the VBK’s – Very Bad Kitties. He posted pictures of them almost daily, so his friends, family and fans were able to watch them grow up. When Bill announced he had cancer, those sweet angels were obviously a great comfort to him and brightened his days, as they did mine.

Sadly,  Bill passed away in February.  His VBK’s are with his Goddaughter now, who has started a FB page just for the kitties, so we will be able to follow them on to their next adventure.

I don’t know if there are any unpublished Dan Rhodes mysteries yet to be released, or if someone will pick this series up at some point, but as far as I can tell, this very well could be the last book in the series. I am glad I found this series, found Bill’s Facebook page, and met his sweet kitties, and felt like I had a personal connection to him and his novels. I do have a nice pile of backlist titles in the series to read, which will be a bittersweet treat, and I will savor every single one of them.

Bill seemed like such a nice, down to earth guy. My thoughts and prayers are with his family at this difficult time, and although I know Bill never got to see this review,  I do want to thank him for creating these wonderful characters and for the hours of entertainment he gave to so many people over the years. 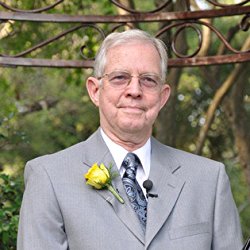 Bill was born and brought up in Mexia (that's pronounced Muh-HAY-uh by the natives), Texas, went to college at The University of Texas and North Texas State University, and taught high school and college classes for many years. In 2002 he retired as Chair of the Division of English and Fine Arts at Alvin Community College, in Alvin, Texas.

He was the author of the Professor Sally Good and the Carl Burns mysteries, the Sheriff Dan Rhodes series, the Truman Smith P.I. series, and wrote three books in the Stone: M.I.A Hunter series under the pseudonym "Jack Buchanan". He was also the writer of several westerns and horror novels.
Posted by gpangel at 1:00 AM