The Paris Spy by Susan Elia MacNeal- Feature and Review 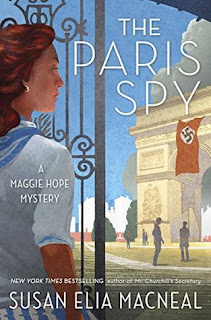 Maggie Hope has come a long way since serving as a typist for Winston Churchill. Now she’s working undercover for the Special Operations Executive in the elegant but eerily silent city of Paris, where SS officers prowl the streets in their Mercedes and the Ritz is draped with swastika banners. Walking among the enemy is tense and terrifying, and even though she’s disguised in chic Chanel, Maggie can’t help longing for home.
But her missions come first. Maggie’s half sister, Elise, has disappeared after being saved from a concentration camp, and Maggie is desperate to find her—that is, if Elise even wants to be found. Equally urgent, Churchill is planning the Allied invasion of France, and SOE agent Erica Calvert has been captured, the whereabouts of her vital research regarding Normandy unknown. Maggie must risk her life to penetrate powerful circles and employ all her talents for deception and spycraft to root out a traitor, find her sister, and locate the reports crucial to planning D-Day in a deadly game of wits with the Nazi intelligence elite.

The Paris Spy by Susan Elia MacNeal
My rating: 5 of 5 stars

The Paris Spy by Susan Elia MacNeal is a 2017 Bantam publication.


I admit I have been hoarding this book. I read the first six in rapid succession, but when I realized I only had one left and there could be a long wait before book eight, I decided to hold on to this one a little while. But, my willpower gave out- LOL!

When we last touched base with Maggie, she was headed to France with fellow SOE agents Hugh and Sarah. After a dull and dreary waiting period, she finally assumes her new identity and moves to the Ritz where she meets the infamous Coco Chanel. But, big trouble is brewing, and Maggie is desperate to find a SOE member she’s lost contact with and of course she’s still holding out hope that she might locate her sister.

Intrigue is a constant hallmark of this series, with each installment becoming more and more intense as the world war becomes increasingly brutal and people have begun to sacrifice integrity for victory at any cost.

This episode is a real nail biter! There is a lot going on, as always, and Maggie must be sharper than ever to keep from being found out. There are a few gut wrenching developments, but also some rays of hope where Maggie’s sister is concerned.

I was on the edge of my seat for the last quarter of the book! It was action packed, emotionally draining, and unbearably suspenseful!!

The ending is the only gripe I have because it is a serious cliffhanger and I will have to wait all the way until August to find out what happens next! UGH!!

However, I am positive it will be well worth the wait!! 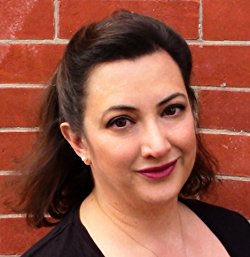 The next book in the Maggie Hope series, THE PRISONER N THE CASTLE, is scheduled to be published on August 7, 2018.Susan Elia MacNeal is the author of The New York Times, Washington Post, Publishers Weekly and USA Today-bestselling Maggie Hope mystery series, starting with the Edgar Award-nominated and Barry Award-winning MR. CHURCHILL'S SECRETARY, which is now in its 22nd printing. She is currently at work on THE PRISONER IN THE CASTLE, the eighth novel in the series.
Posted by gpangel at 1:00 AM