MONDAY'S MUSICAL MOMENTS: Uncommon People: The Rise and Fall of the Rock Star- by David Hepworth 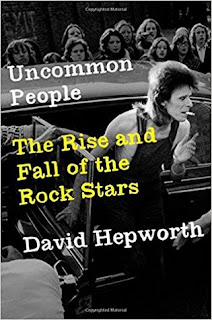 What did we see in them? Swagger. Recklessness. Sexual charisma. Damn-the-torpedoes self-belief. A certain way of carrying themselves. Good hair. Interesting shoes. Talent we wished we had.

What did we want of them? To be larger than life but also like us. To live out their songs. To stay young forever. No wonder many didn’t stay the course.

In Uncommon People, David Hepworth zeroes in on defining moments and turning points in the lives of forty rock stars from 1955 to 1995, taking us on a journey to burst a hundred myths and create a hundred more.

As this tribe of uniquely motivated nobodies went about turning themselves into the ultimate somebodies, they also shaped us, our real lives and our fantasies. Uncommon People isn’t just their story. It’s ours as well.

Uncommon People: The Rise and Fall of the Rock Stars -1955- 1994 by David Hepworth is a 2018 Transworld Digital publication.

A nostalgic, historical homage to the innovators, artists, writers, performers, and musicianship that created the great rock star mystique.

The title of the book had me wondering which kind of approach the author would take in relaying the meteoric rise of the rock star and what his thoughts would be on what brought about their swan dive back down to earth, where they must now walk among us mere mortals.

While the book didn’t exactly read quite like I would have imagined, this book ended up being a nice nostalgic look back at the history, not of rock music, but of rock stars.

I was pleased, so very pleased, with the author’s approach to rock’s beginnings by making his first featured artist Little Richard, and not Elvis. The blues, of course, is where rock originates, but once it was firmly rooted, during the fifties, the British Invasion changed the landscape and opened the doors for a wave of creativity that touched the pulse of a generation, skyrocketing the influence, power, and prestige of the rock star into the stratosphere, turning them into otherworldly beings riding high at the top of the world for decades to come.

The author touches on the psychology of the rock star, how groups like The Rolling Stones found themselves mingling with glamorous movie stars, how stars like Bowie created on stage ‘characters’ like ‘Ziggy Stardust’ and how outright worship of these stars, helped create the rich, lucrative market rock music eventually succumbed to.

But, mostly, this book was an homage, where the author picked the game changers, the most creative, the most influential, and successful, for either their cult followings, or innovations, or longevity. Obviously, The Beatles, The Stones, Jim Morrison, Black Sabbath, Fleetwood Mac, Elton John, and Bruce Springsteen are profiled, as are others who made the biggest impact as musicians and artists.

At the end of each chapter the author includes a playlist for the year just discussed, which was fun and reminded me of some great tunes and artists I had not listened to in a long while.

I do wish the book had touched on the corporate influence and its role in rock’s demise, which is where, looking back through this book you can really see the cracks in the veneer start to show. I have reflected over the years on the power and fascination we allowed rock musicians to hold over us. As I got older I felt it got a little out of control, especially when rock stars began meeting with presidents to discuss policies or special interests. But, I digress.

Everyone’s popularity was judged by how they might compare to rock stars. I remember years back proclaiming ‘authors are my rock stars’, as a way of expressing my complete loyalty to books and writers in a way people would relate to. Somewhere along the way, rock stars became the measuring stick by which we judged the impact of someone’s popularity, almost to point where it became of parody. The ultimate breakdown coming after corporate rock settled in, and with MTV, and the oversaturation of hair metal bands. But, then Kurt Cobain barged onto the scene pounding all that over produced glitz into the ground, which was a good sign. But then...

Some may argue this point, but I won’t be swayed- Kurt Cobain was the last rock star. No one else since, has had that kind of influence or impact on a generation. With his death, hip hop gained a strong hold, and along with the internet, cell phones, and social media stripping away the last vestiges of mystique, we are left only with those surviving artists who paid their dues, and still pack auditoriums and stadiums. When they are gone there will be no one there to pass the torch, no one who will ever cast that kind of spell, weave that sort of magic over people, nor will anyone experience that stronghold of power to last for generations like the Stones or Springsteen. We already know all there is to know about the artist of today, which has weakened their influence, and will most assuredly shorten the length of their massive popularity.


I didn’t really learn anything new by reading this book. As a person who grew up in the pitch perfect awesomeness of rock music in the seventies and eighties, I pretty much knew everything the author shared about the artists, their music and the way the public responded to it. But, it was fun looking back over rock history, the trends, the pitfalls, the imagination and creativity, the fantastic writing, and stage shows, and how much it all meant to their audiences and the way the people responded to them. Mostly, the author stuck with the legends, names easily recognizable, and explained why they were influential, aka controversial, and what part they played in creating the rock mystique. There were a few groups or individual artists I might have added because they were cultural phenoms, or I might have thought twice about featuring an artist that was more of a pop singer than a rock star, but overall, the author chose his subjects wisely and I agreed that these artists were the ultimate trailblazers, true rock stars, a part of an unstoppable force, and will at least leave behind a lasting legacy.

This book did remind me of all the good times I spent with friends, listening to albums, holding long, meaningful conversations about our favorite bands, the instruments they played, the meaning behind the lyrics, debating the which songs were the best,  what were the best album covers, best guitar player, and best stage shows, and all the rest. The music meant something to us, these stars were idols to us, more than they should have been, perhaps, but they held court majestically, and it was through them and their bravery, we found an outlet to express our individuality, our ideas, rebellion, and creativity, and they urged us to stand for something, to work for what we wanted, to question the answers, to have fun, to love and accept. They started fashion trends, music trends, influenced movies and television, as well as social issues and politics, and never ever shied away from controversy.

Long live rock and roll- and the stars who made it great. 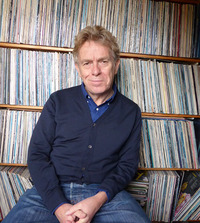 David Hepworth is a music journalist, writer, and publishing industry analyst who has launched several successful British magazines, including Smash Hits, Q, Mojo and The Word, among many others. He presented the definitive BBC rock music program Whistle Test and anchored the BBC's coverage of Live Aid in 1985. He has won the Editor of the Year and Writer of the Year awards from the Professional Publishers Association and the Mark Boxer Award from the British Society of Magazine Editors. He is the radio columnist for the Saturday Guardian and a regular media correspondent for the newspaper.