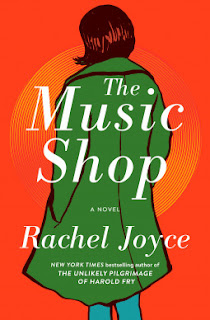 It is 1988. On a dead-end street in a run-down suburb there is a music shop that stands small and brightly lit, jam-packed with records of every kind. Like a beacon, the shop attracts the lonely, the sleepless, and the adrift; Frank, the shop’s owner, has a way of connecting his customers with just the piece of music they need. Then, one day, into his shop comes a beautiful young woman, Ilse Brauchmann, who asks Frank to teach her about music. Terrified of real closeness, Frank feels compelled to turn and run, yet he is drawn to this strangely still, mysterious woman with eyes as black as vinyl. But Ilse is not what she seems, and Frank has old wounds that threaten to reopen, as well as a past it seems he will never leave behind. Can a man who is so in tune with other people’s needs be so incapable of connecting with the one person who might save him? The journey that these two quirky, wonderful characters make in order to overcome their emotional baggage speaks to the healing power of music—and love—in this poignant, ultimately joyful work of fiction.

The Music Shop: A Novel by Rachel Joyce
My rating: 4 of 5 stars

The Music Shop by Rachel Joyce is a 2018 Random House publication.

A quirky, but sweet love story wrapped inside a loving ode to music-


I love stories like this one where a group of people, from various walks of life, all of whom are misfits or eccentric in one way or another, but are kind and giving souls, converge to create a delightful and unique tale of friendship and love.

The music shop is the absolute perfect backdrop for such a story, reminding us of how important a role music, of all kinds, plays in our lives.

The story is set in the mid-eighties, in London, where Frank has set up an indie music shop, in a neighborhood struggling to survive in rapidly changing times.

As the story opens, we watch in fascinated awe as Frank shows off his unique talent of choosing just the right song for his customers, even if they are initially skeptical. He is never wrong and wins the utmost respect of his clients, who have discovered artists and songs they never would have otherwise, thanks to Frank.


But, an ominous threat is hanging over Frank’s shop- CD’s. While vinyl is being aggressively shoved out of the way in favor of compact discs, Frank steadfastly refuses to sell them. He pays a high cost for his stubbornness as fewer people will work with him or they charge him more money for their products.

But, life will turn on a dime, when a woman faints in front of his shop. Her name is Ilse Brauchmann, and she cast an uneasy charm on Frank, his shop, and in fact the entire neighborhood.

From here, the reader will watch as Frank and Ilse form a wobbly relationship that slowly develops into something much more substantial. But, despite the sincerity and strength of those feelings, old abuses and disappointments may stymie their development and growth. Can they admit their feelings for each other or will unforeseen circumstance tear them apart for good?

Movies often release soundtracks, so why can’t we do the same with books? How cool would that be? This book has a definitive musical backdrop that would make a great addition to anyone’s playlist, especially if you love the eighties. The music fit perfectly alongside the eccentric, damaged, and wounded souls in this story, who fight on moral grounds, who were like a family, despite their eccentricities.

Some people adapt and change with the times, accepting the inevitable, while others fight against it with nobility, even if it ends up in futility. Yet, there are occasions, despite the odds, they still manage to carve out a niche for themselves, never having to sacrifice their own convictions.

Frank was like that, and I admired his tenacity, in standing up to corporate pressure the way he did.

I loved all the characters featured in this story, all of whom were flawed in some way, all with heavy burdens to bear, making it easy to sympathize with them. While the story has that oddball quirkiness to it, that whimsical and nostalgic quality that feels so charming, wry humor and a few laugh out loud moments, there is a dark undertone to the story, that our brain acknowledges, but it is so offset by the tone, the bark feels worse than the bite, but it hangs in the air like a thundercloud that refuses to dissipate. It does seem to take an inordinately long time before the sun finally pokes through those clouds.

There was one issue I had with the story, which was the whiplash inducing slamming on of the brakes to one section of the story, disrupting the continuity- which left me feeling disoriented for a time. The momentum that had steadily climbed to that climactic moment, almost tanked. I felt like I had lost something significant in that vacuum of time. The warp speed of the last quarter of the book almost choked the life out of the hard- earned love and fragile emotions the reader had steadily built up to that point.

However, the story did rally in a come from behind win, earning some redemption points with a sweet and tender conclusion that left me with all the warm and fuzzy feels.

Ultimately, this is an offbeat, feel good story, and heaven knows we could all use more of those!! 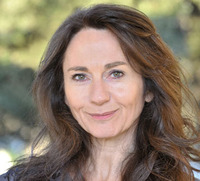 Rachel Joyce has written over 20 original afternoon plays for BBC Radio 4, and major adaptations for both the Classic Series, Woman's Hour and also a TV drama adaptation for BBC 2. In 2007 she won the Tinniswood Award for best radio play. She moved to writing after a twenty-year career in theatre and television, performing leading roles for the RSC, the Royal National Theatre, The Royal Court, and Cheek by Jowl, winning a Time Out Best Actress award and the Sony Silver.
Posted by gpangel at 1:00 AM