FLASHBACK FRIDAY- Winnie-the-Pooh (Vol.1) by A. A. Milne- Feature and Review 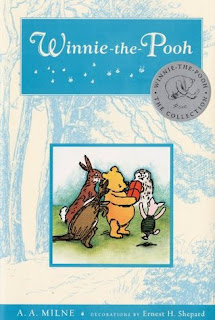 ABOUT THE BOOK:
The adventures of Pooh and Piglet, Kanga and tiny Roo, Owl, Rabbit, and the ever doleful Eeyore are timeless treasures of childhood. In this beautiful edition of Winnie-the-Pooh, each of Ernest H. Shepard's beloved original illustrations has been meticulously hand painted. Bright in color and elegant in design, this lovely volume of Milne's classic tales welcomes friends old and new into the most enchanted of places, the Hundred Acre Wood.

Winnie the Pooh by A.A. Milne

Winnie-the-Pooh by A.A. Milne was my favorite book series as a child. Later, when my own kids sat listening to the adventures of Christopher Robin, Pooh Bear, Piglet, and Eeyore, and the gang, it was a little bit of a shock to discover this series, with its charming stories, are not just for kids.

A little Consideration, a little Thought for Others, makes all the difference

I enjoyed sharing these stories with my own children, loving the chance - or excuse- to read them all over again, struck by the humor, and the clever rhymes, and diversity of the characters. This ode to childhood and friendship is poignant for the adults, but has brought extreme joy to children for nearly a century- which is a testament to their agelessness.

Spying this book at the library, this past week, I couldn't resist checking it out. This time, with my children grown and living their own lives, I have no 'excuse' to read these stories again, but you know what? You don't need a reason or excuse to read these classic, delightful adventures. Winnie the Pooh and his cohorts tug at the hearts of both young and old alike!

What better way to spend a cold, dreary day than with Christopher Robin and Winnie the Pooh, being reminded of the many hours of joy they gave you and the great memories they bring back of special times spent reading these books to my own children?

Maybe the best thing, though, is seeing these diverse characters stand the test of time, and feeling at peace knowing these special and gentle stories will continue to delight children and their parents for many more generations to come!! 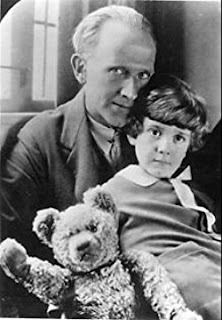 Alan Alexander Milne was born in London on January 18, 1882, the third and youngest son of a schoolmaster. At age eleven, he won a scholarship to the Westminster School. He went on to attend Cambridge University and became the editor of the undergraduate paper, Granta. After graduating from Cambridge in 1903, Milne moved back to London with enough savings to live for one year. He was determined to become a writer. By 1906, he had been offered the position of Assistant Editor at Punch, a classic British humor magazine. He remained at Punch for the next eight years.
In 1913, Milne married Dorothy de Selincourt (known as Daphne) and moved to a house in London's Chelsea section. When World War I broke out, he enlisted in the Royal Warwickshire Regiment, eventually serving in France. During his training period, he wrote his first play, Wurzel-Flummery, which was produced in London in 1917.
By 1919, having completed one book and several plays, Milne finally achieved financial independence. His play, Mr. Pim Passes By, previously staged in London, was produced by the Theatre Guild in New York City. It was as great a success there as it had been on the London stage. Milne was now well established as a witty and fashionable London playwright. In 1920, Christopher Robin Milne was born, an event that was to change the history of children's literature. In 1923, during a rainy holiday in Wales, Milne began work on a collection of verses for children. The result was When We Were Very Young, published in 1924.
Demand for Milne's whimsical work was overwhelming, and in 1926, he duplicated his earlier success with the publication of Winnie-the-Pooh. The sequel, The House at Pooh Corner, followed in 1927. Now We Are Six, another charming collection of verse, followed one year later. It was through these four books, all illustrated by the wonderfully talented Ernest H. Shepard, that Milne acquired a vast audience outside of the theater. In the years since their initial publication, interest in these books has grown and grown.
Milne continued to be a prolific essayist, novelist, and poet until his death in 1956.