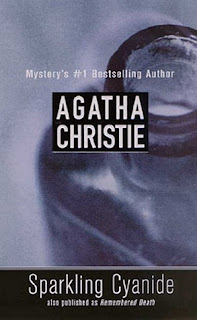 It's been less than a year since beautiful heiress Rosemary Barton took her own life during a birthday dinner in her honor. Her husband George never believed that his fun-loving wife would commit suicide--especially now that he's received two anonymous letters that suggest cold-blooded murder. One implicates even George himself. It's true he long suffered Rosemary's infidelities. But what about her embittered sister who was left out of the family will? Or any of Rosemary's secret lovers, not to mention their betrayed wives? Not one of them has ever forgotten Rosemary. Nor has any one of them ever forgiven her. But only one of them killed her...

Sparkling Cyanide by Agatha Christie
My rating: 4 of 5 stars


Sparkling Cyanide by Agatha Christie is a 2001 Minotaur publication. (Originally published in 1945)

It has been a long time since I read a book by AC. With a nip in the air and the days getting shorter, I always find myself in the mood for a good old fashioned golden age mystery to curl up with.

This classic whodunit is very cleverly plotted and centers around Rosemary Barton, a beautiful young heiress who suddenly committed suicide.

Now one year after her death, her husband, George, begins receiving anonymous notes suggesting his wife may have been murdered. Thus, unfolds the sordid tale of the events leading up to Rosemary’s untimely death.

George then plans to host a remembrance party for Rosemary, inviting all the people who were present at the dinner when Rosemary decided to end her life. He is determined to discover if his wife was indeed murdered, and if so, by whom.

This classic mystery hit the spot. It was perfect for the mood I was in, plus it is a Christie novel that I had never read.

This book was originally published in 1945, but it has certainly aged well. I thought the dialogue was crisp and sharp, with the entertaining trademark twists Christie was so gifted with.

I thoroughly enjoyed this quick and easy mystery and think I’ll start working more of these titles into my reading schedule more often. 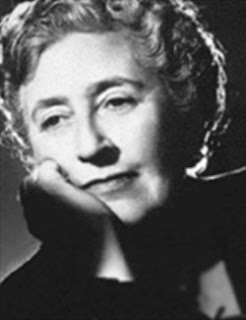 Agatha Christie was born in 1890 and created the detective Hercule Poirot in her debut novel, The Mysterious Affair at Styles (1920). She achieved wide popularity with The Murder of Roger Ackroyd (1926) and produced a total of eighty novels and short-story collections over six decades.
Posted by gpangel at 1:00 AM