The Man From the Train: The Solving of a Century-Old Serial Killer Mystery- by Bill James and Rachel McCarthy James- Feature and Review 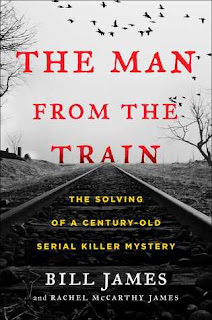 Using unprecedented, dramatically compelling sleuthing techniques, legendary statistician and baseball writer Bill James applies his analytical acumen to crack an unsolved century-old mystery surrounding one of the deadliest serial killers in American history.
Between 1898 and 1912, families across the country were bludgeoned in their sleep with the blunt side of an . Jewelry and valuables were left in plain sight, bodies were piled together, faces covered with cloth. Some of these cases, like the infamous Villasca, Iowa, murders, received national attention. But few people believed the crimes were related. And fewer still would realize that all of these families lived within walking distance to a train station.
When and true crime expert Bill James first learned about these horrors, he began to investigate others that might fit the same pattern. Applying the same know-how he brings to his legendary baseball analysis, he empirically determined which crimes were committed by the same person. Then after sifting through thousands of local newspapers, court transcripts, and public records, he and his daughter Rachel made an astonishing discovery: they learned the true identity of this monstrous criminal. In turn, they uncovered one of the deadliest serial killers in America.
Riveting and , with writing as sharp as the cold side of an , The Man from the Train paints a vivid, psychologically perceptive portrait of America at the dawn of the twentieth century, when crime was regarded as a local problem, and opportunistic private detectives exploited a dysfunctional judicial system. James shows how these cultural factors enabled such an unspeakable series of crimes to occur, and his groundbreaking approach to true crime will convince skeptics, amaze aficionados, and change the way we view criminal history.

The Man from the Train: The Solving of a Century-Old Serial Killer Mystery by Bill James
My rating: 4 of 5 stars

The Man from the Train: The Solving of a Century-Old Serial Killer Mystery by Bill James and Rachel McCarthy James is a 2017 Scribner publication.

A most unorthodox approach to True Crime, but interesting and fascinating.

Right from the start, the author explains he mainly writes books about baseball. I know nothing about the sport or the statistics that Bill James writes about. But, whatever it is he writes about the sport, it obviously requires the ability to analyze, theorize, and puzzle out various probable outcomes. For name is very recognizable, but this is my introduction to his writing.

When Bill stumbled across ‘the first crime’, his natural instincts prompted him to scratch beneath the surface and do a little digging. Before long he had found several other similar crimes, and so he commissioned his daughter, Rachel, to help him with the research.

This book is the result of what looks like a great deal of painstaking and time consuming exploration. The sheer volume of crimes is shocking. We are talking about WHOLE FAMILIES that were slaughtered!! But, uncovering similar crimes was only the beginning.

The authors attempt to connect the dots and find commonalities between these ghastly killings hoping to find a pattern that would link the crimes, which would hopefully lead to pinpointing whom ‘the man from the train’ might be.

True Crime enthusiast might be taken aback by the writing style or approach the author chose to employ. He speaks to the reader as though is expects them to be highly skeptical, imploring them to just hear him out, to try out his theory, to look at what facts are available, to take into consideration the approach to crime solving nearly a century ago, to see if maybe he might be on to something after all.

Sometimes, it felt as though he were speaking to me directly, which was effective in that I found myself paying rapt attention to his narrative, almost as though I a student and he a professor. I think I absorbed more details that way, but I also felt like he was trying too hard sometimes, or trying to sell me snake oil on a few occasions. But, I enjoyed the challenge and the opportunity to exercise my critical thinking skills.

However, there were times he mentioned a random event or crime, then told me he had no intention of delving into that situation, or he would get back to it later, or that it had nothing to do with these crimes, which was very distracting, and I wondered why he even brought it up in the first place.

But, I did find myself caught up in his enthusiasm, and was determined to keep an open mind. It is obvious that besides the research, that much thought went into how these crimes were connected- or not- in some cases. He explains why those arrested or suspected were probably innocent, and proceeds to lay out a case for the defense or prosecution, as the case may be.

As the title of the book suggests, Bill believes the killer traveled by train, chose victims close to a train depot, perhaps to put distance between himself and his crimes once they had been committed.

Law enforcement typically looked inward at those living nearby, or connected to the community in some way, and often pinned the crimes on the uneducated, the poor, or minorities. Some suspects were convicted without due process and some were released due to lack of evidence.

The murders do have a few striking similarities- an ax always the murder weapon, no valuables were stolen, and the victims lived close to a railway track or depot, just to name a few.

The author laid out each instance of mass murder, the towns in which they lived, the suspects, and if they believed the murders were linked or not. It is an amazing and surreal connection of dots, but sadly, there is not on shred of actual concrete proof, forensics, witnesses, etc. If this case were indeed brought into a court of law and presented before a jury, it would all be circumstantial conjecture.

The authors do eventually present their prime suspect, then proceeded to apply a unique mathematical percentage method to measure the probability their guy could have committed each individual set of murders, how he may have selected each family, how he escaped, and how he remained at large, and if or why he may have stopped killing.

The one downside, is that the title is just a bit misleading, since it is really up to you, the reader, to decide to convict based on the information presented. You may or may not believe the case is solved.

Overall, this was a very fascinating read, with a fresh approach and presentation. It is nearly impossible to know for certain if they have guessed the real identity of the ‘man the train’, or if these mostly forgotten crimes are indeed the work of one killer, but I think the authors did an amazing job of collecting evidence and researching police procedures of the era in question.

I’m on the fence about how much stock I put into the some of the author’s theories but overall, I believe they make a compelling case. 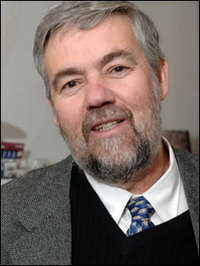 George William “Bill” James (born October 5, 1949, in Holton, Kansas) is a baseball writer, historian, and statistician whose work has been widely influential. Since 1977, James has written more than two dozen books devoted to baseball history and statistics. His approach, which he termed in reference to the Society for American Baseball Research (SABR), scientifically analyzes and studies baseball, often through the use of statistical data, in an attempt to determine why teams win and lose. His Baseball Abstract books in the 1980s are the modern predecessor to websites using such as Baseball Prospectus and Baseball Primer (now Baseball Think Factory).In 2006, Time named him in the Time 100 as one of the most influential people in the world. He is currently a Senior Advisor on Baseball Operations for the Boston Red Sox. In 2010, Bill James was inducted into the Irish American Baseball Hall of Fame.

Rachel lives in Lawrence, KS with her husband Jason. She studied creative writing at Hollins University, and her work has previously been featured in publications including Bitch, Broadly, and The New Inquiry. The Man from the Train is her first book.
Posted by gpangel at 1:00 AM