The Last Mrs. Parrish by Liv Constantine- Feature and Review 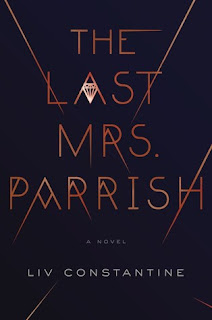 A mesmerizing debut psychological thriller full of delicious twists about a coolly manipulative woman who worms her way into the lives of a wealthy “golden couple” from Connecticut to achieve the privileged life she wants.
Amber Patterson is fed up. She’s tired of being a nobody: a plain, invisible woman who blends into the background. She deserves more—a life of money and power like the one blond-haired, blue-eyed goddess Daphne Parrish takes for granted. To everyone in the exclusive town of Bishops Harbor, Connecticut, Daphne and her husband, Jackson—the beautiful philanthropist and the confident real estate mogul—are a golden couple straight out of a , blessed with two lovely young daughters.
Amber’s envy could eat her alive . . she didn't have a plan. Amber uses Daphne’s compassion and caring to insinuate herself into the family’s life—the first step in a meticulous scheme to undermine her. Before long, Amber is Daphne’s closest confidante, traveling to Europe with the Parrish family, and growing closer to Jackson. But a skeleton from her past may undermine everything that Amber has worked towards, and if it is discovered, her well-laid plan may fall to pieces.
With shocking turns and dark secrets that will keep you guessing until the very end, The Last Mrs. Parrish is a fresh, juicy, and utterly addictive thriller from a diabolically imaginative talent.

The Last Mrs. Parrish by Liv Constantine
My rating: 4 of 5 stars

The Last Mrs. Parrish by Liv Constantine is a 2017 Harperluxe publication.

Daphne meets Amber at the gym, where they discover they share a terrible tragedy in common- the death of a beloved sister due to Cystic Fibrosis. The women, though from very different worlds, form a close bond.

Before long, Amber has become Daphne’s confidante, while also working for her CF foundation, and even helps Mr. Parrish went he needs an assistant.

But, Amber has plans, big plans, and in order to achieve her goals, she will walk over and step on anyone in her path- even Daphne-

This story was chilling, clever, and sinfully entertaining. Amber gets to set the pace in the first half of the book as she describes her cunning, and very manipulative nature. She’s not the timid, sweet, impressionable woman she appears to be.

Once she has clued us in on her diabolic plans, and once she has seemingly gotten what she came for, the story shifts gears, and Daphne takes control of the wheel.

It’s at this point, things really get interesting-

There are many breadcrumbs left on the trail, and if you follow them you probably won’t be all that surprised when you learn all that glitters, isn’t gold. But, that’s only part of the picture. Those who appear naïve, those appear in control, those who seem like innocent bystanders may not be as naïve, innocent or as in control as they appear.

By the time we get to the last section in the book, that old phrase about ‘what goes around comes around' came to mind, along with a few other books or movies in which the tables are turned in spectacular fashion, and revenge is carried out with carefully constructed scheming.


The book is not too big on shock and awe, instead opting for a stylish noir type atmosphere, which is more understated than many novels that land in this sub-genre, but it gets the job done, just the same, without going off the rails with unnecessary plot twists.

The characters were not overly developed, as we only see them in certain contexts, with was key to the story, nor did they evoke deep feelings or emotions, other than disdain or dislike, but by the time all is said and done, I had an enormous amount of respect for some of them.


What makes the novel work is the careful arrangement and pacing. The twists weren’t really all that surprising, but they are still delectable and immensely entertaining. The story is a bit of a cautionary tale, a warning to beware of what appears on the surface, to never judge a book by its cover, or blindly trust people. But, it was also a story of escape and empowerment- albeit, one with an unconventional approach, as well as a tale of retribution- which was the most satisfying part of this enjoyable parable.


Overall, this is an impressive debut novel, and I look forward to seeing what else these talented sisters will entertain us with in the future. 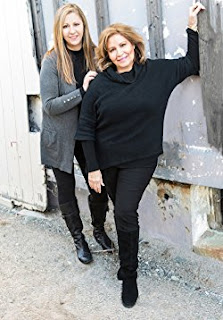 Constantine is the pen name of sisters Lynne Constantine and Valerie Constantine. Separated by three states, they spend hours plotting via FaceTime and burning up each other’s emails. They attribute their ability to concoct dark storylines to the hours they spent listening to tales handed down by their Greek grandmother. THE LAST MRS. PARRISH is their debut thriller. Rights for THE LAST MRS. PARRISH have been sold in 19 other territories, including Spain, Brazil, Portugal, Poland, Sweden, Finland, Norway, Denmark, Holland, Germany, Hungary, Italy, France, the Czech Republic, Turkey, Korea, the UK, China, and Russia. Visit their website at www.livconstantine.com